Kund Malir — for the love of seas, mountains and deserts

* Kund Malir is located along the Makran Coastal Highway, 240 kilometres away from Karachi 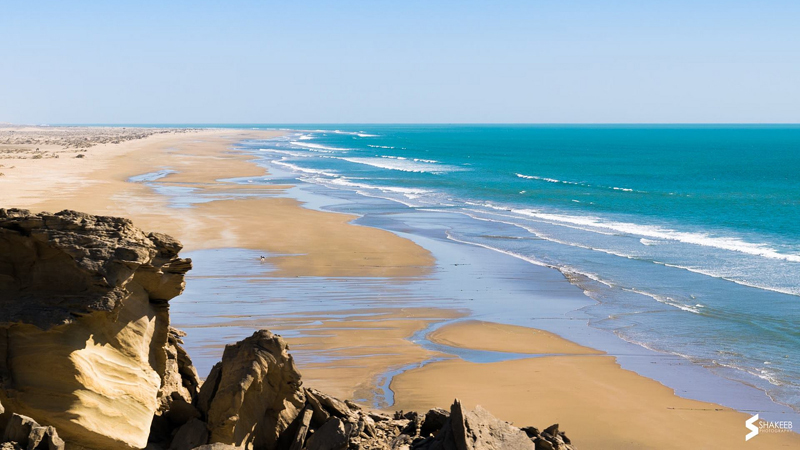 The sea, the mountain and the desert! If those interested in nature find these views in one place, they are drawn to it like a magnet.

Kund Malir is located along the Makran Coastal Highway, 240 kilometres away from Karachi.

Travelling from Karachi to the Regional Cooperation for Development Highway, one has to turn left to go to Kund Malir and the sign here is a statue of ‘Prince of Hope’ which reminds you that the journey is from Makran Coastal Highway.

The Makran Coastal Highway extends to Gwadar and there are archaeological, religious and recreational places on both sides of the road.

Among them is Hangul National Park, where many beasts and birds and “Markhors” are also found.

In the lap of Hangul National Park, there is also the temple of Nanni Temple of the Hindu temple and the most unique is the clay hill called Chandra Gupta, which drains the soil with air pressure.

Kund Malir is a small town of Baloch fishermen, situated on a hill while the sea flows in its footsteps. Blue water and waves over the white sand attract the passers-by.

The construction of Makran Coastal Highway and the popularity of Kundu Malir on social media have given tourists an address here and now, besides the holidays, on the occasions of festivals are seen with their families enjoying the sea blue waters.

Kund Malir was included in the 50 most beautiful beaches of Asia last year. This ranking was done in terms of tourism and photography.

The sea is not much deeper here than the renowned beaches of Hawke’s Bay, Mubarak Village, and Kaka Pir, and that is why children and women also descend into the seafloor.

Despite being located in Balochistan, the majority of tourists coming to Kund Malir are from the people of Karachi, the capital of Sindh province, who come here in private cars or with tour groups.

According to those who come here says, ‘The Sea is clean here, there is also isolation, there is no rush of people. Families can come here because it is safe. ‘Furthermore, they did not see any dirt here the beaches of Karachi have dirty There are lying to children’s Pampers.

Most tourists coming to Kund Malir are on a ‘day trip’ but there are also people who spend the night here on the shores of the beach.

In this connection, some huts have also been constructed on the coast but their rent of Rs 15-20,000 is not within the reach of the middle class. There are several huts along the coast that are available in fifteen hundred to a thousand, and the majority of tourists to stay in.

Separate public toilets are also made for women and gentlemen and can be used after payment of Rs 30 per person.

Due to a lack of electricity, night tourists bring in generators or charged lights. ‘There is a very calm and tranquil environment and great scenery.

Travelling from Karachi to the Regional Cooperation for Development Highway, one has to turn left to go to Kund Malir and the sign here is a statue of the ‘Prince of Hope’ which reminds you that the journey is from Makran Coastal Highway

In my opinion, If a little ramp is built on the coast, huts are built and some facilities are provided, many more people will come here.

If you feel hungry after swimming in the sea, there is also a hotel on the coast of Kund Malir, where a meal containing lentils, vegetables, poultry, and rice is available at reasonable prices. Or make it from home. Food is available, but the drinking water is rare here. One tanker gets five to seven thousand rupees while the local population receives fresh water from the well. Therefore, tourists visiting Kund Malir should remember to take drinking water with them.

The journey from Karachi to Kund Malir is about 250 km and because of the long journey, it is important to take care of food and water as well as fuel. There is no large population on the way from Winder to Kund Malir. In some areas, mobile phone signals also disappear, but some networks continue to work.

The Balochistan government has also decided to build a resort on Kund Malir, however, there is no rescue and no hospital is available in the remote. Here, the clean water and the pollution-free environment is a real beauty.

The tourists who come here have a duty to keep the beach clean, throwback the garbage they bring in any trash box or place otherwise here condition will be as Karachi.

Bathing in the sea of Kundu Malir and taking a walk on the coast if your heart is full, another 24 km from here is a tourist attraction of interest and that is the unique texture of the mud that has been built for many centuries. The air passing through has carved out something as if they were an artist’s craft.

Wherever they look for a glimpse of the famous Egyptian monastery, an ancient fortress wall appears. A hill between these mountains has been named ‘Princess of Hope’.

This clay mound looks like a princess wearing a frock and crown on her head. Hollywood actress Angelina Jolie has given this mysterious statue the nickname ‘Princess of Hope’ and has given it a global reputation.

The scenic nature that can be observed on both sides of the Makran Coastal Highway are like an open museum. Tourists can make a quick stop breathe in the stunning views and take pictures.