Sobremesa is for cheese lovers only

* We were initially served with cheese fondue sliders, which as the name suggests were mini chicken burgers with dollops of cheese being poured upon it from the fondue 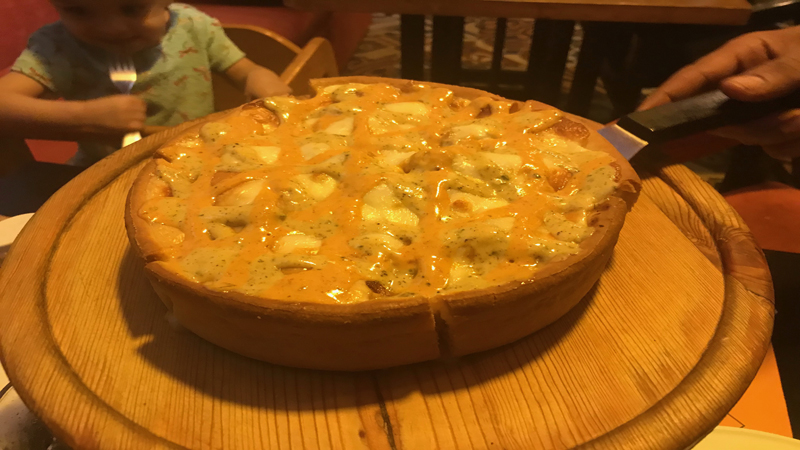 Let us not fool ourselves, apart from biryani, daal chawaal and other desi favourites Pizza too is one of our most beloved meals. Some call it peeza some choose to call it pizza, there maybe dispute in how you would you like to pronounce it but one thing is for sure, you would definitely want to have at least one slice. After the steady rise in the 90’s of the pizza through Pizza hut in mainstream food culture here, the next big innovation that caught the local food scene by storm were the new York size pizza slices, where a single slice was filling enough due to its sheer size, then it was back to basics with hipsters gravitating towards the thin crust ,wood fired oven, authentic Italian pizzas. Now, how does one reinvent the wheel or in this case, the pizza to stand out in a saturated market. By going deep.

Enter Sobremesa, one of the handful of restaurants serving Chicago Deep Dish pizza- which essentially is a pizza pie or a pizza cake (if you are more imaginative). The word is Spanish for sitting after a meal , chatting, having coffee, playing cards-basically feeling a sense of community revolving around food. Tucked away in Khayaban E Shujaat right behind the Chaayekhaana café, one is greeted by the inscription: ‘you cant buy happiness, but you can buy deep dish pizza and that kind of (sic) the same thing’. Is it? Read on.

The restaurant a combined project of the brother sister duo, Farina and Rizwan Niazi attempts to be innovative but is a little rough around the edges when it comes to execution

We were initially served with the cheese fondue sliders, which as the name suggests were mini ‘chicken burgers’ with dollops of cheese being poured upon it from the fondue which was being warmed by a flame underneath. The melted cheese was poured over the taste of the sliders, which is a good thing if you are a cheese lover. Then came the Koeran Chicken which were chicken skewers glazed with spicy Korean sauce and peppered with sliced green chillis and sesame seeds sprinkled over it served with a side of melted cheese, that would be rolled around the skewers by the server. Due to a glitch in the electric stove that warms the cheese, it was less than an ideal experience with the cheese going cold really fast. Now came the star attraction, the Deep Dish pizza. The pizza much like the previous entrees was cheese galore, with the cheese overpowering the taste of other ingredients. It had this rich streaks of cheese when taking out the deep dish slices which always make for quite the spectacle. 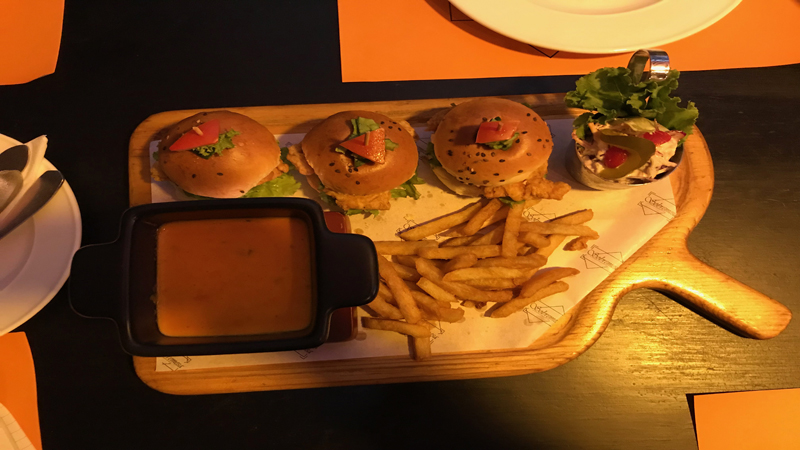 It was definitely not the best pizza I have had, but still worth a try for novelties sake. Our choice of beverages: the lychee slush, the citrus peach cooler or the ‘White Lady’ – cocktail of pineapple, lychee and lime were all explosions of sweetness with the notable exception of the citrus peach cooler. The excessively sweetened drinks were nauseating after a few sips.

To finish things off, there was the hit me dessert which yes, you guessed it was a pyramid of chocolate that shatters when you strike with a spoon which we happily obliged. Boston cream oozed out with a brownie in the middle. Aside from the theatrics, there wasn’t a lot going on for the dessert taste wise. The restaurant a combined project of the brother sister duo, Farina and Rizwan Niazi attempts to be innovative but is a little rough around the edges when it comes to execution. But if you want a different pizza experience or If you are a cheese lover, this is the place to go.