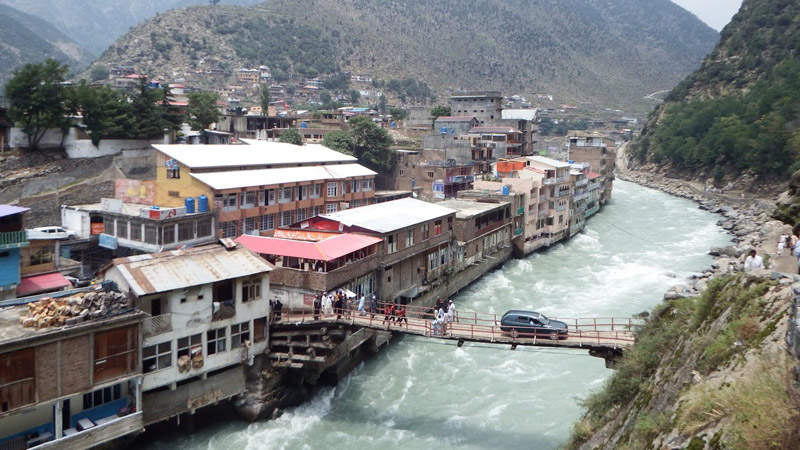 Swat, commonly known as the Switzerland of Pakistan, is acclaimed not only for the production of peaches, Japanese fruits and apples, but also it is a heaven for tourists as it’s full of stunning streams, lush green mountains, snow-capped peaks and last but not the least, the mighty Swat River.

These were used to be a main source of earning for native people and then years back, the territory was hinged by extremists who wanted to implement their constitution based on so called Islamisation. This resulted in confrontation and massive demolition took place. Peace was just trying to hide itself from the types of brutality which a normal mind and body can hardly digest and believe in such oppression. Normal life was seized as movement was restricted and freedom lost its value before shrapnel and bullets. You were not allowed to go to barber shop, women’s education was strictly prohibited, death penalty for music shop owners and anti-polio vaccination campaign was prevented by the extremists. These are just few examples of tyranny which were experienced by people of swat. To annul the control of swat by Taliban, Pak armed forces started operation in October 2007. It was successful operation first when militants faced cosmic deprivation and have had to leave major areas of swat as Pak army took control of major posts. Operation Rah-e-Haq was divided into three phases from 2007 to 2009. Army utilised heavy artillery and airborne support. Despite of covering most of the check posts by army, game of control was still changing again and again. This operation concluded with the commencement of another operation ie Operation Rah-e-Rast which began in May 2009. This operation was a final assault. More than two million civilians were displaced from their homes. More than 2,000 militants were killed in this operation. A total of 15,000-45,000 army personnel participated and it led to the arrest of many TTP leaders.

Now what was the impact of these operations that lasted for more than three years is an important question to answer. In this type of atmosphere, one cannot deny the fact that weapons were more common in the land of Swat than fruits as farmers suffered 67 percent loss of agriculture production. Before the conflict, the total worth of Swat fruit farms was $88.5 million per year. The territory was then notoriously called as no-go area. Foreign aid proven buck up to revive life again in swat. UAE, European and Qatar aid remarkably shown its presence along with USAID special funds for flagging tourism. This was the time for swat to stand up again to gain the glory again but definitely it was a slow and steady process to achieve the target.

If you ever visit Swat, you will experience one thing that is much more noticeable than the glittering scenery and that is the hospitality of its locals. They are warm and welcoming even today after facing bloodshed of three years. Swat Valley is also rich in centuries old cultural heritage.

Swat restored its position in tourism department of Pakistan and is now again considered as main asset for generating revenue. According to global figures, tourism sector is contributing more than $8.8 trillion per year and 318 million new jobs according to the statistics of 2018. Spain, Thailand, UK, and Germany are among the top countries where tourists flow is even greater than any other country. In 2017, Pakistan generated $875 million revenue from tourism and it has capacity to increase much as we have glorious spots. Recently, at Eidul Fitr eve, more than a million visitors entered Swat and it was more than any other visiting place of Pakistan. One of the scenic places that are most visited by tourists are Madyan, Marghazar, Miandam, Kalam, Bahrain, Malam Jabba and recently one of the most beautiful valley has been explored i.e. Kumrat valley. Peochar, once used to be a main centre of militants but now a perfect site to visit. Provincial government is taking every necessary step for the improvement in providing facilities to tourists. But there are some issues like traffic control and roads condition need to be solved on urgent basis. Bahrain-Kalam and Bahrain-Malam Jabba road is in reconstruction phase which need to be completed as early as possible as it is also creating problems for local community and tourists hesitate to travel in these revenue generating areas. On the other hand, Swabi-Swat motorway is another milestone in providing not only a safe and secure way of reaching their destination but also the transport of goods like fruits which took longer time and were more prone to rotting when supplied through other routes. Price evaluation for hotel rates in these areas where tourists are forced to pay heavy amount for living must be examined on regular bases. Rest-houses are opened only in main cities but not the scenic sites where there is a need of accommodation for tourists. In educational institutes, tourism programs must be initiated. Women are much safer in swat than before and they are taking interest education with full zeal and zest. Now Swat is getting international status for tourism and this is the whole journey from terrorism to tourism.

The writer is based in Bhakkar and can be reached at ammarsaleem797@gmail.com