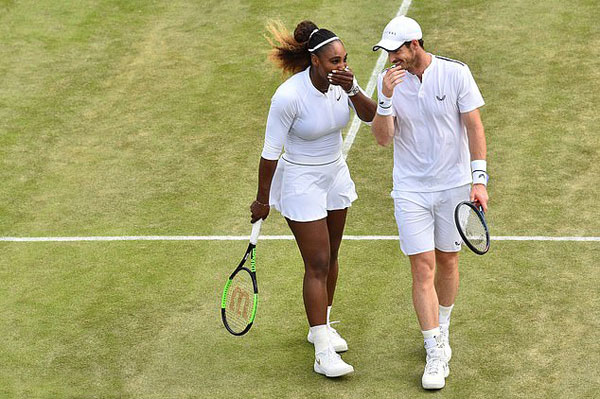 Wimbledon is over for another year, with Novak Djokovic winning the Men’s Singles ttile and Simona Halep picking up the Ladies’ Singles title.

Following two weeks of brilliant action, there has been plenty to talk about on the back of moments of high incident.

Sportsmail’s expert MIKE DICKSON has pulled together his highs and lows from another brilliant year of the competition.

Best match: Prior to the men’s final, and as was the case last year, Rafael Nadal was involved in both. Contests against Nick Kyrgios and Roger Federer were hyped to the heavens, and somehow they came close to fulfilling expectations. The Kyrgios match just shades it for its unusual mixture of strangeness, brilliance and personal enmity.

The third round between Coco Gauff and Polona Hercog was not necessarily the Grand Cru in technical terms, but as an absorbing battle with some fascinating human dimensions it was hard to beat.

Best talker/worst talker: Simona Halep, not previously a sweetheart of the Centre Court, charmed the birds from the trees with her acceptance interview on Saturday, and in press conferences can be relied upon not to succumb to groupthink.

The worst performer in press conferences award can hereon be known as winner of the Venus Williams award, named after the player has performed the unusual trick of becoming ruder and less articulate with age.

Royal Box guest of the fortnight: Woody Harrelson showed, er, stamina in watching the men’s doubles final only for his refuelling habits to be caught on camera and shared via social media.

It should be said that Woody is a regular visitor to tennis, and has a reputation for being a genial and down-to-earth guest.

So long, farewell: Cyprus’s former semi-finalist Marcos Baghdatis played his last match and emptied out the contents of his bags in a mass giveaway of equipment to the crowds. Maria Sharapova, not quite such a universally popular figure, spoke as if there were doubts over whether she would return.

Doubles karma: The machinations of who plays with who caused plenty of intrigue, and probably the odd ripple of schadenfreude thereafter in certain quarters. Andy Murray’s partner Pierre Hugues Herbert, Jay Clarke and others were among those who failed to prosper after upsetting their partners. Nicolas Mahut had the last laugh on Herbert by making the men’s doubles final.

Nice to see you: The all-star dream team of Serena Williams and Andy Murray did not sweep all before them but seeing the twice-singles champion back at SW19 warmed the heart. Next year he will be back, hopefully, in singles combat but it should not be underestimated how much will have to go right for that to happen.

Biggest fail: The next generation of men’s players continues to be worryingly invisible, with no end in sight to the dominance of the three titans. The gestation period of the new stars is starting to make that of an elephant look short. Say what you like about Nick Kyrgios, at least he stood up to challenge Rafael Nadal.

Most welcome newcomer: Coco Gauff, by a landslide. A real player and impressively articulate with it, the 15 year-old provided a huge shot in the arm to the tournament and was partly responsible for a surge in American TV viewing figures. She will need to handled carefully from here. With a potential 20 or more so Wimbledons to play, this need not be a young woman in a hurry.

Biggest fine: The book was thrown at Bernard Tomic, aka The Tank Engine, due to his previous in this department. His swingeing fine of £45,000 actually sparked an intelligent debate about where the boundaries should be on judging how much a player has tried or not. You do not want to crush the sport’s more mercurial characters, but there are limits to indulgence.

Press conference drama: A national debate, almost eclipsing the news weightier matters such as the departure of Britain’s man in Washington, ensued after Jo Konta’s caustic exchange with a newspaper reporter. Hard questioning? Yes. Sexist? No.

The more melancholy incident was a double Grand Slam champion curtailing her interview as she was overcome with emotion – Gauff’s handlers please take note.

Best innovation: The Court One roof was a welcome addition, and made scheduling easier. The newly expanded Court 12 has been nicely expanded and looks impressive, now a better arena than Court 3. A couple of suggestions for next year: the introduction of an on court shot clock and restrictions on dubious toilet breaks.

The Brit Awards: A benign set of draws meant that there was no first week Brit wipeout, luckily for the LTA. While her run ended in disappointment and some controversy, it should not be forgotten that Jo Konta followed up her French Open semi by taking out two top ten players and making the last eight, a fine effort when all was said and done. An honourable mention, too, for Dan Evans.