* The show will not go on for long, Hamza tells PM Imran 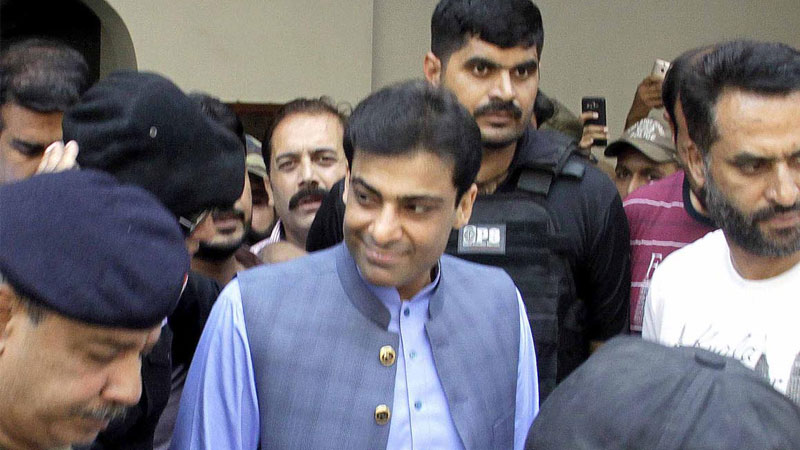 Hamza had appeared before the accountability court along with his father Shehbaz Sharif in the Ramzan Sugar Mills case.

The National Accountability Bureau (NAB) had requested for an extension in the remand of Hamza, however, the court rejected the accountability watchdog’s plea and sent the PML-N leader to jail.

The court has ordered Hamza and Shehbaz to be presented before the court on July 20.

Hamza, along with Opposition Leader in National Assembly Shehbaz Sharif, was indicted in the Ramzan Sugar Mills case on April 9.

In February, the NAB had filed a reference against the two alleging that the former chief minister of Punjab misused his authority by using public funds for the construction of a bridge to facilitate the Ramzan mills, owned by his sons.

Meanwhile, talking to the media outside the accountability court, Hamza warned Prime Minister Imran Khan, saying that he should worry about himself and the government should not dish out what it couldn’t take. “What happened with Rana Sanaullah was not an arrest but a joke with the public. The entire nation is laughing at this,” he said. “This show will not go on for long. The entire nation knows how this case was made on Rana Sanaullah,” Hamza added.

He added, “Even after 72 years, cases of cow stealing and drugs could not be closed. The government should stop with the political revenge and come forward. The government show not dish out what it cannot take. When they could not find anything against Rana Sanaullah, they made a case about drugs on him.”

The PML-N further said, this is a difficult time for the nation and hopefully this time will pass. “The nation is standing with the opposition,” he said.

“Imran Khan is engulfed in hatred and fear. I am not worried about myself and I do not care about the production order. Imran Khan should worry about himself,” Hamza added.