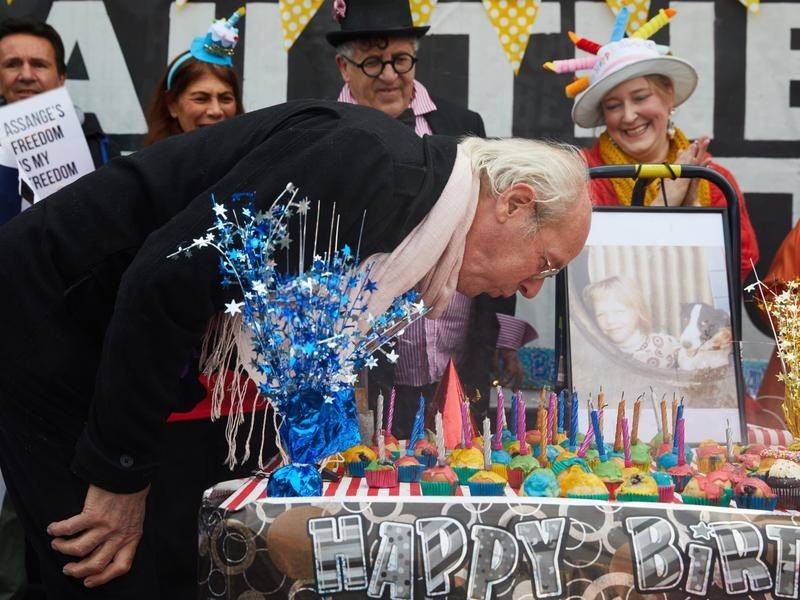 Julian Assange’s father has celebrated his son’s 48th birthday in Melbourne, saying his son is determined to fight for his freedom.

Assange’s dad, John at his son’s celebrations. I had a chat to him about how his son is doing. More to come via AAP pic.twitter.com/Tl63FYCCsu

John Shipton joined a crowd of supporters at Melbourne’s Federation Square on Wednesday to record a video message singing Happy Birthday to the Wikileaks founder.

Mr Shipton lamented that he’d prefer to celebrate with his son in person.

“It’s very distressing and one can’t think too much about it without becoming overwrought, so it’s best to attend to practical matters, to assure that Julian can come home and we can have a cup of coffee together at Fed Square,” Mr Shipton said.

Mr Shipton says Assange is determined to keep fighting US attempts to extradite him from the UK over computer hacking allegations.

Assange is serving a 50-week prison sentence for skipping bail, after being holed up in London’s Ecuadorian embassy for seven years to avoid extradition to Sweden on a rape accusation, which he denies.

The US has charged the Australian with numerous offences, including espionage, over allegations he published secret documents hacked from the Pentagon containing the names of confidential military and diplomatic sources.

“His health has stabilised and his spirit is extremely strong, and (he is) determined to fight for his freedom and for freedom of press to inform us of what our governments are doing,” Mr Shipton said.

Melbourne is one of 60 cities participating in the global celebrations held across seven continents in honour of Assange’s birthday.

Australian barrister Greg Barns, who is campaigning to bring Assange home, called on Australians to remember the importance of free speech.

“Those calling for greater support for freedom of the press need to be putting it also in the context of Julian Assange, who is an Australian and suffering as a result of an attack on the free press,” Mr Barns said.

The birthday party will be followed by a candle vigil on Wednesday evening in Melbourne, and across the country.