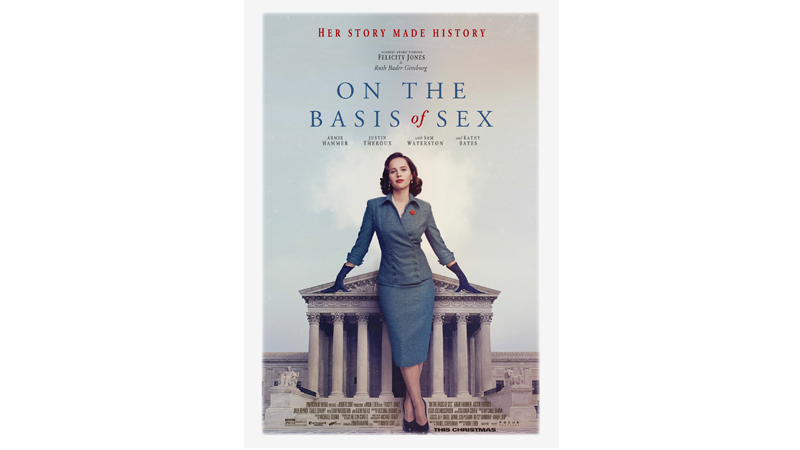 “A feminist is anyone who recognises the equality and full humanity of women and men” ? Gloria Steinem. In the middle of the film ‘On the Basis of Sex’, we see a passionate teen Jane arguing with her mother, now, a revered figure in the United States justice system-Ruth Bader Ginsburg (RBG) on attending a protest including/led by Gloria Steinem. This time is much famous in the American history. And in the history of women rights, civil rights and the second wave of feminism, imbued with the protests and cultural change in the American society. Crucially pertaining to the women rights and rights regarding race, it is the 50s, 60s and then the 70s that are covered in the film in pieces marking Ruth Bader Ginsburg’s ascendancy from a law student at Harvard and then winning her first case against a tax deduction law regarding discrimination on the basis of sex; declaring it unconstitutional. Interestingly, this discrimination heralds the win for a male caregiver and not a female. Also, what can be seen from the title and continuous argument in the film is the use of the word sex, the emphasis on it. Alluding to the fact that the word itself is blunt, risky and would be an automatic insinuation to disgrace.

The film starts with RBG as the only select few females who get the privilege of attending a law school and that too a prestigious one – Harvard. It is there, where her husband Marty Ginsburg is a second year law student. The film of course as citied by leading international publications does not do justice to RBG’s exemplary life and does not come close in charting her role as a woman who went onto set precedents of making ‘legal’ discrimination on the basis of sex unconstitutional under the American legal system. But it is this film, that shows some very fine performances by Felicity Jones playing RBG and Armie Hammer playing her husband Marty Ginsburg-who too was a tax attorney expert. What it though sends out for the audience is the remarkable marriage, and the level of support that can be seen through and in the effortless portrayal of Marty Ginsburg by Hammer. As NYT’s review put it something like this ‘Armie Hammer is to On the Basis of Sex, what Felicity Jones was to The Theory of Everything.’

Taking down our own example, we have seen the struggle of Asma Jahangir and Hudood Ordinance of the many practices and legal condoning of such laws, that continue to sabotage the rights and pleas of millions of women around Pakistan. If we go on to compare the legal systems of both the US and Pakistan presented in film and otherwise, it definitely would be absurd

During these times, in Pakistan with the unusual and insurmountable attention given to the Aurat march and feminism and all sorts of things that can easily be labelled as Yahoodi Sazish. On the Basis of Sex should have been screened. In the midst, of all the slogans that were seen to be shredded to pieces on social media, women from all walks of life have been fraught with the sexual and gender discrimination that is not one but one of the most pressing and pertinent of all the hindrances.

Taking down our own example, we have seen the struggle of Asma Jahangir and Hudood Ordinance of the many practices and legal condoning of such laws, that continue to sabotage the rights and pleas of millions of women around Pakistan. If we go on to compare the legal systems of both the US and Pakistan presented in film and otherwise, it definitely would be absurd. Other than the fact of human nature, psychology and reaction-that can be seen in the argument presented by Defence Attorney of the Justice Department, James H Bozarth stating that RBG and his co-counsel Marty Ginsburg were working after to sort their ulterior motives and take on a radical social change that would destroy the American values oriented towards family, and prescribed roles of both the genders.

But if we see the struggle that was before us and still continues to shake the ground beneath the feet of men and women, who incessantly go on to slur the very character of women demanding a natural, justifiable change in the societal fabric and culture, it most definitely presents a justification of the prevailing status quo.

The writer is a freelance columnist. She can be reached at faizafarid37@gmail.com