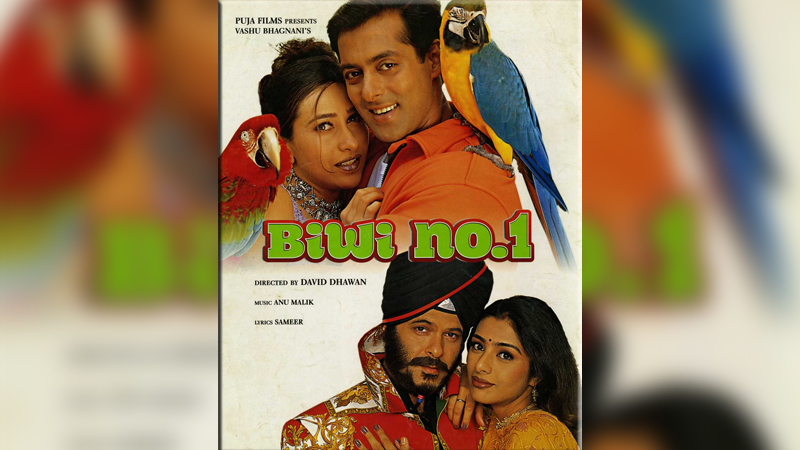 The script and the songs are still afresh. From the title song of the film to the melodious track “Jungle hai adhi raat hai”, hip tracks like “Mehboob Mere”, “Ishq Sona Hai” and “Chunari Chunari” lived on for decades. The typical ’90s catchy beat for the songs in the film kept the tracks on top of the music charts too.

After reprising the role of Salman Khan in the remake of the film ‘Judwaa’, actor Varun Dhawan also steps into the shoes of Govinda for ‘Coolie No.1’. Will the Dhawan team consider remaking ‘Biwi No.1’ and also refresh the hit ’90s songs from the film? We do think “Mehboob Mere” would actually make a great comeback song.

The first quarter of the film shows Salman as a devout, loving husband who adores his wife and children. In a scene from the film, he cancels an important meeting for the sake of his family to confirm his commitment to them over material things. We were quick to fall in love with the character of Salman who plays the role of a rich business tycoon, Prem Mehra.

The film is quite entertaining and comical.

Prem Mehra seems to be in search of a model for an important campaign at work. He instantly falls in love with Sushmita Sen who plays the role of Rupali, and is a model selected for the part. She’s also on a hunt for a rich and well settled man.

Karisma Kapoor, plays the part of Pooja, the wife of Mehra, who eventually finds out about the affair. The story revolves around how Pooja wins her husband back from the grip of his mistress.

The emotional song “Mujhe maaf kerna” for parents is where the tear jerking twist begins. Mehra is now upset about his choice; he realises his mistake and in due course, returns to his wife.

The ‘Biwi No.1’ team is now completing 20 years and we’re celebrating this day with them. Twenty years later, all the actors are in different places. Some are more successful while the other decided to take a back seat.

Salman has many more successful films on his resume. Dragging himself out of the soft, lover boy image, Salman is now mainly famous for his action films. He’s still fond of adding a slight humour element to his films, but the 53-year-old actor is certainly a very different person compared to the ‘Hum Apke Hain Kaun?’ or even ‘Hum Dil De Chukey Sanam’ Salman that we knew. After the success of ‘Dabangg’, the actor signed Sunakshi Sinha again for a sequel and now a part three is on its way. ‘Dabangg 3’ is set to release on December 20, 2019. Salman is also the founder of Being Human which is a charity foundation that provides education and healthcare services for the underprivileged.

Karisma, who was the highest paid actress in the ’90s, was the most active professionally back then. Her 1996 romance blockbuster ‘Raja Hindustani’ marked a significant turning point in her career. The actress won many awards for a number of performances in films. After ‘Fiza’ in 2000 and ‘Zubeda’ in 2001, the actress took a break from her acting career. She did a few films and television shows and a few guest appearances here and there. More recently, Karisma even dubbed films for Kareena Kapoor-Khan’s role ‘Chhaya’ for the action thriller ‘Bodyguard’, which is among the highest grossing Bollywood films of all time, featuring Salman and Kareena Kapoor-Khan in lead roles. Karisma made a comeback as an actress with a leading role in Vikram Bhatt’s supernatural thriller ‘Dangerous Ishq’, co-starring Rajneesh Duggal. Although the film was a major critical and box office failure, the film generated positive reviews for Karisma’s portrayal. In 2013, Karima made a special appearance along with several other actors in the titular song of the anthology film ‘Bombay Talkies’ which was made to honour the Hindi film industry for completing a 100 years .

Since then Karisma has been parenting her children singlehandedly, keeping a low profile away from all the buzz. The actress takes part in a lot of charitable activity and she even supports her close friend Salman’s Being Human Foundation.

Sushmita Sen also went through her own share of highs and lows. Her most famous role in ‘Main Hoon Na’ in 2004 has been the most successful so far. ‘Maine Pyar Kiun Kiya?’, ‘Samay’, ‘Chingari’ and ‘Zindaggi Rocks’ are a few other films she signed up for. The 43-year-old actress was also seen on various shows and charity programmes. She’s a mother of two beautiful daughters.

Anil Kapoor made a drastic transition. The 62 year old actor is ageless as he seems to be getting younger by the minute. Anil’s ‘Slumdog Millionaire’ released in 2008 that became an international hit. The film won a number of international awards including four Golden Globe Awards. In 2010, Anil starred in the eighth season of American TV series ’24’, portraying Omar Hassan, President of the fictional Islamic Republic of Kamistan. The same year, Anil was also cast to play villain in ‘Mission Impossible – Ghost Protocol’ and ‘Power’, a film directed by Rajkumar Santoshi. Anil also worked next to Clive Owen and Orlando Bloom in ‘Cities’. ‘Mr India 2’, the sequel ‘No Entry’, ‘Race 2’ and ‘Shootout at Wadala’ are more projects he chose back to back. Amazon has cast Anil in its pilot ‘The Book of Strange New Things’. He will play the role of Vikram Danesh, the authoritative head of the base on Oasis. There is news of Anil’s upcoming magnum opus collaboration with the biggest stars of Bollywood for the film ‘Takht’. Epic stars Ranveer Singh, Kareena Kapoor, Alia Bhatt, Vicky Kaushal, Bhumi Pednekar and Janhvi Kapoor are cast for pivotal roles in the film which will release in 2020.

We do miss films from the ’90s that were fun and preached a good message altogether. Do you remember the epic ‘Biwi No.1’? Would you love to see a remake of ‘Biwi No.1’ with the same old cast or new some new faces?