The Forty Rules of Love is a mesmerising blend of love, religion and spirituality

* Mainly, the novel consists of five parts — earth, water, wind, fire and the void — which are responsible for the rapid shift in the mood of the story 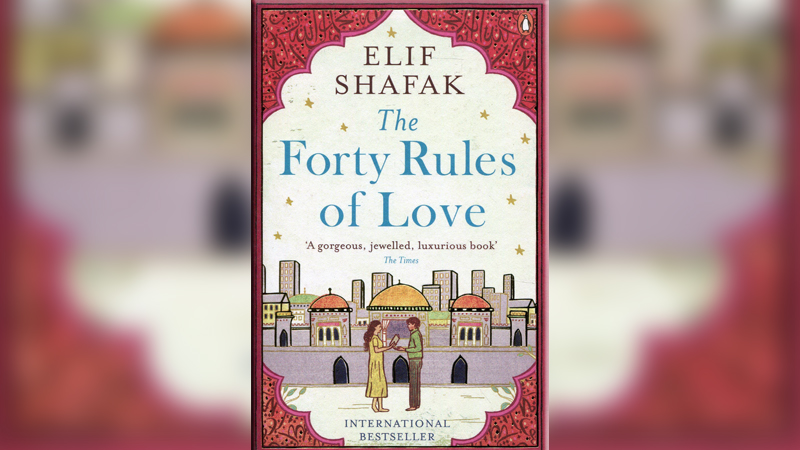 The 40 Rules of Love is a mesmerising blend of love, religion and spirituality that breathes a new air of Sufism into this world with a tarnished image of Islam. Elif Shafak is an award-winning, bilingual British-Turkish author of many artistic novels, political scientist and academician.

She is considered the bravest feminist writer who meshes the eastern and western cultures with her writings with a significant part of women role in society. She interplays with vintage flavors by giving them a tinge of contemporary style. Forty Rules of Love is an international best-seller novel and is regarded as “a gorgeous, jeweled, and luxurious book”. The beauty of the novel is keeping the balance between two different eras. The beginning of novel mirrors the 21st century’s family with a lavish lifestyle and contemporary issues, while it shifts to the turbulent times of the 13th century which reflects the stereotypes of that period, the psychology of people, social conflicts and the concept of Sufism.

Mainly, the novel consists of five parts – earth, water, wind, fire and the void – which are responsible for the rapid shift in the mood of the novel. The Forty Rules of Love is a novel with two parallel narratives flowing side by side like two rivers that fall into the same sea, reflecting the same auras. The first narrative that is responsible for the contemporary shift is about a Jewish housewife named Ella, living an unhappy life in Northampton, Massachusetts. Ella Rubinstein, 40-year-old housewife, and mother of three, works for a literary agency and is given a book named ‘Sweet Blasphemy’ by Aziz Zahra to write a report on. Her husband is unfaithful and despite knowing about his flings, she tries to live like a normal, happy person for the sake of her kids and her husband until one day she writes an email to Aziz Zahra. That one email changed everything for once and for all, just like a dying soul suddenly got a reason to live, Ella then followed the footsteps of her heart, in the pursuit of new adventures of life.

Sweet Blasphemy is another narrative of this book that leads us to the vintage streets of Baghdad, where the artistic imagery allows us to smell the crisp fragrance of musk, mingled with wine and attar (fragrance oils) and linger in the streets with wooden houses, silk curtains swaying with the breeze and the loud voices of fruit sellers echoing in the crowded market.

Sweet Blasphemy is another narrative of this book that leads us to the vintage streets of Baghdad, where the artistic imagery allows us to smell the crisp fragrance of musk, mingled with wine and attar (fragrance oils) and linger in the streets with wooden houses, silk curtains swaying with the breeze and the loud voices of fruit sellers echoing in the crowded market

The narrative Sweet Blasphemy is about a brave wandering dervish, Shams of Tabriz, who is a mystic Sufi who sees on and off visions revealing the scene of his death. He is in search of a companion to whom he can transfer all the flood of knowledge preserved in his chest. He is told by a Sufi that the companion he yearns for is in Baghdad. Therefore, the journey of Shams from Samarkand to Baghdad for a union with Jalaluddin Rumi, a famous scholar of that time, begins. Finally, Shams meets Rumi in Konya in a very intense and dramatic fashion which is beautifully described in the novel as: “I took a step toward the dervish, getting so close I could see the flecks of gold in his black eyes. Suddenly I was overcome with a strange feeling as if I had lived this moment before … I knew I had found my companion. But instead of feeling ecstatic with joy, as I always thought I would be, I was seized by a cold dread” (Shafak, E. 2009, p.157).

On the way to meet Rumi, Shams, in his thirst for finding God, and a companion encounters different people including a beggar of the city, a harlot (prostitute) from the brothel, a drunkard from the tavern (bar) and other characters which reflects the diversity among the humanity, contradiction of the inner and the outer self, and the hidden goodness that is very minute and critical to be seen by bare eyes.

The story starts to unwrap when Shams unites with Rumi as to how they became friends and how everything suddenly changed in the life of Rumi and the people around him. We observe a drastic change in Rumi and how the town turns against him, including the family of Rumi, and how all this combined anger and hate captivated Shams at last, tearing him apart from his mirror; Rumi.

The narrative technique is used throughout the novel, sometimes from the perspective of Shams, sometimes a zealot, sometimes a beggar, sometimes Rumi or Rumi’s family, or the prostitute. This made us understand each and every part of it with a developmental psychology concept, where we get to know which thoughts or circumstances of a person lead him to a particular consequence. But the thing that could have been improved is the addition of Aziz’s narrative. The character of Aziz is a hidden one and deserved more recognition. This leaves a void in the novel, and the audience yearns to know more about him, as in what were his thoughts, what were his feelings, how was his personality, being a Sufi, was different from normal people?

I love the concept of how Shams derived forty rules in accordance with real-life situations, which is quite unique. These rules can easily be related to and followed by in daily life issues. My favourite rule is: “How we see God is a direct reflection of how we see ourselves. If God brings to mind mostly fear and blame, it means there is too much fear and blame welled inside us. If we see God as full of love and compassion, so are we” (Shafak, E. 2009, p.30).

I would definitely recommend you all to read this book for a crisp vintage experience in the wide streets of Baghdad and narrow stony streets of Turkey.

The writer is a blogger, researcher and a volunteer at I Feel charity school. She is a student of English Literature at Air University and can be reached at zarbakhtbilal1996@gmail.com