* Tharparkar is located at a distance of 300km from Karachi 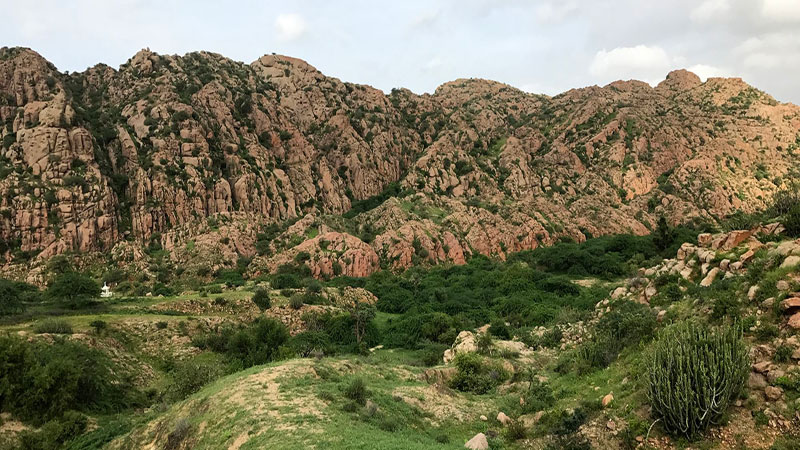 The Tharparkar desert covers an area of 22,000 square kilometres which makes it the 18th largest area of the world. Its population is around 1.6 million residing in 2,400 villages and the district’s literacy rate is 18.36 percent. A total of 5,229 government schools are obsolete in the province and 798 of them are situated in Tharparkar. Mithi is the central town in the district, where the Civil Hospital is located. The hospital is in a dilapidated condition.

Tharparkar is located at a distance of 300km from Karachi. A large number of Hindus reside in the area.

There are 574,333 registered voters, of which 254,522 are women. According to the Election Commission of Pakistan, over 180,000 women have not been registered and are termed as ‘missing voters’.

The district also has a substantial Hindu community, which makes up approximately half of the entire votes.

The region is combating an extremely scarcity of drinking and irrigation water. People fetch saline water from hand pumps and deep wells. In some areas, people have made synthetic tarns where they collect rainwater and every so often water of the ponds is too impure to utilise.

It is challenging to visualize a life poorer than that of the people of Sindh’s Tharparkar desert region. They live in horrible scarceness, uninterrupted starvation and do not have rudimentary provisions.

Krishna Kumari Kohli AKA Kishoo Bai is a Thari representative for the people of Thar. Senator Kumari is a member of Sindh’s Hindu community based in Thar. She is from family of freedom fighter Rooplo Kolhi. However, she has not played his role to overcome the issues of Thari people as she represents herself as first Thari lady at senate.

Sindh government and representatives of government has always done the job of announcements and proclamations for Thar. Sindh government is still looking here and there to declare mega packages but implementation of declaration for Thar is always a big question mark. As recently, to overwhelm the ongoing scarcity in district Tharparkar, the Sindh government has publicised endowment of Rs 250 million for ration and feed stuff dispersal among the livestock owners to endure during the inflexible time. Even CM ordered measures to accelerate involvements and help affluence complaints of the sufferers yet no any implementation has been founded there. As many as 300 children died of malnutrition this year in Tharparkar, said the health department.

Over 1300 peacocks have died in Thar in last six months and death rate is still on accelerator. According to a recent report, more than 100Tharis committed suicide in the last 10 months. Poverty is tallying to people’s obstruction. Animal corpses are a familiar view on the roads of Tharparkar. It is highly deplorable that even though the same political party has been at the helm in Sindh for a long time, Thar was never part of its primacies.

Mortality is touching the peak and responsible authorities are in a deep sleep at king’s throne. Thar is looking for the sustainability of lives of children, women and elders. Basic infrastructure is vanished from the whole two thousands four hundred villages, even four ministers representing the Thar in Sindh government cabinet.

This largest area where water is unique to drink, food to eat and shelter to live as these are basic needs of a human according to the Constitution of Pakistan and State has to fulfil the basic needs of its people. In this exceptional backward region of Pakistan, there is no any university or well reputed academic institute.

Recently, killings and murders along with suicide committing are also increased, which ultimately depicts the helpless and hopeless sever situation of Thar zone. This murders’ series is witnessed the jungle law is in practice there at Thar. Feudal and traditional moguls system has ruined the fertile desert of Pakistan. Prime Minister Imran khan must take serious notice to make Thar a modern and advance region of Pakistan by providing all important infrastructure and fulfilment of basic needs for the standard livelihood.

However, the absence of qualified teachers and insufficient infrastructure, it is inconsequential. Lack of basic health facilities, absence of clean drinking water along with shortage of food to eat and deficiency of shelters adds troubles in lives of people of Thar. Thus, the government should take serious measures as it is a life-threatening problem and must be addressed on priority basis.