* After three years of marriage, things start getting harder between Umar and Sana 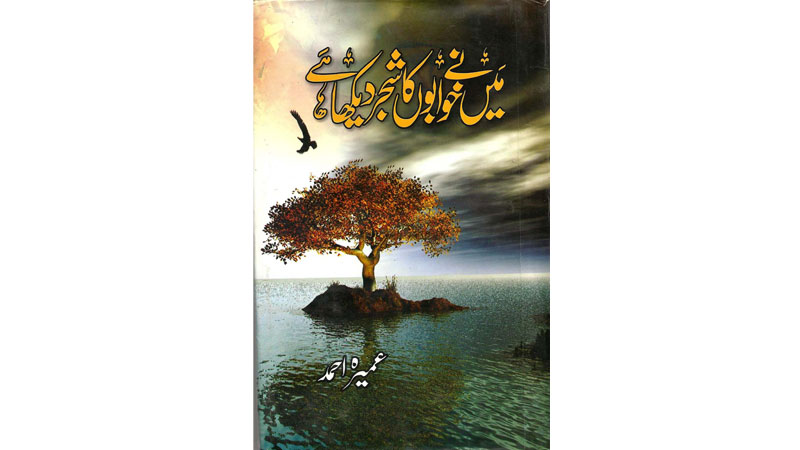 Mene Khwabon Ka Shajar Dekha Hai is an Urdu novel written by Umera Ahmed who is one of the optimal Pakistani writers.

The book gives lesson to every individual who deems that everything in love is fair, even committing evil deeds by wrecking lives or separating two hearts. The story is about a girl Shumaila who falls deeply in love with her cousin Umar and daydreams about him all the time. However, he love is not reciprocated. Umar is already in love with his class fellow Sana who is a cute, innocent and a helpful girl. He wants to marry Sana. Umar’s mother is against him marrying Sana as she wants Shumaila to be her daughter-in-law. However, accepting defeat from Umar, his mother finally gives in and lets him marry Sana. Shumaila is heartbroken.

After three years of marriage, things start getting harder between Umar and Sana. She, without further ado, started planning bad things for vanishing their relation by getting the support of Umer’s mother who agreed for his marriage but not accepted Sana as her daughter in law wholeheartedly.

Shumaila is successful in creating misunderstandings between Umar and Sana, and finally gets him to divorce Sana and marry her instead. She’s elated to be his wife but the love Umar still has for Sana bothers Shumaila. She tries her best to win his love but can’t. One day Shamaila got afraid. If the same manner Umer just attempted to fulfill all her materialistic wishes by giving her no authority to be the princess of his heart, she might not get the opportunity to feel the same feelings of love from her husband as she had.

Time passed, unfortunately, the behaviour of Umer was not changed. He neither talked to her in a well way nor got her the affection as the right of every wife. Shamaila even became the mother of his two daughters yet there was found no love in Umer’s eyes and heart for his second wife nor she was given the due respect because in every breath of his life just Sana’s name was written. He saw the brightness of sun just for Sana and loved the darkness of night only for her. His world revolved around his first wife whose smile made him happy in sadness. He laughed in all troubles of life when he was with Sana. His love for her was undying and it was the same love that gathered Sana and Umer once again by revealing the secret of Shamaila’s hatred and plan that she made to separate two real lovers (the owner of two bodies but one soul) just to get place in the life of the person she loved.

Shumaila is successful in creating misunderstandings between Umar and Sana, and finally gets him to divorce Sana and marry her instead. She’s elated to be his wife but the love Umar still has for Sana bothers Shumaila. She tries her best to win his love but can’t

Moreover, Shamaila got failed to bear Sana once more in Umer’s life and decided to leave the person who had no emotions of love for her. It was the rigorous day for her, the day she came to know that all these events occurred because of her vain passions which she kept to bring peace in her life by giving pains to an honest loving woman like Sana. Finally, she lost the battle of winning the heart of a person she considered everything and decided to leave and finish this relation which was brought into existence just because of Shamaila’s selfish acts.

Hence, the story was so beautiful as it taught that love never demands selfishness. All it wants is sacrifices, belief, honesty and being happy in the happiness of beloveds. If we love someone so we are required to get glad in their gladness that is what makes our lives beautiful. Snatching the love of someone and demolishing their lives for the only reason that we love him or her is just the sign of weak emotions. Being together is not the real love but feeling merry in the gladness of that person who we actually love is called true love.

Being a huge fan of Umera Ahmad and having read many of her books, I suggest every bookworm to read at least one of her books as they teach the realities of life especially tips on how to save your relationships, how to live a fulfilled life and ways to combat evil eyes.

The writer is a student of political science