As President Xi Jinping wraps up his week-long tour of Europe, his first overseas visit of the year, he seems to have left a growing sense of unease amidst both EU and US policymakers with regards to their pre-existing stance on China. While the US is still locked in an increasingly complex trade row with China, the EU just prior to President Xi Jinping’s meeting with itstop leaders had designated China as a strategic rival. This was underlined particularly by French President Emmanuel Macron who while lauding Europe’s re-awakening to changing global dynamics called for a united re-assessment of the EU’s stance on China, which in effect is alsoits biggest trade partner.

However, President Macron’s calls for a united stance on China were brought into question during President Xi Jinping’s stop-over in Rome, where despite warnings from the US, Italyofficially joined China’s Belt & Road Initiative (BRI) as the first G7 country to do so. During the visit both countries signed 29 agreements amounting to about $31.8 billion, spanning Italy’s energy, ship-building and maritime transport sectors. With a particular emphasis on enhancing maritime trade links, these agreements also included two port management deals for the Ports of Trieste (at the Northern opening of the Adriatic Sea) and Genoa (Italy’s largest Shipping port). As part of the BRI’s 21st Century Maritime Silk Road, both these ports add to the increasingly growing network of ports around the Mediterranean region where Chinese companies now own a major stake. These includefor instance the Greek port of Piraeus, the Port of Istanbul in Turkey and Port Said in Egypt all of which serve as key transit points for shipping lines through the vital Suez canal as well as the Black Sea region. 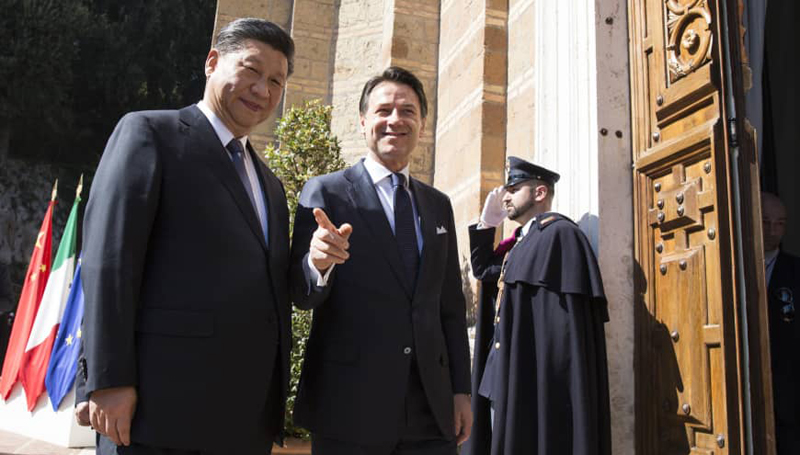 These same ports also form vital nodes within the overall Belt and Road Initiative which has been repeatedly played down by the US as being nothing more than a ‘Vanity Project’.However, the fact that Italy was under pressure from both the US and the EU to not provide such inroads to Chinese State Owned Enterprises over fears of debt and the loss of sovereignty bear witness to a much larger issue. As one of the founding members of the EU and as the third largest Eurozone economy, Italy’s decision to thus officially become a part of the BRI stands in somewhat muted contrast to the show of unity by French President Emmanuel Macron, German Chancellor Angela Merkel, and EU Commission Chief Jean Claude Juncker all of whom met President Xi Jinping at a joint meeting held in Paris.

As President Xi Jinping wraps up his week-long tour of Europe, his first overseas visit of the year, he seems to have left a growing sense of unease amidst both EU and US policymakers with regards to their pre-existing stance on China. While the US is still locked in an increasingly complex trade row with China, the EU just prior to President Xi Jinping’s meeting with itstop leaders had designated China as a strategic rival

It was also at this meeting where the EU Commission President in representing a united front clarified its labeling of China as a Strategic Rival, terming the label as a compliment as opposed to a threat. Asimilar stance was also taken byChancellor Merkel who went ahead and stated that many countries in the EU were still open to joiningthe Belt and Road Initiative. These statements which were made in Paris on Tuesday represented a softening of the rhetoric employed by these same leaders the previous Friday, where Mr. Juncker termed China as a competitor, partner and rival after a summit with EU leaders heldin Brussels.

Hence, while there is little doubt at the moment over the extent to which China has the EU’s combined attention, the prevailing uncertainty and fears of disunity amongst EU Countries is currently on fulldisplay with regard to their policy on China. This prevailing uncertainty is further exacerbated by the ongoing Brexit crisis, as well as the US’s withdrawal from itsrole as a global leader based on its ‘America First’ policy. Therefore,while China’s far-reaching influence as a major investor and trade partner is undeniable, what’s highly of interest is the fact that China is able to use this influence to challenge not only the very unity ofthe EU butthe entire concept of the’West’as a homogenous bloc.

Specifically within the context of the ongoing US-China trade war, and its related disputes over intellectual property rights and the standardization of next generation systems (such as the deployment of a standardized 5G telecommunications network), President Xi Jinping’s Europe visit has made it clear that going forward, European leaders may have to carefully balance their relations between an uncertain US to the West and a rising China in theEast. What’s more, these broad rangingeffects of china’s rise as a geo-economic power, onto long-held geo-strategic fault lines are based on the hard realities of trade, investment and a rapidly changing international financial system. These in conjunction with China’s emphasis of securing its long-term growth objectives are directly aimed at redefining the thresholds between the world’s developed and under-developed economies. By tying its own long-term growth to a broad based approach to global economic growth, China’s vision and bid for a more prominent role as a global leader is currently on full display across Europe.

The writer is a Senior Research Associate at the Strategic Vision Institute, a non-partisan think tank based out of Islamabad