‘Delhi Crime’ wins because of the tone it chooses

* Based on the 2012 Delhi gang rape case, the Netflix series adopts an approach that is unabashedly tough, avoiding dramatic flourishes 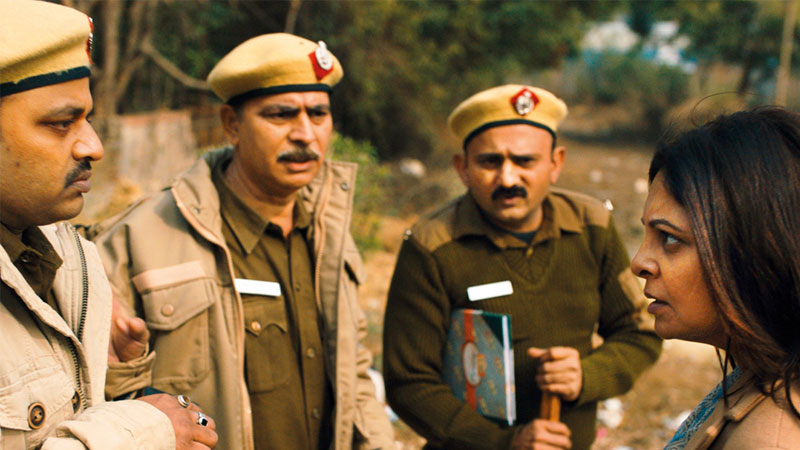 Early Monday morning, I woke up with a fair idea that it would not be easy to watch Richie Mehta’s seven-episode series ‘Delhi Crime’, but I never expected that it would shock me in unexpected ways and allow me to empathise with my father who served Sindh police for over 35 years of his life.

Delhi Crime’s procedural setting, with a lugubrious backdrop of the Indian capital, ringing melancholy, clutches you mainly because of its languorous pacing and the way it humanises a profession that is mostly misunderstood and looked down upon.

Based on the 2012 Delhi gang rape case, the Netflix series adopts an approach, that is unabashedly tough, avoiding dramatic flourishes. To do this, Mehta uses an unassuming approach, where he presents to us the crime scene within the first few minutes of the introductory episode; right after, we are immediately transported to a police constable’s – the one who was first called to rescue the victims – house early morning of the day this heinous act took place, where his wife is incessantly coughing.

He seems perturbed by his wife’s aggravating condition. Willing to help her, he offers to bring another medicine on return, not knowing that it would take him more than usual time to see his wife again.

Slowly, we are introduced to all police officials who will be involved in this investigation, including Deputy Commissioner Vartika Chaturvedi, Bhupendra Singh, Sudhir Kumar and Neeti.

Singh is struggling to find a match for his 21-year-old daughter, while Neeti is not sure if she really wants to continue a relationship with her prospective match, who is also serving the Indian forces.

Mehta uses the first episode to mount a taut atmosphere that prepares us to assimilate what is to come. Not only this, he also clarifies that the people who will be involved in this case’s unravelling are normal human beings – not super cops like the ones that we have often seen in familiar Bollywood fairs like Simmba, Dabangg, or Singham.

Therefore, as we see a police constable struggling to get medicine for his ailing wife, an official of the force knocking people’s doors to find a perfect groom for his daughter, a police deputy commissioner trying to convince her daughter to turn down an offer to study in Toronto, and a trainee taken aback by her parents’ interference in her life even when she apparently moved to New Delhi to experience independence, we know that these are flesh and blood humans. Humans like us, who are vulnerable and as likely to be affected by an act of monstrosity as us – the ‘normal’ beings.

Slowly, we are introduced to all those police officials who will be involved in this investigation, including Deputy Commissioner Vartika Chaturvedi, Bhupendra Singh, Sudhir Kumar and Neeti

This is why when Ram Pratap (Asif Ali Khan), the head constable, finds two survivors lying on a sideway, we see that he is absolutely gutted. It takes him some time to process that this is ‘real’ and wrap the two in a white bed sheet to take them to a nearby hospital. His composed posture, controlled speech, and minimal expressions make the aura more alarming.

Pratap, astutely played Khan, is, in this scene, more effective than any flamboyant police officer that you may have seen in Hindi films before.

His restrained gait is the winner here, managing to make the complexity of his emotional turmoil even more palpable. And towards the end of the show, when he finally reaches home, it feels cathartic and sentimental, without an ounce of dramatization, reminding me of my father who, sometimes, used to visit home after two weeks, and that too at a time, when I was probably asleep, or in school – or tuition classes.

Mehta, through this approach, seeps us into the lives of these ordinary police personnel.

As the narrative’s mood is built upon perceptive layers of empathy, the minute details of the barbaric act are revealed. But, the writer and director chooses to leave a lot to our imagination.

He compellingly captures Dipika (Abhilasha Singh), the victim, and Akash’s (Sanjay Bishnoi), the victim’s friend who was also injured, journey from the mall to the bus stand.

As they approach a rickshaw driver to take them to Dwarka, he refuses and instead offers to drop them at the Munirka stand, where, he suggested that they would easily find a bus to Dwarka.

At this moment, we know what is to come. We are aware of the horror awaiting them. But the feeling of fright is amplified, as we hear Lata Magneshkar, in her quivering voice, crooning Yeh Samaa, Samma Hai Yeh Pyar Ka. This was haunting. And I never expected a liltingly rhythmic love ballad like this to even briefly terrify me in this way.

What happens when they enter the bus from the Munirka stand is left to viewers’ interpretation.

This is even a more brutal device: the writer instead of recreating a dark picture of the past leaves it to the audience to think what happened within the confines of that bus on that fateful night.

And then, when we see DCP Chaturvedi delving into the deep end of this interrogation, it becomes clear where Mehta, as a writer and director, stands. Chaturvedi wants to understand the suspects. Even when the first suspect makes a confession, the heightening rage in her brews to an extent that she almost explodes. But she has to control her fury. For in this system: capturing all suspects alive is success, while anything else is failure.

Chaturvedi’s role is one that can be easily misinterpreted and one can be loud, obtrusive and overly noticeable. Shefali Shah, who plays this role, and a chameleon of an actor, proves that it is very rare for her to hit the wrong note.

Her empathetic gaze, her measured mannerisms, and her exact dialogue delivery show her calibrated command over the craft. Also, it is interesting to note that all the key players working with Shah’s Chaturvedi are women: the surgeon who operates Dipika, the journalist who closely collaborates with Chaturvedi, the trainee who shadows Dipika’s parents when they are almost at the brink, and the magistrate who records the victim’s detailed statement when the time is right.

This is the coming together of a powerful force to rediscover its own might. And in this process, we see them exploring their own humanistic facet and bringing about a much needed change.

So when the perpetrators of this abhorrent act are brought together, we see the interrogation team taking a sigh of relief, but there is no closure. In fact, there can be no closure because it is not a one-time thing. Still, Delhi Crime hints at better times through imagery that cuts deep. The Indian capital’s impenetrable, abstruse streets create an atmosphere that reigns the screen throughout its running time, like one of its central characters. Without any dialogue. It never speaks but its visual power is both haunting and riveting.

Mehta’s crime drama is, at its best, unremarkable. Because it chooses to be so. And life is like that. Police chases are not dramatic. They do not allow officers to engage in fanciful chest beating, because these are the people who have not, even briefly, slept for long hours – and sometimes, days. And, in this process, they lose their loved ones. Their relationships are dented and strained, forever.

‘Delhi Crime’ is an Indian drama anthology series written and directed by Richie Mehta. Starring Shefali Shah, Rasika Dugal, Adil Hussain and Rajesh Tailang, the series is set in the aftermath of the 2012 Delhi gang rape.

Its first two episodes were premiered at the 2019 Sundance Film Festival in the Indie Episodic category.

The writer can be reached at adnan.murad@live.com