‘Made in Heaven’ — an uncanny resemblance of life in Karachi

* 'Made in Heaven' masterfully weaves together intertwining narratives 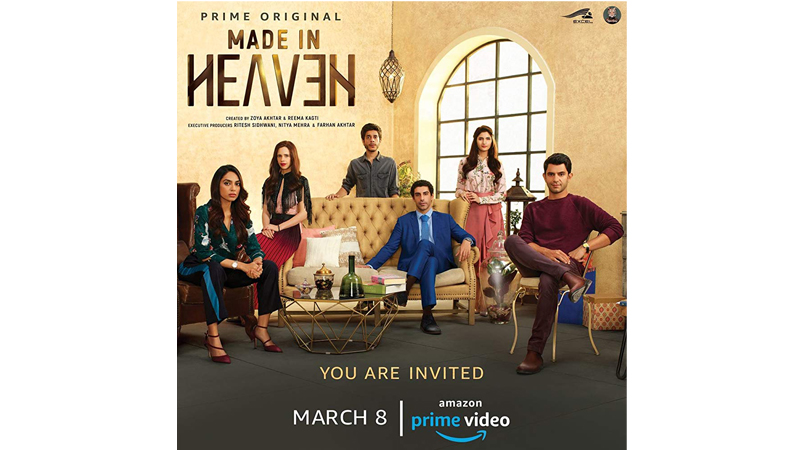 We are all scarred in some ways, carrying baggage that almost affects our gait, our posture and our mannerisms and also, the way we deal with people. And it is not just stress or workload. It’s something bigger than that. Something accumulated over years of silence, imbued with trauma, and charged with wretched melancholy. Bringing such flawed characters to screen and making them even more vulnerable without ever gnawing at their frailties is something that we do not experience too often, especially in South Asia.

This is why Zoya Akhtar and Reema Kagti’s ‘Made in Heaven’ has stayed with me even after a long time. Each character arc drawn by Zoya Akhtar, Reema Kagti and their co-writer Alankrita Shrivastava is laced with haunting melancholia, never coming across as orchestrated. But their pain is finely calibrated to match the mature sensibilities of evolving audiences. The writers create a lingering loop of longing around these humans who are flesh and blood – burning with aspirations, finding their true selves in a world full of people, wearing masks and masquerading as refined versions of themselves.

Masterfully, ‘Made in Heaven’ weaves the intertwining narratives of its main players – Tara Khanna, Karan Mehra, Adil Khanna, Faiza Naqvi, Jaspreet Kaur, Kabir Basrai, Ramesh Gupta and Nawab Khan – around the backdrop of roughly 10 marriages, each one making a distinct, subtle statement on archaic – or in some cases, modern, yet superficial – traditions of our society.

The aforementioned characters are all astutely etched and can stand on their own. But there are three that will refuse to leave you: Tara Khanna, Karan Mehra and young Nawab Khan.

Kinjawadekar’s depiction of blossoming romance at an early age is both bewitching and heart-breaking. He is a person who most people will never talk about. But the aura of believability that he creates around himself is awe-inspiring. In one of his first prominent scenes, we see him sliding a love note in his beloved’s pocket. A scene of defiance and immense courage; in addition, it is shot with such brevity that you almost enter that frame, living in that moment, not willing to leave without fully relishing the vim and vigour of these innocuous souls. The intensity – and audacity – on display by a young actor like Kinjawadekar in this scene makes the depiction of young Khan even more strikingly unusual. And this is why when we see a seasoned actor like Massey, appearing on screen as grown up Khan, the emotional gravitas is perfectly under control, put on a slow simmer to let the bubbles of a diffused relationship hit the surface once again and bring the sentiments buried in the subconscious to the forefront.

Kinjawadekar’s depiction of blossoming romance at an early age is both bewitching and heart-breaking. He is a person who most people will never talk about. But the aura of believability that he creates around himself is awe-inspiring

We see Kinjawadekar and Massey complementing each other so well that it is hard to believe; they are immaculately synchronised to bring this layered examination of a past link-up to a consummate boil.

It’s rather bizarre that I chose to start my exposition with the character of Khan, who roughly has five to six scenes in a nine-episode series. But such is the sobriety of his personage.

At this point, it is significant to note Mathur’s Mehra is the show’s lead, alongside Dhulipala. And Khan is Mathur’s childhood friend.

Mehra and Khanna are entrepreneurs and run a business under the name of ‘Made in Heaven’ that organises weddings. While they go about their daily business rituals, we see the sordid, grim narratives of their lives unfurling simultaneously, making the series even more flavourful as they juggle the sinuous paths of their brutal – but on the surface, quite handsome – lives.

They are best friends.

The portrayal of their bond is ambiguous and subtle at the same time. Teetering on the cusp. You do not know how their relationship will unspool. Or what will happen to their affinity at the end of the ninth episode? Hence, as you decide to watch this knockout, crackling interplay between two characters, you end up revelling in a state of constant perplexity, flowing along in the stream of traumatic past that they have dived into.

This is, therefore, the best series to come out of India, setting a masterly criterion that will be difficult to beat for its successors.

‘Made in Heaven’ is also an achievement because it gives us an imperfect, incomplete woman as its lead in the face of Khanna, whose closet is filled with more skeletons of her vernacular past than the branded clothes and accessories that she dons to mask her true identity.

That’s why the process of realisation hits you right in the gut. Just where you would not expect it to.

You will love her, empathise with her, sulk over her losses and think about her even days after you will have watched this impeccable work of stringed, jarring emotions at play.

And it is not just her. Both Khanna and Mehra’s dichotomous representation of irony, despite moral incongruities, is musical. Fully harmonious and melodious.

These are two actors who live in the roles they promise to deliver and remain faithful to the representation of Khanna and Mehra.

Also, Mehra’s sexual orientation is never exploited to arouse sympathy, which is the stereotypical way of gaining attention for queer characters in South Asian context. Rather, his identity is normalised in a way that is congruous with this series’ exquisitely furnished writing, interspersed with metaphors on love and loss, and lyrical imagery that allows us to wholly soak into the nanoscopic narrative details.

And it’s not just Mehra and Khanna who are humanised; the writers allow Kalki Koechlin’s Faiza Naqvi and Jim Sarbh’s Adil to go and live in the souls of their characters, making their portrayals razor sharp by completely immersing in the tender sadness of the Indian capital – an image of urban existentialism at its best.

Their work makes you feel for them. Sense the sentiment of being trapped in the lonely pockets of a sullen, sunless city, characterised by haunting clouds of gloom and tenebrosity.

Living in Karachi is not entirely different either. The despondent territories of this city – and the feeling of always being surrounded by people who will never remove their pompous veils – are just as excruciating as the ones in New Delhi. But the message that we derive from ‘Made in Heaven’ is difficult to assimilate; nevertheless, it is one that can change the way we view other humans: that people – odd and strange, conflicting and dissonant – have their own truths, which they are trying to hide in this increasingly cacophonous city. Developing a barbed, rancorous viewpoint about them will benefit no one.

Sometimes, it is just enough to venerate an individual’s personal space without an ounce of judgemental gaze. Because we are all different in our own way: peculiar, wild, eccentric and flawed. Certainly, we are all ‘Made in Heaven’.

‘Made In Heaven’ is a 2019 Indian drama web television series that premiered on Amazon Video on March 8, 2019.

Akhtar and Kagti created the show and they wrote it with Alankrita Shrivastava. Akhtar, Shrivastava, Nitya Mehra and Prashant Nair served as directors for the nine-episode series.