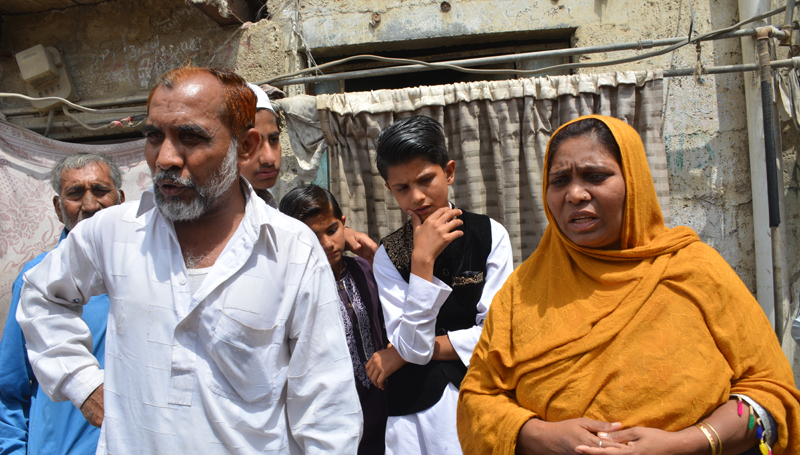 Most of the metropolitan city remains silent on Sunday mornings as people prefer to sleep till late on weekend. Despite the lazy Sunday morning, the atmosphere was full of life in Gareebabad colony–divided by railway track and full of narrow strips of single and double-storey houses running parallel to the track.

Rickshaw drivers were making weekly maintenance of their rickshaws in front of their houses.

Women were feeding their goats standing under the banyan tree.

Elderly people sitting on wooden benches watched as young children played. Teenagers shouted at their opponents, playing cricket between the railway tracks; pausing when they heard the train whistle and restarting after it passed. Young children roared with joy while playing with marbles as young girls giggled, murmuring jokes with each other.

Despite the life and jubilation reflected in all these scenes, fear reflected from the eyes of Zulikha Bibi and her husband, Rafiq Ahmed. “We are afraid that these scenes full of life will not more continued, as we were given 7-day notice of eviction by Pakistan Railways that they want to build Karachi Circle Railways (KCR) for which they will demolish our houses where my three generations lived,” said Ahmed.

He said that due to the price hike, lack of job opportunities, locals were already struggling hard to meet both ends and if evicted, they could not afford to build new houses or rent new places.

Ahmed lives with his wife and two sons and two daughters in Gareebabad. The colony, which literally means poor men’s colony, when translated, is located merely few yards away from Sindh’s Chief Minister House and comprises of 237 households with a population between 3000 to 3500.

“My father moved here long ago, I was born here,” added 57-year-old Ahmed.

Bibi said that she was born in this colony and now she was a grandmother. The government authorities wanted them to evict the houses where they had lived for decades.

“If the government really need this place, there must provide us with alternate shelter,” she demanded.

Sindh High Court Advocate, M Ali Shah, is helping families of this colony on all legal matters. He said that in the initial stage, around 70 houses out of the total 237 were served eviction notices.

He added, “In this project around 4653 houses would be demolished as surveyed by government departments, but despite that government has not announced any policy on how these families would be given alternates.”

Shah said that families were very afraid while students were unable to continue their studies and focus on annual examinations because of tension. “We are ready to cooperate with the government if they need this land for any development purpose, but at the same time, the government must announce any alternate for these families,” said Shah.

Ahmed remarked that residents of the colony were not only afraid but also very angry.

“We would prefer to die rather than evicting our homes,” he added.

Another elderly resident of the colony, Haji Saleem, expressed his anger at being called an encroacher by government authorities.

“An encroacher comes, grab land illegally, sale and leave, but we are here for past many decades, how can allege us, encroacher,” said Saleem.

Locals were said to be ready to cooperate with the government authorities in the development project. Yet, at the same time, they demanded the government to provide them with alternate housing, where they may live peacefully.