* More than 300 confirmed dead, hundreds of thousands still at risk 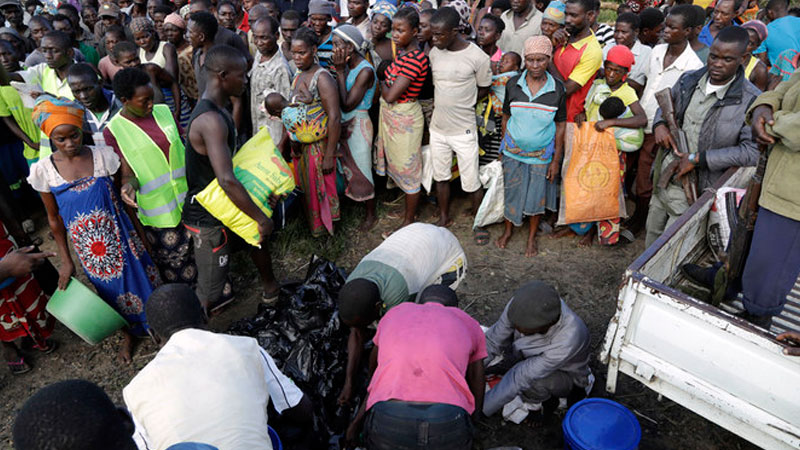 Five days after tropical cyclone Idai cut a swathe through Mozambique, Zimbabwe and Malawi, the confirmed death toll stood at more than 300 and hundreds of thousands of lives were at risk, officials said.

Mozambique, where the monster storm made landfall early last Friday, is reeling.

“We’ve thousands of people … in roofs and trees waiting for rescue,” Caroline Haga, spokeswoman for the International Federation of Red Cross and Red Crescent Societies, said.

“We are running out of time. People have been waiting for rescue for more than three days now,” she told AFP in the storm-ravaged coastal city of Beira.

She added: “Unfortunately, we can’t pick up all the people, so our priority are children, pregnant women, injured people.”

Survivor Aunicia Jose, 24, speaking in the district of Buzi near Beira, said, “The situation is very bad, we haven’t eaten since Thursday, until today.

World Food Programme (WFP) spokeswoman Deborah Nguyen told AFP in Beira that “the priority today is to rush to rescue people trapped in the flooded areas” as much as organizing temporary shelter for those rescued.

“The situation has not really improved. In Buzi, the villages are still under water but the good news is that there are many rescue teams working all day long.

“Relief operations are progressing, but there is still a lot of work.”

The UN said it was “one of the worst natural disasters in southern Africa,” and launched an international appeal for relief funds, having earlier said it was aiming to help some 600,000 people in coming weeks.

“We do not yet know enough about the level of destruction to give an accurate estimate of the amount of this call for funds, but it will be important,” spokesman Farhan Haq told reporters at UN headquarters in New York.

Mozambican President Filipe Nyusi said on Tuesday that 202 people had died, according to the latest toll, and nearly 350,000 people were at risk.

In Zimbabwe, the death toll stood at 100 on Wednesday but was expected to surge to 300, while up to 15,000 people are estimated to have been hit by the storm.

In Malawi, nearly a million people have been affected and more than 80,000 forced from their homes, according to the UN.

Aid agencies said they were prepared for the cyclone which made landfall early Friday, but not for the massive floods that followed.

Mozambique bore the brunt from rivers that flow downstream from its neighbors.

Beira airport which was partially damaged by the storm and temporarily shut, had re-opened to become the relief operations hub but is proving not large enough.

Air force personnel from Mozambique and South Africa have been drafted in to fly rescue missions and distribute aid which can only be airlifted as roads out of Beira have been destroyed.

A government worker who asked not be identified spoke from a roadside after he was rescued by boat in Nhamatanda, some 60 kilometers (40 miles) northwest of Beira, saying “this is the first time our generation has seen something like this.”

Climate expert John Mutter, a professor at the Earth Institute at New York’s Columbia University, said the heavy toll was partly explained by the infrequency of such weather events in southern Africa.

“Mozambique and Zimbabwe are essentially unprepared. They both have weak governance that, honestly, focuses on many more pressing things (as they would see it). And because cyclones are so rare in this part of the world, so preparedness is minimal,” Mutter told AFP.

In Zimbabwe, at least 217 people are listed as missing in Chimanimani in Manicaland, an eastern province which borders Mozambique.

The district remains cut off after roads were swallowed by massive sinkholes and bridges were ripped to pieces by flash floods — a landscape that Defense Minister Perrance Shiri said “resembles the aftermath of a full-scale war.”

Families were using hoes to dig through mounds of soil in search of their missing relatives, an AFP correspondent saw.

After visiting some of the victims in Chimanimani, Zimbabwean President Emmerson Mnangagwa said “a tragedy has visited us.”

“The last place we visited, where three main rivers merge, an entire village was washed away. I think those are the bodies which are now being found in Mozambique,” he said. The three countries are some of the poorest in the region and depend heavily on foreign aid. In Rome, Pope Francis expressed “my pain and my closeness” for those caught up in the disaster. “I entrust the many victims and their families to the mercy of God and I implore comfort and support for those affected by this calamity,” he said, addressing thousands of pilgrims in St. Peter’s Square.