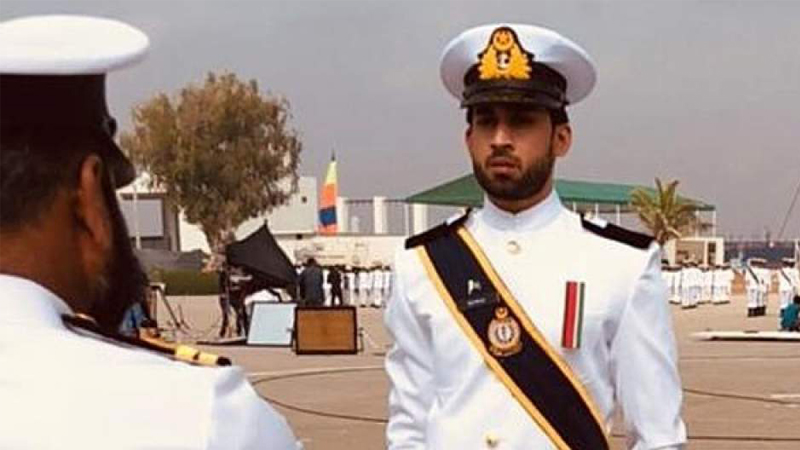 Bilal Abbas Khan seems to once again become talk of the town stealing all the spotlight so far this year with so many different onscreen characters and epic performances in each.

We have seen him transform from a helpless man to a beast in ‘Balaa’ and we’ve seen him play a mysterious character in ‘Cheekh’. Frankly, with his acting calibre seen in ‘Cheekh’, we thought we’ve seen the best of him but with the release of ‘Laal’ teaser, Bilal Abbas Khan has proven that there’s a lot more to see and a lot more to appreciate about him.

So what is Bilal doing in ‘Laal’?

‘Laal’ is a telefilm that pays tribute to Pakistan’s Navy and Bilal is playing the role of a Navy officer in it. The teaser of ‘Laal’ shows a fisherman and his wife with two boys – Yousaf and Behram. Yousaf is his father’s favourite while the other struggles for affection.

Young Behram grows up to be the character of Bilal, a navy officer who’s willing to risk it all for his country even if it means his own life.

Bilal is definitely one of a kind actor who chooses very different roles that give him a challenge to work with. Choosing the character of Behram had a different emotion for Bilal as he felt proud doing this character which can show his love and affection for those who serve the country with their lives.

To play a character that makes him proud and excited at the same time is the reason we see him play Behram effortlessly and this is also the reason why everyone is looking forward to watching it.

Bilal has the whole Internet going crazy about him.

Since the release of ‘Laal’ teaser, fans have hit the Internet to express their thoughts. For many, the only reason they’ll be watching ‘Laal’ is because Bilal’s in it and I can’t agree more to it.