Capitalism is not ‘under threat’

The former governor of India’s central bank and renowned financial wizard, Raghuram Rajan, issued a grim warning on BBC Radio 4 in mid-March that capitalism was “under serious threat” as it had “stopped providing for the many. “The “many,” in turn, would “revolt against capitalism” if the status quo remained unchanged. And as history testifies, revolutions are rarely bloodless.

His premise is bewildering as it conflates capitalism, a system of organising the economy, with the duties of a state. Revolutions are routinely the product of poor governance and absent accountability, and not per se the pursuit of profit.Otherwise, the long-defunct Soviet Union would today be the beacon of socio-economic equality.

In their fascinating book “Why Nations Fail,'”authors James Robinson and Daron Acemoglu assert institutional capacity and inclusiveness create the social freedom necessary for entrepreneurs, the backbone of any economy, to flourish. Capitalism,hence,is a tool the state wields to further its socio-economic agenda.

This is not to suggest that economic imperialism using the levers of capitalism, as the US often stands accused of, does not exist. Or that capitalism has not created a culture of mass consumerism through advertising and entertainment that racks up huge debts in increasingly credit-based economies. 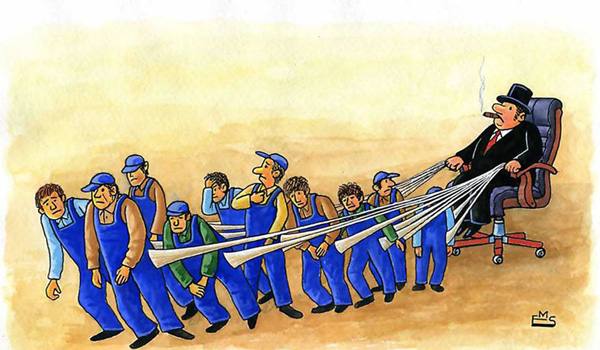 Yet capitalism, contrary to what Rajan believes,has never feigned altruism. There is no evidence to prove such, barring perhaps the nanny statemodel in Scandinavia that can only work with small populations and high racial homogeneity. Also, heavy government involvement in the private sector akin to Scandinavia is utterly antithetical to textbook capitalism.

Capitalistic societies steered by democratic forces to a great degree defuse the potential of revolt since the inherent process of coalition-building makes it harder to cleanly separate the “us” from “them.”

That America’s “Occupy Wall Street” movement and its obsession with the “one percent”petered out over time proves it is simply impossible to find that one flammable “let them eat cake” moment in modern democracies that escalates simmering discontent into broads ocial upheaval.

If the so-called “liberal order”underpinning capitalistic societies is threatened, the blame lies with governments mired in corruption and cronyism that have focused their energies on feeding the propaganda machine instead of strengthening national institutions.Or have spent far beyond their means on specific electorates.

Take Nigeria, for example, the only member of the Organisation of Petroleum Exporting Countries (OPEC)that today imports most of its domestic-use gasoline thanks to endemic corruption that stretches all the way to the top of the political food chain. Ailing refineries, oil theft at an “industrial scale” and long-standing fuel subsidies by populist rulers have magnified Nigeria’s woes.

Or take Venezuela, where the quasi-socialist regime long maintained a transactional relationship with working-class citizens in the shape of extravagant hand outs while ignoring a ballooning fiscal deficit. Today, the cash-strapped government faces mass protests for failing to provide basic public goods and services like food, medicine and electricity.

To associate capitalism with equality is folly. In fact, when reduced to a catch phrase, it is the “freedom to fail.” Individuals and organisations take risks that either produce dividends or don’t. Some win and some lose. You innovate or perish.

Perhaps Rajan meant to say “globalism” is under threat, which makes more sense given the resurgence of right-wing political parties in Europe and the destructive trade war between America and China that promises to get a lot worse before it dials down.

You could argue that globalisation, or politico-cultural capitalism, has reduced wealth inequality worldwide since the late 20th century by creating a robust global supply chain that rewards economies with clear comparative advantages in trade.

To that end, millions in India, Bangladesh, China and the so-called “Asian Tigers”prospered from taking over low-skill mass manufacturing or Business Process Outsourcing (BPO)work from Western companies that happily saw their operational over heads slashed by half.

Also, globalisation has drastically cut the prices of consumer goods while greatly increasing the choices available to them.It has also reduced the technological gap between the developed and developing world. In that respect, capitalism has “provided for the many.”

Rajan further opines in the interview that while a “modest education” was once enough to guarantee a “middle-class job,” the massive shakedown to global economies from the 2008 banking crisis means you now need a “really good education” to “succeed.”

Yet if we have learned anything over the past two decades, it is that the tech visionaries shaping our future are getting younger and younger and not necessarily more qualified.

Moreover, going forward into the age of Artificial Intelligence (AI) where the clock-punching, nine-to-five jobs will disappear, self-learning machines will take over most entry-level grunt work, and creating value will instead become the benchmark of success,a “really good education” without strong skill-sets that align with personal aptitude will be meaningless.

This is the dilemma for collectivist developing countries.It is no surprise that most technological innovations come from the West that treats individuality and risk-taking as virtuous behaviour. Now think of Asia and its “herd mentality.”Here, the entire social construct revolves around walking the well-worn path to “avoid failure.”

Thus, Asian young adults will routinely pick majors in college that are trending, say computer coding, yet ill-suited to their personal strengths. Consequently, they remain mediocre as employees and reduce the dynamism of the economy.

More alarmingly, a great percentage of new graduates will inevitably compete for jobs the economy cannot yet produce, and this raises unemployment rates. It is a vicious and demoralizing circle.

In short, capitalism’s status as the organising principle of global economies won’t bethreatened anytime soon. What is at risk though is our way of life as AI promises to vastly disrupt how work is rewarded in the next 20 years.And as with the Internet thirty years ago, early-adopter societies will prosper while those slow to adapt will keep playing catch-up.

The writer is an Ipoh-based independent journalist