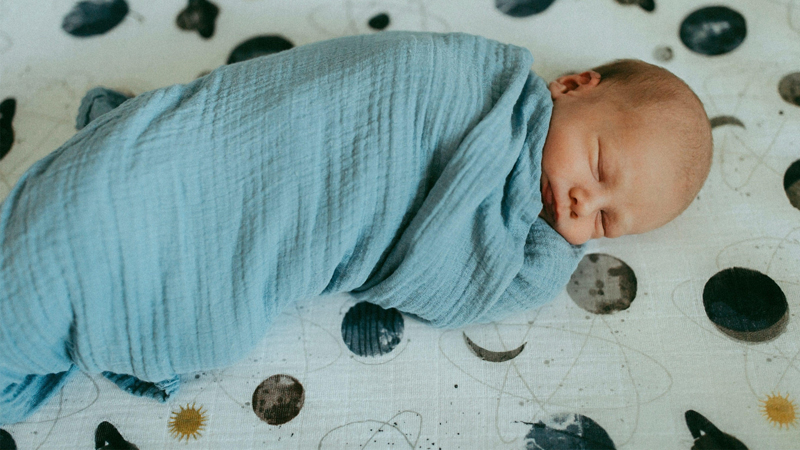 In many cultures around the world, newborn babies are swaddled to help them settle and fall asleep. Parents need to be warned about the risks and after effects of wrapping their little ones so tightly.

Although the popular cloth-wrapping method, which has been used for centuries, is used to help calm and soothe young babies, medical experts have seriously warned parents to be careful with their traditional techniques of swaddling, as the practice has the real potential to do more harm than good.

Many researchers have proved that infants whose hips were normal at birth may develop hip dysplasia and joint stiffness because of improper swaddling during infancy. Improper swaddling is closely fitted wrapping the baby with the legs straight out and pressed together in a tight bundle.

After birth, swaddling a newborn too tightly around the hips also can sometimes cause Developmental Dysplasia of the Hip (DDH).

After birth, swaddling a newborn too tightly around the hips also can sometimes cause DDH. I still remember a case while working as paediatric registrar in children’s clinics. Parents of a baby girl learnt the hard way as their daughter, who was born normal began walking differently as compared to other toddlers with a bit of a limp.

That was until child was diagnosed with hip dysplasia as a toddler. History revealed a tight swaddling at infancy. Child was quite normal at the time of birth and there was no history of fall down. That baby was detected quite late with DDH so she had to go through the process of realigning the hips. Since then that baby girl has undergone two surgeries and worn two full body casts to help the hip to grow back into normal shape. So, all parents are strictly warned to not swaddle their babies too tightly, it may cause dysplasia.

Major causes of dysplasia, joint stiffness and joint dislocation in infants may include incorrect and tight swaddling. The condition can be difficult for parents to detect because the babies are not usually in any pain or major discomfort at time, but signs include a strong curve in baby’s lower back, asymmetrical buttock crumples and the child’s hip clicking, cracking or popping.

Many researchers have shown that these conditions are increased three-folds in babies over the age of three to four months.

Adelaide Children’s Hospital’s orthopaedic surgeon Dr Nicole William says that more than 80 percent of babies in Australia may be swaddled inappropriately. This is a situation in developed countries; the condition is rather worse in developing countries where we follow most of myths inherited from our culture and social norms.

Unfortunately, we are wrapping our newborns in extended position and tightened up in traditional coloured ropes with their legs tightly together and hands extended like a mummy. This posture may compromise newborns circulatory, respiratory, locomotors and musculoskeletal system. Swaddling a baby tightly in our traditional ways may put a baby in state of indigestion leading to repeated vomiting and poor weight gain and overall growth. A firmly tightened up newborn in a traditional coloured cloth may compromise a baby’s circulation and can cause bruises on the body. It’s particularly important to let the hips to spread, move and bend up. In the womb the legs are in a prenatal foetus position, with the legs bent up across each other. After birth sudden unbending of the legs to a straight position can loosen or dislocate the joints and damage the soft cartilage of the socket. Traditional swaddling should be avoided due to the stress it can place on an infant’s hips.

After birth, swaddling a newborn too tightly around the hips also can sometimes cause DDH. I still remember a case while working as paediatric registrar in children’s clinics. Parents of a baby girl learnt the hard way as their daughter, who was born normal began walking differently as compared to other toddlers with a bit of a limp

If the brain functions are compromised, overall growth, intelligence, physical health of the baby is affected badly. In future life these problems may cause catastrophic effects on baby’s overall growth and development. Children’s gone through these traditional tightened up rope clothing and extensive swaddling, in future can suffer from knocked knees, which may restrict them to see their career in defence forces.

In many of the rural areas it has been observed that traditional clothes or ropes used to swaddle a newborn once made are being used continuously. As these clothes are repeatedly exposed to external environment they may serve as major culprit to put newborn in state of nasty infections. Swaddling for a longer duration at a time may risk the baby to get a belly button infection, skin diseases and other neonatal infections.

We should keep in mind that tight swaddling doesn’t work to keep babies calm, majority of babies will kick and struggle against the constraint. Most of babies will often “let their parents know” they are not comfortable with swaddling by kicking and resisting. If baby persistently trying to turn over onto her belly when sleeping, swaddling is more dangerous in that case due to a significant increase the risk of Sudden Infant Death Syndrome (SIDS). A recent research proved that swaddling as a risk of SIDS, seemed to vary according to sleep position and baby’s age. The risk associated with infant being placed in the side position almost doubled among swaddled infants. We already know that being found prone is strongly associated with SIDS, but this risk increased fourfold among the swaddled infants. A number of swaddled SIDS cases have been noticed where infants were found prone either moved into this position after being placed on their side or they were older infants who rolled from the supine to the prone position. So, the risk of SIDS linked to swaddling seemed to increase in older infants.

As a paediatrician and a public health specialist, I would suggest parents not to swaddle your young ones and let them have a breath in fresh air and let their joints to grow and snuffle freely. In many cultures and traditional domains community won’t expect young ones without being swaddled. If at any cost you want to swaddle your baby than keep them in maximum comfortable position allowing them to breath comfortably and able to flex their limbs. Place your baby in the cot on his or her back to sleep while swaddled. Sleeping swaddled and on their belly can increase a baby’s risk of SIDS significantly. Use light cotton made bedding and blanket that is breathable and not liable to cause sweatiness and overheating. Don’t cover your baby’s face. This can lead to overheating or suffocation.

Swaddle too snugly and tightly may put babies at risk for sweating, overheating, decreased circulation and over-extension of their hips and knees.

Make sure their arms are comfortably close to their sides, wrap the baby from below their neck to avoid covering their face, wrap should not be too tight and must allow for movement of the baby’s hips and chest.

Avoid wrapping their legs tightly together; modify the wrap to meet the baby’s developmental changes. At the age of four to six months when baby is able to roll from their back to their tummy and then onto their back again during supervised play the use of a wrap should be stopped.

When swaddled, a baby should still have enough space for the movement of legs, with hips and knees bent slightly and turned out.

By the time a baby is about a month old, swaddling should stop or kept to a minimum so as not to impede development or limit a baby’s mobility.

The writer is a doctor currently practising in Saudi Arabia. He can be reached at drfaisalkhanarticle@gmail.com