Nimra Ahmed’s newest is bound to change your life

* A reader of this novel journeys through suspense, excitement, love, trust, betrayal, crisis and the harsh realities of life 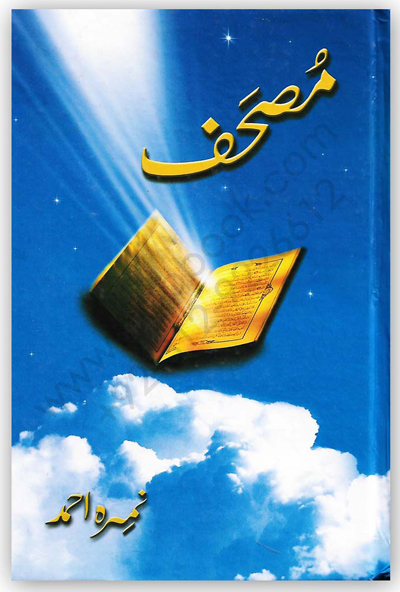 Mushaf is the most extra-ordinary, intellectual and creatively written fictional story by Nimra Ahmed, who is one of the most inspirational and thought-provoking writers of Pakistan.

The name of the novel Mushaf gives us a hint that it is a story related to religious content or it might contain some verses with beautiful meaning and deep tafsir. Yes it is connected with all these aspects with such beauty and intellect that one might have never thought of the holy Quran that way.

A reader of this novel journeys through suspense, excitement, love, trust, betrayal, crisis and the harsh realities of life. Despite having all this, this novel leaves a permanent place in the reader’s heart. It starts with a glimpse of the magnificent beauty of morning. A girl reaches a bus stand and she has a strange bag on which her name is written Mehmal Ibrahim. She was really curious about the black skinned girl who was always there at the bus stand, sitting upright, wearing a scarf, with a strange shine in her eyes and had a book with a black cover. Nimra Ahmed nailed the conversation between the black girl and Mehmal Ibrahim. It just makes you stick to the novel and it actually showed that the book had some kind of magic and that if you follow it, you would have the whole world and if you would leave it, you would be devastated.

The whole novel revolves around the life of Ibrahim, who is displeased and irritated from the world. She is a beautiful girl with crystal-like shiny eyes and brown hair often tied in a high pony tail. Her father passed away and she with her mother lives with her father’s family. She gets angry easily as she cannot withstand the atrocious behaviour of her family members. The house was her father’s property and they had no right over it.

The novel takes a very strange turn when she decides to return the mushaf to that black skinned girl and tries to make her realise that it was not the kind of a book that she portrays it to be and she knows about the holy Quran.

The whole novel revolves around the life of Mehmal, who is displeased and irritated from the world. She is a beautiful girl with crystal-like shiny eyes and brown hair often tied in a high pony tail. Her father passed away and she with her mother lives with her father’s family

The next big twist happens when Fuwaad, her cousin, fools Ibrahim and sells her to Humayun leaving the readers shocked. Ahmed just beautifully showed that you have to trust noone especially a na mehram. She is locked in a room and at that time I felt like there was no way Ibrahim could ever get out. But there was something really impressive awaiting her as she somehow manages to run away and reach the rooftop of a madrassa. Humayun is later revealed to be a police officer who wanted to gather proofs against Fuwaad.

And then, noor spreads in her life and guides her in a way one can never imagine. The way Ahmed has achieved it with her creative skills is amazing. The introduction of perfect verses related to the appropriate situation is worth pondering, for example the time of the death of her mother and how for every situation the holy Quran had all the answers.

After this unusual event, Ibraheem’s life changes as she starts to cover her head, reads mushaf and tries to understand the meaning of the verses from the holy Quran. She feels as if the holy Quran is talking to her as it is called Kalaam Paak and Kalaam in Arabic is talk. Whatever she thinks, is answered in the holy Quran.

Farishtay a hidden and masked character she met in a madrassa is Humayun’s cousin. She is later revealed to be Ibrahim’s sister and actually helps her a lot in understanding her life. Ibrahim thinks highly of Farishtay and everyone would have thought that. It was a beautiful, mature and sensible character but by the end of the novel, I started hating that character.

Ahmed beautifully conveyed the ups and downs of life and magnificently connected verses of the holy Quran with the happenings in Ibrahim’s life. This actually showed that how the holy Quran is a miracle. It is a reminder for people of the present age and this novel changed the perspective of life in my opinion.

Another important lesson it gave was that we should trust Allah and no one else. Indeed guidance is for those who seek for it. Another important thing I realised was that people who are good from the very beginning also get misled by Satan. Practicing Islam is a life long journey in which you are tested every single time even if you are very active.

I recommend you this novel and I am sure even if it didn’t change your life it would definitely leave you in great awe. In every incident of this novel is a hidden message. May Allah grant us the noor and insight to actually understand the treasure of each verse revealed by Allah.

We might not be Ibrahim but we can actually learn a lot from her. Life is all about choices.