The world bank divides world economies into three, as well as underdeveloped countries, developing countries and developed countries. Each year, according to their economic successes, the names of countries within these classes vary. The first quarter of the 21st century is over. 2018 is over. However, the recent macroeconomics topics have not changed for centuries: Inflation, Unemployment, Growth, Exchange Rates, Interest Rates and of course the stagnation. Besides all these, small economic crises are also under the influence of globalization and rapidly take over the whole world. A company that lives in one end of the world does not create large waves, but today it concerns all of the company’s partners. There are no small worlds in the economy, it is not out of the question. There are big worlds now. The reasons were not surprising. The reasons are well known by all of us; Oil, IMF, European Union, Exchange Rates, Expectations. These are just some of them.

Although the world’s least developed countries are 13 percent of the total population, they have less than 2 percent of the world’s GDP. With together the last participating country, South Sudan, exists 47 LDCs. There are 33 countries in the African continent, 13 in the Asia and the Pacific region, and 1 in the Caribbean.It aims to strengthen the capacities of science, technology and innovation of these countries, and to promote the development of national and regional innovation ecosystems. This will attract foreign technology, create domestic researches and innovations, and present them to the market. All of these will be done. And unfortunately not in 2018. So what was done in 2018?

The United States accounts for about 25% of the global economy with its $ 20.412 trillion dollar economy.The American economy is in a strong key position for all markets. In the second quarter of the year, it recorded a growth rate of 4.1 percent and 3.4 percent in the quarter. It is based on the US because it should be taken as an example for the steps of the world economy. First, the tax cut to increase the effective demand. The highest rate of growth since 2014 was attributable to the increase in consumer spending due to tax cuts. In the same period, the acceleration of orders before the increase of import duties was also a factor affecting the growth rate. Growth items are consumption expenditures, investment expenditures, public expenditures, and net exports. In the United States, he directly influenced these moves with his moves. In addition, inflation rates are 2.2%. The highest in June and July was 2.9%. Unemployment rate is 3,7%. In the US population of about 327 million, the labor force in idle capacity is quite low. 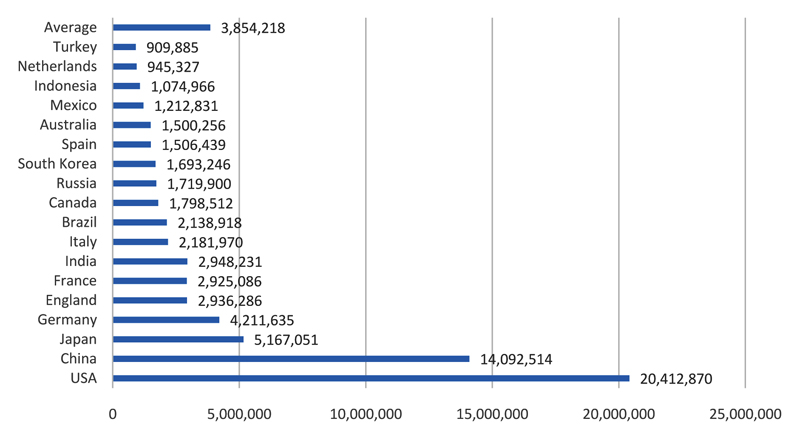 Foreign trade is a very important factor in China’s potential growth. In addition, 4.1% of the 1 billion 376 thousand population is reflected in the statistics as unemployed. This shows that 96% of the population has a share in production. The high share of the share in production, Foreign trade items, Trump’s lighter impact than expected on foreign trade brings China to the forefront. Chinese inflation rate is 1.8%. China, which exports to USA, Hong Kong, Japan and South Korea, provides these exports by producing electronic tools and IT. There are two important points here. First, the Chinese economy is to be able to export to world giants. Second, The export is with high-tech products. The increase in China’s exports is seen as an increase in global demand to Chinese Products. The increase in imports is attributed to the reduction in customs duties and domestic demand. Import is directly related to effective demand. So the people have high buying power. These are the most important influences in the second place in the world economy.

Japan is the third in the world with a production of 167 billion. 2.4 percent unemployment rate, 0.9 percent inflation rate is available. Inflation is often undesirable, which reduces the currency value of the country. However, the upward direction of price movements is a desirable situation for the producer. For the success of Japan, the average inflation rate for the last 7 years is 0.7 percent. Japan, the third largest economy of the world in 2010, the secret of success, in 1868 with the adoption of the market economy begins. 13% of the land can be processed in the country where a large industrial capacity and high-tech electronic goods, motor vehicles, office machines, ships, chemical products, textiles and processed food products are produced. These are the star steps to create success in the world economy. In Japan, where manufacturing, construction, distribution, real estate, services and communication are important industries, 75.9 percent of GDP is comprised of services, 23 percent is industry and 1.1 percent is agriculture. Japan is also hosting the Tokyo Stock Exchange, the world’s second-largest stock exchange in terms of some of the world’s largest banks and the market value of companies. The market value of publicly traded companies in 2010 was 3 trillion 537 billion dollars. The main export items are motor vehicles, electronic products, semiconductors, transport equipment, computers and chemical products. The export countries are the USA, China and the European Union. Japan’s small and medium-sized enterprises, on the other hand, attract attention with their innovative and competitive features as well as their international expertise. It accounts for 70% of the Japanese private sector. Their connection with the world is the secret of Japan being the third in the world.

Germany, which is the last country to exceed the world growth average, is the fourth most developed economy in the world. The German budget system has the features of self-renewing and self-improving in parallel with the changing economic developments. With these features, the German budget system may set an example for many countries. Germany, which targets higher government spending, remains the highest regional economy in Europe. The increase in exports by investments and the monetary policy of the European Central Bank played an important role in the rise of public revenues in 2017. While the unemployment rate in Germany is 3.4 percent, the inflation rate is 2.4 percent. Exporters German companies are breaking sales records for four years. In the first 11 months of 2017, Germany made exports of 1 trillion 180 billion Euro with an increase of 6.5 percent compared to the previous year. Companies in Germany increase their investment in production factors in parallel with demand. Germany is the most energy consuming country in Europe. Renewable energy ratio is also high and it meets 38% of its electricity.In recent years, the increase in tax and social insurance premiums in Germany has been instrumental in achieving a large surplus of the public sector for the fourth consecutive time. Thus, Germany was a little further away from the borrowing limit in the Maastricht criteria, which envisaged the budget deficit not to exceed 3 percent of GDP.

Besides the important macro variables such as inflation, unemployment, export rate n diversities of the products, which are mentioned above for the world economy, oil, central banks interest rates and even political issues play a major role. Throughout 2018 their effects were also seen. First of all, why oil is important for the world growth? What effects do you have? Rising oil prices affect household income and consumption expenditures. Considering that many countries in Europe are importers of oil, they directly affect the European economy. What else? In China, the world’s largest oil importer, inflation may also go up. That is, it directly affects China’s inflation rates. China is a producer on many issues.In order to balance inflation rates in China, the prices which are the cost of inflation is increased.This negatively affects the demand for many goods imported from China. So it affects China’s exports. With the start of the winter in the northern hemisphere, consumers can turn their energy resources into biofuels or natural gas to keep their costs low. The demand for renewable energy increases. Oil, which is a global need, is a very powerful item for the world economy. It has two-way as both the production and the consumption.But the oil meets both dollars. From here to the dollar exchange rate, everything starts with the FED after the First World War. The Central Bank of America. Therefore, the dollar, which is the most widely used currency in the world, is considered to be one of the most important tools of the US to keep the world under control.

So what we made an inferenceabout 2018 in order to be developed economy? Firstly, the Common point of The basis of modern economies is engineering. World printing equipment has machines with advanced technologies for the textile and metallurgical industries. The industrial sector is very decisive in developed economies. For example, Automotive industry is the leading sector in Germany, Japan and America. Their infrastructure is very powerful. Even technological changes are made in agriculture. It is given the importance that Domestic demand for economic growth increases. On the other hand, the high consumption expenditures of these economies are noteworthy. Since the unemployment rate is low, disposable income becomes direct consumption. The non-wasted portion of income is saving. And more importantly, savings can be turned into investments. In adddition, The use of renewable energy instead of fossil fuels is high. These are the sign of development move directly. AlsoThese are not only for 2018, but the general economy rules for having a great economy.Political stability and determination,The appreciation of the currency in real terms as stable, Increasing imports by rising external borrowing facilities,The real growth of the financial system.So, if you are an advanced country, your share will be greater than the rise in conjuncture. But in any case, the most beautiful side is that even if you are underdeveloped as a necessity of globalization, you bring that share to your country through foreign investments, the intensity of consumption expenditures and technology generation. I hope that 2019 will bring bigger opportunities to be among developed countries, if we take lesson from the rules of economy.