The Thucydides Trap: A paradigm shift from ping-pong diplomacy to gunboat diplomacy

China is currently USA’s largest trading partner with $598 billion in total trade during 2015, proving how both have become increasingly reliant on one another.

Despite this fact, there are other unfolding factors which are creating rifts in the Sino-American relations. There is another narrative going on apart from ping-pong diplomacy and that is of gunboat diplomacy.

US has enjoyed an unparalleled status in the world and intermittently asserted its hegemony with incidences like its invasion of Iraq, the Vietnam War and the Libya intervention. It never lags behind in showing its superpower status.

Therefore, the rise of China in global scenario was hard for the USA to swallow, which is why it is again using its dollar diplomacy to thwart China.

It is pertinent to mention the South China Sea conflict in any discussion of the relationship between the two regional juggernauts.

China, as the world’s largest importer of raw material and exporter of finished goods, needs the sea in order to access the market. The South China Sea encompasses China, Vietnam, Cambodia, Philippines, the Malay Peninsula and Sumatra up to the Strait of Malacca in the west. 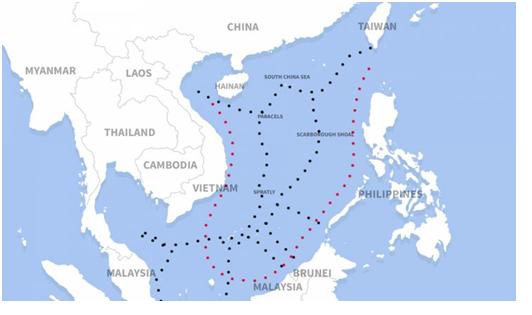 The South China sea is a seed of discord between China and America’s allies.

The Spratly Islands are important for economic and strategic factors. The area holds potentially immense, but largely unexplored, reserves of oil and natural gas. The conflict regarding the islands relate to the territorial dispute between the Philipines, Vietnam, Taiwan, Malaysia and Brunei. These islands, which are occupied by China are claimed as theirs by these five countries.

Paracel and Scarborough Shoal are occupied by China and claimed by Vietnam and the Philipines respectively. In 2015, satellite imagery showed China constructing an airfield on the Fiery Cross Reef in the Spratly islands whilst continuing its land reclamation activities at the other sites.

Historically, when China was a much larger state, these islands and areas inside the Nine-Dash Line were parts of its territory, however their claim has been deemed unlawful under the United Nations Convention on the Law of the Sea (UNCLOS).

America will never tolerate another dominant actor in the region ;therefore it has put its support behind its allies. Another significant reason for its stance is that the USA sells military artillery to the afore-mentioned countries, which accounts for a large part of US’s revenues.

The presence of American naval vessels near the Chinese occupied islands signals American interest in the region.

The recent seizure of a US naval ship by a Chinese warship in the northwest of Subic Bay has further frayed Sino-American relations. The Pentagon is firm on its stance that the unmanned underwater vessel (UUV) was only collecting data inside the South China Sea.

Furthermore, new US President Donald Trump’s phone call to the taiwanese president was another blow to the two behemoths’ relations, as it was perceived as a rejection of the long-standing ‘One China Policy’ position.

In addition, another island, called the Sankaku Island, in the East China sea has been claimed by China; however it is currently under Japanese control., making the future ownership of the resource rich region unpredictable.

The intransigent postions of these states, the ceaseless skirmishes and the sabre-rattling by the US and its allies makes the region volatile, a trade risk.

China, therefore needs a safe route for trading, which ultimately compels it to focus on Gwadar. This is the reason why the ‘One Belt, One Road’ initiative has become the centerpiece of China’s economic diplomacy.

On the other hand, efforts to sabotage the China Pakistan Economic Corridor by India are burgeoning; a move which has both it and the US’s mutual interests at heart.

In order to maintain world peace, both the countries need to resolve their issues through diplomatic means and cede their intransigence; otherwise a war is near inexorable.