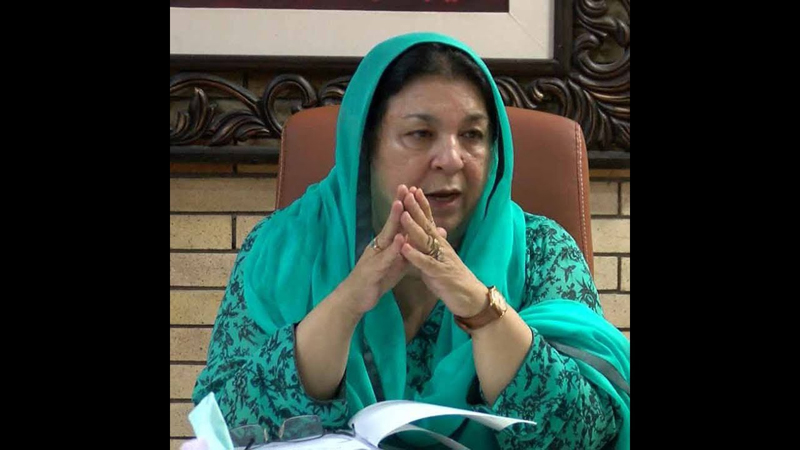 LAHORE: Punjab Health Minister Dr Yasmin Rashid has announced that a bill prohibiting the disclosure of gender during the pregnancy would be tabled soon to end the trend of sex-selective abortion.

She revealed this while addressing a seminar on “Ending Gender-Based Violence” held under the ambit of the Punjab Government in collaboration with the United Nations Entity for Gender Equality and the Empowerment of Women (UNWOMEN).

“This saddens me that some people get to know about the sex of the baby during pregnancy and abort the child if it were not a boy,” she regretted.

She added that Prime Minister Imran Khan openly accredits his mother for his success, a proof of which is the establishment of Shaukat Khanum Cancer Hospital.

The provincial health minister reiterated that no society can move forward without empowering women. “Violence against a woman disturbs the whole family and society in the larger context,” she said.

She regretted that this vulnerability was not exclusive to women from developing countries and appreciated UNWOMEN for joining hands with Punjab government to end violence against women.

“Pakistan stands at number 6 in the list of countries where gender-based violence is a common practice. Time has come to push Pakistan in a new direction by empowering our woman folk”, she concluded.

A large number of patients, parents, doctors and social workers from all over the country are attending the conference. Punjab Governor Chaudhry Muhamamed Sarwar and Pakistan Bail ul Maal MD Aon Abbas Buppi were the chief guest and the guest of honour, respectively at the inauguration ceremony of the conference.

“These children require regular monthly blood transfusions and the treatment to stay alive. Since there is no available cure to the disorder, the only hope lies in adopting a preventive programme on the line pursued by countries like Italy, Cyprus and Iran,” she added.

The minister said that the government of Punjab took the lead and initiated Punjab Thalassaemia Prevention Project (PTPP), which was unique and could be compared with any other preventive programme of the world. “The project is providing services free of cost in all the 36 districts of Punjab. Furthermore, the government is soon going to introduce a law on mandatory premarital thalassaemia screening in the province.”

Addressing the ceremony, Punjab Governor Chaudhry Muhamamed Sarwar said it was heartening to see that Thalassaemia Federation and its member organizations were serving the nation by providing the much-needed treatment to patients all over the country. “I am pleased to see that experts from all over the country presenting the latest treatment and prevention protocols at the conference. The government under the leadership of Imran Khan is committed to providing the best of the medical services to the people of the country. I am sure that with Dr Yasmin Rashid being the health minister of Punjab, the neglected area will get its due share.”