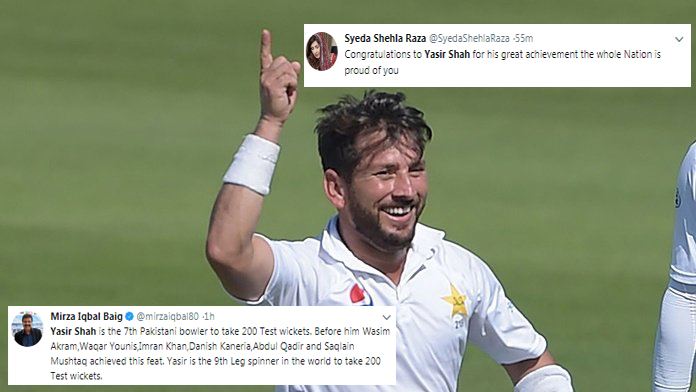 Previously, the record was set by the Australian leg-spinner Clarrie Grimmett after he took 200 wickets in 36 Tests match in 1936.

Not only this, Shah is also the joint second fastest to take 100 wickets in only 17 Tests after Englishman George Lohmann who set the target in 16 matches during a Test in Johannesburg in 1896.

However, the entire nation was eagerly waiting for him to break the record.

Even Pakistan’s Information Minister Fawad Chaudhry tweeted on December 4 that the nation is waiting for Shah to break the record as its would be a great milestone for him and Pakistan cricket.

Today, as soon as, he took the 200th wicket people went crazy over his success and took to internet.

The Pakistani leg-spinner is being praised and congratulated by the Cricketers, fans, politicians and journalists all around the world for achieving this landmark. People in Pakistan are especially proud to see their bowler achieving success in hardest format of cricket. The hashtag #YasirShah is currently trending on Twitter.

Here’s how twitter reacted over Shah creating history in Tests:

Yasir Shah smashes the 82-year-old record to become the fastest bowler in Tests to pick up 200 wickets. pic.twitter.com/W0WKIyPkCv

PPP leader said, ‘Whole nation is proud of you’.

Congratulations to our pride of Swabi Pakistan Yasir Shah for breaking a 82 years old record. Massive achievement MashALLAH. Rare talent we have. You are our hero dear @Shah64Y

‘Pakistan dealing in world records in 2018 across formats’

Pakistan dealing in world records in 2018 across formats. #Cricket

If you have anything to say about the story? Write in the comment section below.