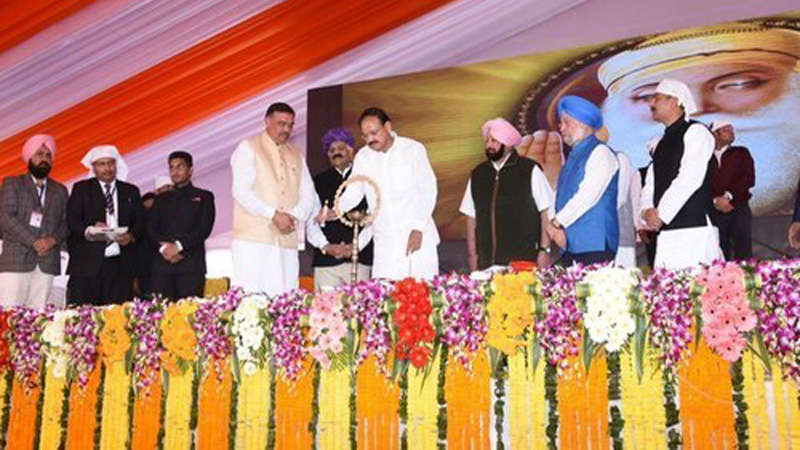 India’s vice-president M Venkaiah Naidu on Monday laid the foundation stone for the construction of the four-km-long corridor connecting Dera Baba Nanak in Gurdaspur on the Indian side with Gurdwara Kartarpur Sahib in Pakistan.

Prime Minister Imran Khan will perform the groundbreaking of the corridor on Wednesday [Nov 28]. The proposal to construct the corridor providing visa-free access to Sikh pilgrims was renewed by Army Chief Gen Qamar Javed Bajwa in August this year.

Speaking at the ground breaking ceremony, Naidu said, “The corridor will become a symbol of love and peace between both countries. This is a momentous and historic day […] we are fulfilling the wish of thousands of Sikh devotees.”

Meanwhile, Indian Punjab’s Chief Minister Captain Amarinder Singh took a confrontational approach, while speaking at the event. He said Pakistan must make sure that the atmosphere is not harmed.

“I did this in protest against Parkash and Sukhbir Badal’s names on the stone. Why is their name here? They are not part of the executive, it is not BJP-Akali event,” the minister said.

Other opposition leaders also spoke against the ruling party. A Congress member said that the Modi government went ahead with the foundation stone ceremony two days before Pakistan, without preparing the layout. “The hurry was only to pre-empt the ground-breaking ceremony by Pakistan Prime Minister Imran Khan on November 28,” he was quoted as saying.

The Kartarpur corridor project had been lying dormant due to the ongoing spell of tense relations between the two neighbours since 1988. The proposal to construct the corridor providing visa-free access to Sikh pilgrims had been revived by Army Chief Gen Qamar Javed Bajwa in August this year during his meeting with Indian lawmaker and former cricketer Navjot Singh Sidhu.

The invitation has been accepted by Sidhu, who has termed the development historic. “This day will indeed break ground,” Sidhu said in his response to the invite. “As our two nations take this first step, the Kartarpur Spirit can make pilgrims of us all, venturing out on a journey that breaks the barriers of history and opens the borders of the heart and the mind.”

The chief minister of Indian Punjab has thanked Foreign Minister Shah Mahmood Qureshi for the invitation but has declined it. Swaraj has also excused herself from attending the ceremony, citing ‘prior commitments’. Indian Minister for Food Processing Industries Harsimrat Kaur Badal and Minister of State for Housing and Urban Affairs Shri Hardeep Singh Puri will attend the ceremony in Kartarpur Sahib as representatives of the Indian government.