Pakistani Prime Minister Imran Khan is expected to clinch wide-ranging trade and investment deals during his meetings with the UAE leadership today, but all eyes will be on the crucial $3-6 billion bailout package that he expects to take home at the end of the day.

According to Pakistan’s Foreign Office, the prime minister will undertake a day-long visit to the UAE at the invitation of His Highness Sheikh Mohamed bin Zayed Al Nahyan, Crown Prince of Abu Dhabi and Deputy Supreme Commander of the UAE Armed Forces.

After $6 billion in aid from Saudi Arabia, and another package from China whose details have not been disclosed, a similar deal with the UAE would go a long way in easing Pakistan’s balance of payments (BoP) situation. It would also put the country on a better footing in ongoing negotiations with the IMF.

“The two governments have worked on details of the package for some time now so the leaders can agree on the final details,” said Information Minister Fawad Chaudhary, though he did not talk about the size of the expected bailout.

“The UAE and Pakistan have very close ties at all levels and are working closely at this important moment as well, which is why their leadership has invited Prime Minister Imran Khan. Yes, they have worked it out,” Chaudhary added.

Most of the details about trade deals and likely bailout package, expected to be announced later today, were finalised when UAE Foreign Minister Shaikh Abdullah bin Zayed Al Nahyan led a delegation of the country’s top business and corporate leaders to Islamabad last month.

“Such negotiations go on for a number of rounds and today’s meeting will be the first such interaction at the highest level,” said former finance minister Salman Shah, who was part of the team that successfully led the country out of the last major BoP crisis in General Musharraf’s time. 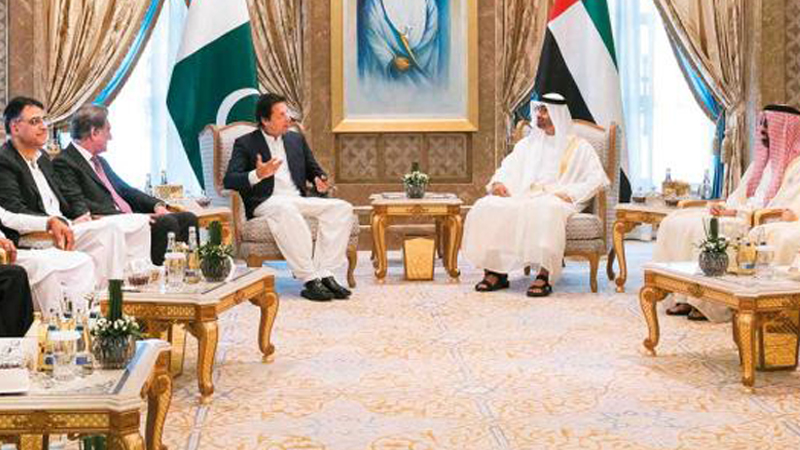 “And they are not just about bailouts. If they are successful, Pakistan will be able to attract foreign investment in large amounts.”

The UAE has surplus investment, Shah added, and its sovereign wealth fund — the Abu Dhabi Investment Authority, which was part of Shaikh Abdullah’s delegation — makes big strategic investments across the world. If such investments are routed towards Pakistan, others will also follow.

Imran Khan’s latest visit to the UAE comes nearly two months after he first visited the Emirates following his election as the prime minister.