* The YPDA is a newly established association comprising of young talents 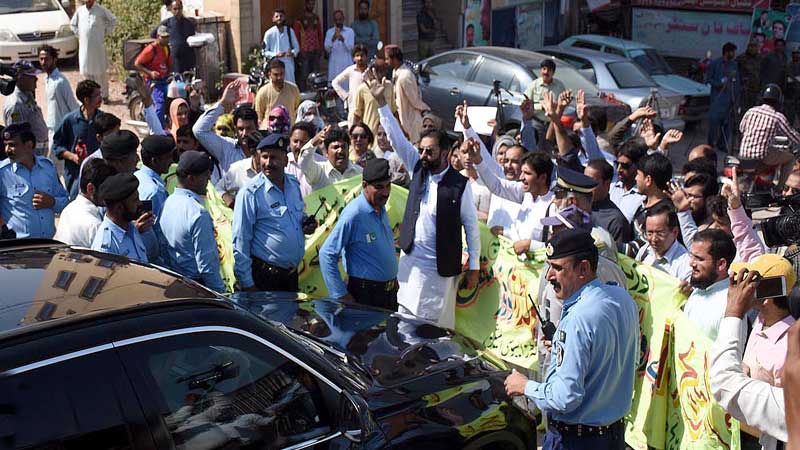 ISLAMABAD: Young PhD doctors on Monday staged protest outside Prime Minister Imran Khan’s residence in Bani Gala against their unemployment, claiming that the Higher Education Commission (HEC) has failed to provide them jobs despite written agreements.

Led by Young PhD Doctors Association (YPDA), a large number of scholars gathered at the main entrance of PM residence, carrying placards and banners in their hands. They chanted slogans against the poor polices of federal government and the HEC.

YPDA is a newly established association comprising of young talents. It was created in a reaction when a number of scholars got no relief from anywhere in terms of employment despite being assured by the HEC.

The scholars said that they were compelled to protest due to unemployment they have been facing since years.

“We knocked each door, went everywhere including pledging to Supreme Court, the HEC as well as the federal education ministry but all in vain,” they said adding that finding no other option, we are here to seek our rights and have decided not to leave the place until assurance for the resolution of our issues.

During the protest, they also stopped PM Imran Khan when he was heading towards his house with his squad. However, the police became successful in dispersing the crowd blocking Imran Khan’s way.

Around 800 PhD scholars from various local and international universities are looking for their jobs since the past many years. The protestors said that that the federal government through HEC awarded dozens of indigenous and international scholarships for educational and research opportunity to Pakistani students and scholars wherein around 5,000 indigenous fellowship programmes worth Rs 1 million have been granted in the last three years.

The protesters said that through International Research Support Programme (IRSP), the federal government is investing around Rs 1 million within six months abroad to complete research training. Under the programme, the scholars said that they are bound to serve for a year in any university in Pakistan while after completion of this period, they alleged, the commission made no policies under which these scholars could be provided jobs in any public or private sector university.

According to the obtained information, the HEC is providing need based opportunity by HEC Need Based Programme which is a United States agency for international development funds and these will be Federally Administered Tribal Areas and Baloch scholarships. The commission is investing Rs 2 million to Rs 3 million on a single PhD nationally.

The HEC also claimed officially that that 5,536 PhDs nationally are produced within five years. Similarly, a huge amount is being invested in international programmes.

The HEC will also provide an opportunity to PhD degree holders to adjust in foreign universities through the Interim PhD Fresh Programme (IPFP). In this programme, the HEC awards Rs 140,000 to awardees for a year.

The HEC has failed to implement its IPFP agreement in universities in an effective way. Moreover, the HEC has not properly recorded how many young PhDs are working in Pakistan.

Before this, these scholars submitted applications in the Human Rights Cell of Supreme Court in which they addressed Chief Justice Saqib Nisar to make influence of the apex court for resolving the issue.

After long hours’ consistence, the scholars called off the protest when PM’s Special Assistant Naeemul Haq intervened in the matter and assured them of resolving the matter. “Your all reasonable demands would be reviewed on priority basis,” he told the protesters and added that his government would make all possible measures in this regard.