Seminar highlights historical and cultural links between Pakistan and Korea 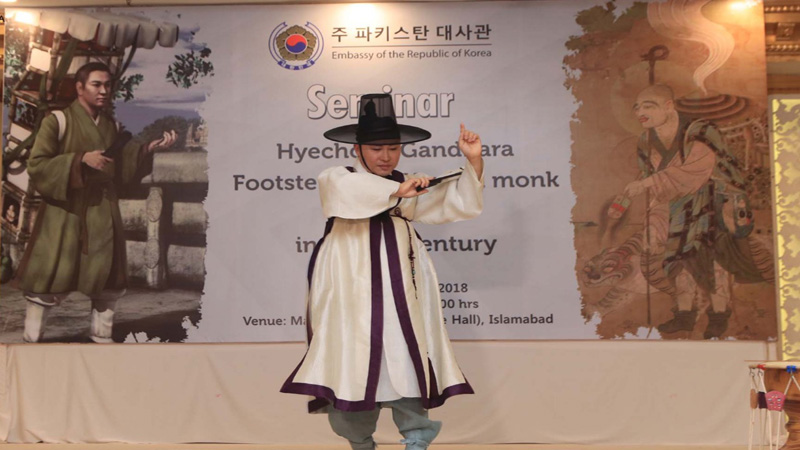 A seminar titled Hyecho in Gandhara – Footsteps of a Korean Monk in the 8th Century took place on Thursday.

The seminar organised by the Embassy of the Republic of Korea highlighted the historical and cultural linkages between Korean and Pakistani people centuries ago. Three eminent scholars including Dr Muhammad Farooq Swati, Dr Esther Park and Dr So Gilsu made presentations at the seminar, shedding light on the travelogue of the Korean monk Heycho who travelled around Pakistan in the 8th Century. The scholars also highlighted the impact of these early travels on the spread of Buddhism in the Korean peninsula and around the world.

Dr Muhammad Farooq Swati presented an insight into the importance of the Khyber Pakhtunkhwa region as a historical melting pot for cultures, traditions, art work and architecture. Dr Esther Park spoke about the memoirs of Heycho titled Memoir of the Pilgrimage to the Five Kingdoms of India which is one of the earliest recorded travelogues that vividly describe many areas of Pakistan in the 8th Century. Dr Park also suggested taking steps for increasing Korean Buddhist tourists to Pakistan. Dr So Gilsu spoke about his recent travels to China and Pakistan during which he followed the ancient routes taken by Heycho.

The audience also watched the classical Korean Sunbi Dance performance by Dr Han Young Yong. Sunbi refers to academia in Josun Dynasty that focuses on studying with neither any official position nor rewards.

On the occasion, Korean Ambassador Kwak Sung-Kyu introduced a co-project for preservation and treatment of cultural relics which is progressing between the Korean and the Pakistani government. He also committed and offered to further work together on the federal or provincial government level, to enhance cultural interactions and people-to-people exchanges in the coming days.

Earlier, in his inaugural speech, Kwak Sung-Kyu said today’s seminar would soon be followed by a kind of Memorandum of Understanding agreement which would facilitate cooperation between the Korean Culture Heritage Foundation and the Department of Archaeology & Museum of Pakistan. Through this project, the Korean Foundation would like to be instrumental in Pakistan’s capability building to conserve the cultural heritage and to treat the valuable relics in proper ways.