What does a ‘safer future’ mean to you and your community?

At the sight of a woman who lost her child my mother burst into tears right there. I didn't quite know what to think or do because, my mother's fears were not far from reality

A woman around the age of 80 sits on a rocking chair with a journal. The journal holds all the memories of her youth. She smiles to herself yet feels a tinge of sorrow.

Her childhood had been filled with pleasure and joy. She had found happiness and beauty in everything. But sometimes life was frightening, especially in the year, 2014. She opened pages 344-45 where 16 December was marked. She had read her granddaughter every story from all the journals she had kept, all but this one.

And on that day, 16 December 2081, marked the sixty-seventh anniversary of the Peshawar Attack of 2014. She was going to read it to Zainab.

Zainab was writing in her journal. Her Nani, Fatima told her that she had inherited her love of writing from her.

Every time she would visit her, she would tell at least one story from her journals. She had grown up listening to her Nani’s stories of the world.

She smiled to herself as she saw her journal. She had grown up listening to happy memories that she would cherish all her life. She knew life was not always this way in Pakistan. The War on Terror of the early 2000s had proved that. It was a time when terrorism was common. She had heard stories of parents being scared of sending their children to school. She had heard about Mosques and Churches being attacked in that time. Her grandmother had lived through that time. She had never been fearful of things like these.

Nani calls out, “Zaini, dear”. The young girl with black hair and chocolate brown eyes comes out of her room. Her face lights up and she enters the balcony where Nani is.

Nani looks morose, “Today I am going to tell you a story from one of my journals. It’s one I have kept from you”.  Zainab looks a bit confused but simply nods her head.

The old woman looks at the young one, her eyes sparkle and then begins the story. She had spent her childhood dreaming of a country she believed Pakistan could not become. Yet here she was, in front of Zainab, a girl growing up in a safe Pakistan, a country where no one was afraid to step out and go to school.

Outside in the lounge I heard my mother exclaim, “She’s not going to school!” Confusion and surprise entered my mind.

I have been to school when there was not a single student in the classroom. I’ve been to school after attacks on hospitals, roads, mosques. No matter what happens I go to school. And on top of that, I was absent today because I had to go to the passport office. So what had happened? Why would she allow me to skip so many school days? I went outside and turned on the TV.

A young Pakistani man in a formal suit was talking. Usually they talk about our somewhat mundane lives. But this time they were talking about something else, something that had caused my mother’s outburst.

“APS, Army Public School in Peshawar has just been attacked by six gunman of the terrorist organisation Tehrik-i-Taliban. 159 civilians left dead and 114 injured.” This was preceded by a clip of a mother sobbing and screaming, “I went to school to pick my son up. I picked up his body.”

At the sight of a woman who lost her child my mother burst into tears right there. I didn’t quite know what to think or do because, my mother’s fears were not far from reality; it could have been her on TV and that child could have been me if i had gone to school that day. If I had chosen to go today and had planned to go to the passport office tomorrow or yesterday- my picture could have been on TV. I could have been a Peshawar attack victim.

I could have been dead. 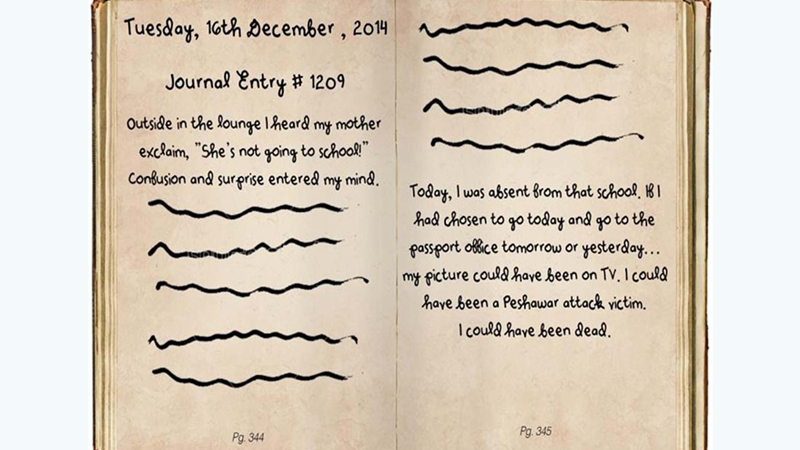