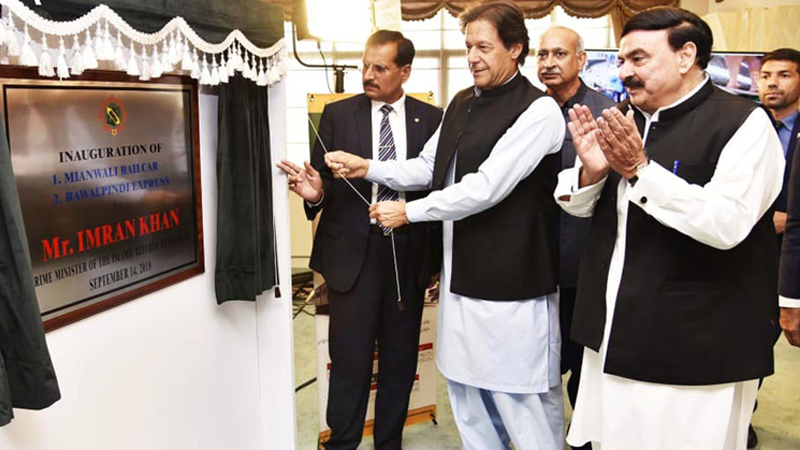 The Prime Minister Imran Khan said that the government is focusing on expanding and upgrading country’s rail network to ensure provision of cheap and fast travelling facilities for the common man.

PM made this statement while inaugurating the Mianwali Railcar and Rawalpindi Express on Friday.

Inaugurating the two trains that will operate from Rawalpindi to Mianwali and Rawalpindi to Lahore, the Prime Minister said that the focus of his government is on providing best possible facilities to the poor segments of the society.

He said the railways can play a key role in ensuring equitable development like it’s done in China, which today has the highest concentration of high speed trains and has played a key role in the country’s progress.

“Train services provide travel facilities to common man and the governments, which give priority to the poor, focus on development of rail system,” the Prime Minister said.

He was appreciative of initiative taken by the railways to utilise its unused land and said that with proper utilisation, the organisation could repay its huge debt.

He however categorically stated that while the railways was getting the encroachments removed and putting an end to the reign of “qabza mafia”, no one should disturb the people living in the slums.

Prime Minister Imran Khan said that he was pleased to note that the Minister for Railways Sheikh Rashid Ahmed has always focused on the uplift of the common man and now today through the improvement of the rail network, he was doing a good service for them. He was appreciative of the fact that the Pakistan Railways has announced free travel for passengers of the age of 75 and half for those over 65.

Imran Khan regretted that the governments in the past focused only on uplift of the facilities for the elite and mentioned the separate school systems and private hospitals, while the poor paid for their ostentatious lifestyle through 90% indirect taxation. He said Pakistan was probably the only country where the poor subsidise the rich.

He said that it is a big proof of elitism in the country that railway system was neglected by the previous government and said around 1100 kilometres of rail track was established by the British, while nothing significant has been added since Pakistan’s independence. He said while the focus in the past was only on roads, the rail network that can carry freight and passengers at far lesser cost has been ignored.

He said China has focused on the uplift of the poorest of its poor and has made astounding progress over the past few decades. He said he would be visiting China in November and would discuss its progress in all sectors, particularly in the railways sector. He said under the China Pakistan Economic Corridor (CPEC) the Main Line-1 project would provide high speed trains between Karachi and Peshawar.

Prime Minister Imran Khan said that his government is strictly adhering to a policy of simplicity, as it strictly believes that the money of the people should be spent on their welfare.

The Prime Minister unveiled the plaque to inaugurate the train services at the PM Office as a large television screen showed live the image of the train from the Rawalpindi Railway Station.

Minister for Railways Sheikh Rashid Ahmed thanked the Prime Minister for sparing time for the inauguration from his back-to-back meetings and said the two trains have been readied out of discarded train carriages in a short period of 20 days. He announced two more trains for the people of Sindh by October 16, and said all efforts would be undertaken for the realisation of prime minister’s vision.

He said the railway plans to run 12 to 15 additional freight trains and sought the government’s assistance in directing the PSO and other state run organisations to use the train service. He said it would not only provide cheaper cost of transportation, but also reduce traffic congestion on roads.

He said 318 acres of land would be acquired at Gwadar for Pakistan Railways, while train service would be initiated for border posts at Taftan and Torkham to facilitate passengers and freight services. He said the railway land would be freed from ‘qabza’ groups and placed on government’s disposal in 15 days.

Sheikh Rashid said that Pakistan Railways would also donate Rs 100 million annually to the Dams Fund of the Chief Justice and Prime Minister by adding Rs 1 to ordinary fare and Rs 10 to business fare.

He said Pakistan Railways was determined to cut down on its losses and turn into a profit earning organisation within the shortest period of time.