Egypt sentences 75 to death, hundreds to jail over 2013 sit-in 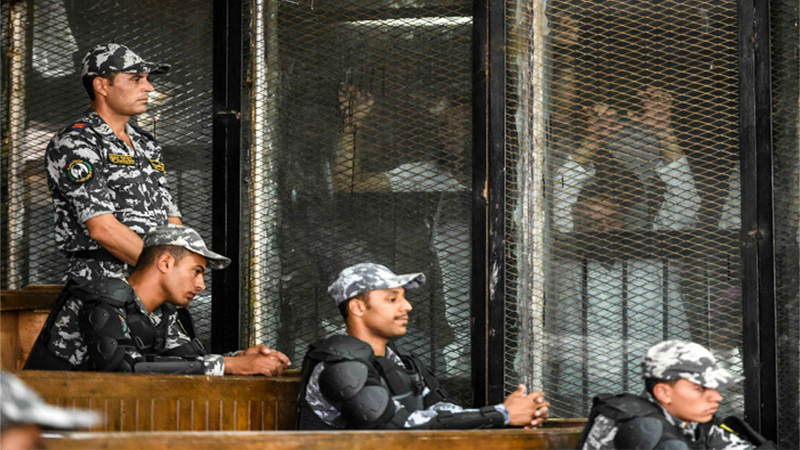 An Egyptian court on Saturday issued death sentences for 75 people, including prominent Islamist leaders, and jailed more than 600 others over a 2013 sit-in which ended with the killing of hundreds of protesters by security forces.

The sentencing concluded the mass trial of some 700 people accused of offences including murder and inciting violence during the pro-Muslim Brotherhood protest at Rabaa Adawiya square in Cairo.

The government says many protesters were armed and that eight members of the security forces were killed. It initially said more than 40 police had died.

Cases were dropped against five people who had died while in prison, judicial sources said, without giving further details.

Following weeks of protests in 2013 against the ouster of Islamist President Mohamed Mursi by the military — led at the time by Egypt’s current president, Abdel Fattah al-Sisi — security forces violently broke up the demonstrators at Rabaa square.

They arrested hundreds of people who were charged with inciting violence, murder and organising illegal protests.

Rights groups have criticised the trial for including many peaceful protesters and journalists.

An award-winning photographer who covered the protests, Mahmoud Abu Zeid, was sentenced to five years in jail, but would soon be released because his five years in detention during the trial are counted towards the sentence, judicial sources said.

Abu Zeid, also known as Shawkan, was awarded a United Nations press freedom prize this year. He was charged with belonging to a banned group and possessing firearms.

“We condemn today’s verdict in the strongest terms,” Amnesty International said in a statement. “The fact that not a single police officer has been brought to account … shows what a mockery of justice this trial was.”

Since Sisi was elected president in 2014, authorities have justified a crackdown on dissent and freedoms as being directed at militants and saboteurs trying to undermine the state.

Death sentences have been handed down to hundreds of his political opponents on charges such as belonging to an illegal organization or planning to carry out an attack.

Supporters say a security crackdown is needed to stabilise Egypt, which still faces an Islamist insurgency in the Sinai Peninsula and is reeling financially from years of unrest.

Critics say the erosion of freedoms and silencing of political opponents is the worst Egypt has seen in its modern history.