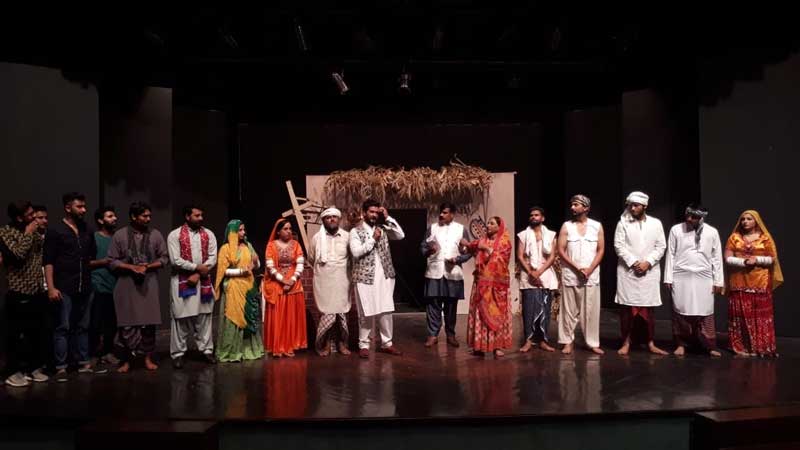 The 12th annual Alhamra Theatre festival is underway in Lahore beginning from August 30 and will last until September 11, 2018.

The festival is running shows daily to a packed audience in Alhamra Arts Council’s Hall 2 and is presented by the Lahore Arts Council.

Play “Sanwari” was performed on Monday and was based on the current water crises in Pakistan. Directed by playwright and director Shahid Pasha, the play was based in Cholistan Desert and created awareness about the lack of water and the need to preserve it.

Based in a village undergoing drought, the story followed the events in a village where water resources were depleting and lack of rain had made a family make rash choices for their daughter’s future. Ultimately, a timely sacrifice by the girl grants the village rainfall after months of drought but means her own life is sacrificed. The play highlighted social injustices like women’s oppression in patriarchal cultures and the role of women in rural areas.

“Sanwari” director Shahid Pasha said, “We all know that this issue exists and I thought it was necessary to make a story about this issue. The artists were all new and worked hard to learn the play. The play was all organised within a week. I have worked previously on a number of plays on public issues including women’s rights.”

The director of the festival, fine artist Zulfiqar Ali Zulfi said they aim to make the festival a biannual attraction, owing to the number of people who have been attending the events over the years.

“Our aim is to make parallel theatre popular alongside the commercial one. We aim to highlight social issues in our plays as much as possible. This is why we have such a wide variety of plays including classical, Sufi and traditional ones,” he said.

The festival runs shows daily at 7pm in Alhamra’s Hall 2.