As a manifestation of good relations between Pakistan and Azerbaijan, HeydarAliyev Foundation started its charitable activities in Pakistan 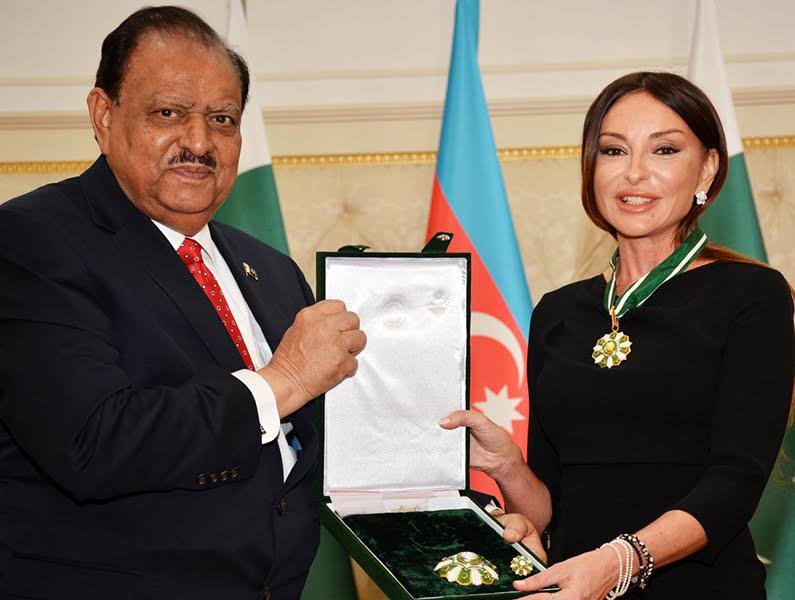 When Mehriban Aliyeva was elected as the first vice-president of Azerbaijan the world became interested in her story. She has been a dynamic politician and public figure in the contemporary Muslim world.

As a symbol of beautiful synthesis of western and eastern cultural traditions, she emerged as a source of inspiration for the women in the Muslim world. Being a champion of culture and art, she has contributed meaningfully to the preservation of Muslim and human civilization. She intiated the Friends of Azerbaijani Culture foundation in 1995 which aims at promoting her country’s cultural wealth; through events and publications.

The female leader has her own clear position and a civic standing; plays an important role in the political spectrum as the President of Heydar Aliyev Foundation and, Goodwill Ambassador of UNESCO and ISESCO.

First Lady of Azerbaijan Mehriban Aliyeva was born to a well-known Azerbaijani family of intellectuals.  Her grandfather was famous Azerbaijani writer Mir-Jalal Pashayev, her mother, Aida Imanguliyeva was a prominent philologist and Arabist and her father Arif Pashayev is also a well-known scholar, and the rector of the National Aviation Academy in Baku.

In 2004, Mehriban Aliyeva became the president of the Heydar Aliyev Foundation named after the National Leader of Azerbaijan;Heydar Aliyev. The main goals of the foundation are to support promotion and implementation of the policy guidelines aimed at the country’s social, economic and cultural development It aims to increase the living standards and further integration with the civilized world and to develop and implement various programs and projects in science, culture, healthcare, sports, and environment in Azerbaijan.

In this direction, Heydar Aliyev Foundation under her leadership has performed instrumental role in the construction of new hospitals, schools, colleges across Azerbaijan. The Thalassemia Center provides free of cost treatment and was constructed in Baku in 2007. The Foundation initiated a national campaign for breastfeeding and holds summer camps for the integration of disabled children into society.

In the cultural sphere, Mehriban Aliyeva took steps in preserving Mugham — the traditional classical music of Azerbaijan. The Foundation became instrumental in the establishment of an International Mugham Centre in Baku.

Being the land of tolerance, peaceful coexistence and harmony between people of different faiths, Azerbaijan ensures that religious communities live and worship freely. In this regard,  the Heydar Aliyev Foundation reconstructed a number of mosques and shrines in Azerbaijan, including an oldest Buzovna mosque, St. Mary`s Catholic Church, orthodox church, in compliance with the project of “Azerbaijan — home to tolerance”.

As a head of the Baku-2015 first European Games’ organizing committee Mehriban Aliyeva was conferred the High Order — the most prestigious award given by the European Olympic Committee — for her special services to the development of sports in Europe.

Due to her activities and role in different spheres across the world, MehribanAliyeva was awarded Legion of Honour order of France, Honorary Diploma of the State of Kuwait, Hilal-e-Pakistan civilian award of Pakistan, Order of Merit of the Republic of Poland and SretenjskiOrden of Serbia

The leadership of Mehriban Aliyeva in the organizing committee of Islamic Solidarity Games, which took place in 2017, in Baku, helped strength the ties between various Muslim nations. She also emphasised on Azerbaijan’s importance in the Muslim world, stating that “We are proud to be a part of Islamic history and heritage, to share Islamic values and Islam is a religion of peace and mercy.”

As a manifestation of good relations between Pakistan and Azerbaijan, the Heydar Aliyev Foundation started its charitable activities in Pakistan soon after the disastrous earthquake of 2005. The natural calamity left Muzaffarabad (AJK) in ruins and flattened the school in Rara settlement.  Mehriban Aliyeva took an initiative to build a new modern school for girls in place of destroyed one in Rara. Consequently a school for 500 girls was built. The Foundation regularly provides the school with school materials, books, computers and other means.

The First Lady of Azerbaijan carried out a series of health care, education and humanitarian projects in the provinces of Pakistan. Hepatitis B vaccination and the open-heart surgeries were implemented in collaboration with Kulsum International Hospital at Edhi Home, Akbar Care Institute for Cerebral Palsy in Peshawar, Women and Children Hospital at Lakki Marwat. The Foundation joined the celebrations on the World Blood Donor Day in Peshawar, trying to raise awareness of safe blood and blood products, which are much needed.

She also donated a fully equipped ambulance and thousands of blood collection bags to the Hamza Foundation that handles safe blood transfusion for the beneficiaries on a voluntary basis. During the Holy Month of Ramazan, the Foundation hosted the iftari dinners, involving more than twelve hundred beneficiaries of Pakistan Sweet Home (Pakistan Bait-ul-Mal) orphanages in Islamabad, Rawalpindi, Karachi, Larkana, Nawabshah, Quetta, Zhob, Peshawar. In September 2016, a charity event was held in “Anjuman Faiz-ul-Islam” Orphanage, Rawalpindi on Eidul-Adha. Sacrificial animals were offered in Islamabad and Rawalpindi on the days of Eid-ulAdha for the residents of orphanages and other needy people.

In August, 2017, on the initiative of Mehriban Aliyeva, a charitable action was held in the National Institute for Special Education, Islamabad. the Heydar Aliyev Foundation gifted teaching accessories, e-tablets, and various toys to children with different abilities. It is clear that the social and humanitarian projects by Mehriban Aliyeva implemented in Pakistan are manifestations of her sincere attitude towards Pakistan.

Due to her activities and role in different spheres across the world, Mehriban Aliyeva was awarded Legion of Honour order of France, Honorary Diploma of the State of Kuwait, Hilal-e-Pakistan civilian award of Pakistan, Order of Merit of the Republic of Poland and Sretenjski Orden of Serbia.

Considering the facts mentioned above, it is seen that her appointment to the post of first vice president of Azerbaijan is not a coincidence. I am confident that Mehriban Aliyeva will continue implementing socio-humanitarian projects and benevolent actions in favour of humanity in the future ahead too.

Today on August 26 is Mrs. Mehriban Aliyeva’s birthday. She is indeed a philanthropist Muslim Lady who inspires so many men and women around the globe. On this significant day — on her birthday I wish her robust health, happiness and success in her noble activities.