In conversation with Teefa in Trouble director Ahsan Rahim 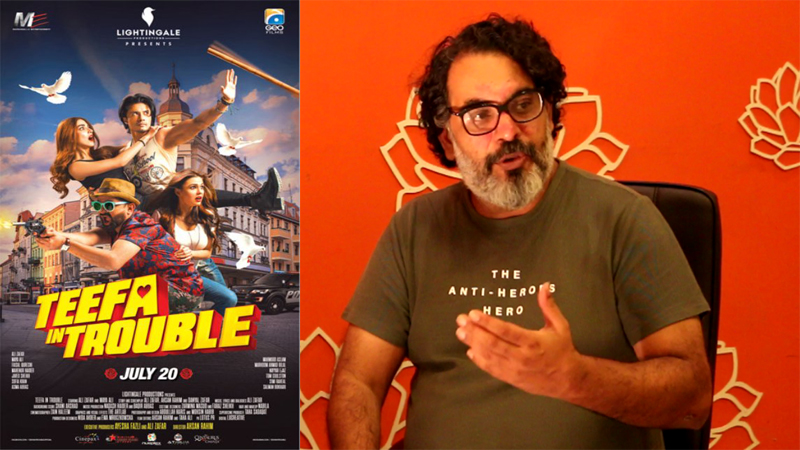 Teefa in Trouble will serve as the inception point of phase two of Pakistani cinema’s evolutionary and revivification process. It’s a new benchmark. It’s a movie that the industry aspired to keep it afloat, to keep the audience engaged, to establish the claim of its vivid existence.

Ahsan Rahim the director of Teefa in Trouble and his team have produced a movie that will steer the industry in a new dimension. It sets new goals for the upcoming movies in terms of script, action sequences and acting skills.

The stand out aspect of the movie is its well-crafted script; there are no dull moments, it’s evident that characters are defined after a due thought process. Ahsan Rahim, Ali Zafar and Danyal Zafar take the credit for such an engaging storyline.

The acting skills on display in the movie justify, compliment the script. The only on-screen exhibition of mediocrity is Ali Zafar; he fails to embrace the character.

Ahsan Rahim responds to some of the questions about Teefa in Trouble and Pakistan’s film industry.

I was asked the same question before too, and my reply was ‘why not Ali Zafar?’. First of all, he is a mega-star. Secondly, he is a fantastic actor. If there was any doubt about it before, there is not anymore. Ali was the perfect choice to play this character.

We spent around 2 months preparing the script. I, Ali Zafar and his brother Daniyal stayed at Ali’s house in a dedicated room to work on the script. We developed the storyline so that no last-minute changes are required on the set. By the time we started shooting, we had 12-13 revised draft of the script. We intended to finalise the script before shooting, there were no last-minute changes in the storyline. However, actors bring their bit of improvisation to the character and the scene that makes it all that more exciting. For example, Mehmood Aslam added so many small bits to the role of Butt Saab that elevated its appeal.

We wanted the jokes to be more universal rather than only understandable to a few. But, because Teefa and Butt Saab were from old Lahore, we had to have a Lahori tilt. And the best part is that wherever the film was screened, people enjoyed and understood the content.

For me, the script is the most important, because it is the foundation for any cinematic project. If the foundation is weak, there is no guarantee of success. Music provides the much-needed emotion to a film, but it is secondary. The script is primary.

It has been fantastic. I have been to screenings in multiple cinemas, and I have been really satisfied with the way the audience has reacted to the film. I see people enjoying, singing along and reacting naturally to various scenes, puns and songs.

Objective, to satisfy the audience or something else?

The first and foremost thing is that whatever one is trying to create is appealing to one’s own self. If one is not satisfied with their own work, they would not be able to satisfy the viewers. I am happy that Teefa In Trouble not only was a self-satisfactory project, it received outstanding reviews from the audience and critics. Of course, 100 percent is never possible, but we are happy.

The sole purpose behind Teefa’s release pre-Eid was its solo-screening. We worked out a plan and believe that releasing the film before Eid was the best time to achieve the desired output. Before on Eid days, there were only one or two films screened in cinemas, but now the numbers have doubled and we believe it was not the best idea to release it on Eid. If the film is good, it can do business on any given day.

The biggest challenge on set

We had envisioned a lot that we wanted to exhibit on the screen, but we were limited in implementation because of lack of infrastructure in Pakistan. We had a brilliant technical crew, which handles the audio, video and photography elements with great ability, but we lack facilities to carry out huge stunt scenes. Mehmood Shah was our stuntman who also played a role in the movie of Javed Sheikh’s bodyguard, he did a great job with the available resources.

The number of cinemas currently we have in Pakistan should increase three to four times in the coming years. Increase in cinemas can help us in producing better movies. It’s a cycle; audience participation, cinema revenue will lead to the building of better infrastructure.