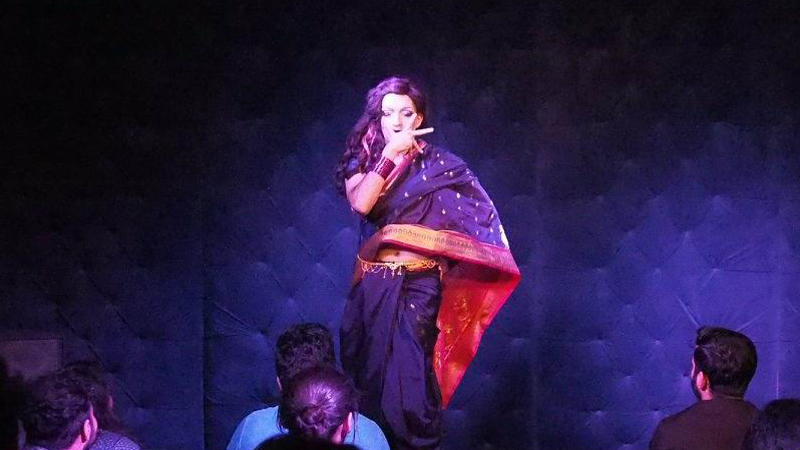 Chatni entered the room in purple Marathi sari and the song “Fevicol se” started blaring from the music system. Her dance moves were unabashedly sexual. The saree and the pallu only made the performance more sensual.

The audience was immediately in a trance. She seemed completely at ease with her dress, her purple extensions and the very high heels she was supporting.

Drag Queens are transgender or men who dress in flamboyant clothes and perform. They are a significant part of the western pop culture.

There were two drag queens performing and the very tall and dusky Chatni performed first. Anaya Sheikh, the shorter and fairer queen of the Auratnaak fame, joined her soon after. Eventually, the two shared the space and jokes.

Most of the performance was in Urdu with some Punjabi slang and profanities. Most of the skits were divided, had Indian songs and brief performances follow them.

The main theme of the whole show was sexual freedom and our hypocrisy around it.

P. Chatni, who later introduced herself as “Phudina”, was full of sexual jokes and innuendoes that gave the show a fresh start. Everyone was in stitches. Chatni confidently presented herself as a prostitute. And from then on, most of the jokes were about her and her experiences. She talks about her Marathi boyfriend in America and how he taught her to wear a Marathi Saris. “Marathis are like the Pathans of India,” she quipped. In another story, she said that one of her boyfriends had complained that she wasn’t tight enough and now no gynecologist in Lahore was helping her out with this problem. She also played the America-return card in the jokes and said she had returned because the Desi boys were raw and unshaved.

Anaya Shiekh was less explicit than her counterpart and said she didn’t have the option of returning to America.

Most of her jokes were about her experience as a transgender woman in Pakistan. She talked about her transition at the age of 23 from a man to a trans woman. The kind of frank questions she has to face about her genitals, fertility, and relationships. She also repeatedly talked about “growing breasts” and how painful they were to grow.

The performers, in this case, the drag queens, gave a sneak peek into the (sex) life of transgender and homosexuals. The jokes were mostly about the sexual attitudes these two confront in this society.

Both the performers were a vision. Chatni, at the end of the show, changed into a yellow suit while Anaya donned a long embroidered skirt with a maroon blouse.

The duo also asked the crowd questions, walked to them and waited for their response. Sometimes when the question was too bold and the crowd remained silent – they encouraged people to yell. 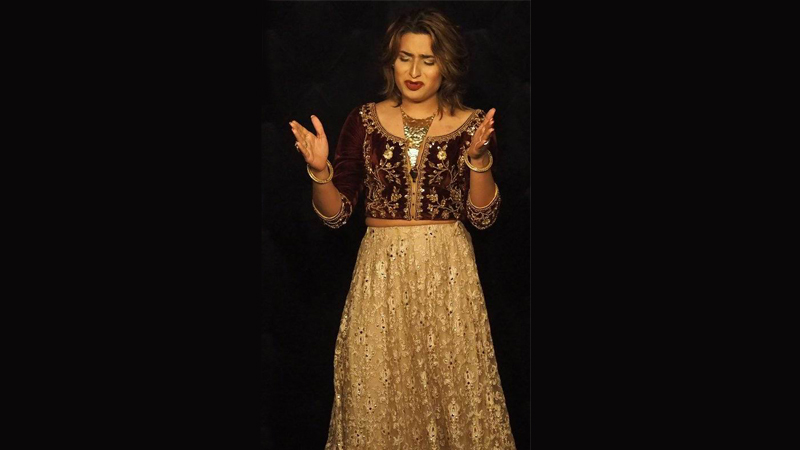 The house was full of mostly young people. Hardly anyone looked beyond their twenties. The event was strictly 18+ and no one was allowed without verification.

Many people were asked about the performance later and they gave positive reviews.

This performance and the cheerful response to it is a testament to the fact that the younger Pakistanis, particularly in the urban and educated pockets, have a very different (perhaps even western) attitude to sex. The show was sold out swiftly and many people were left disappointed. This proves that stand up comedies are a new rage and there is a need for more such shows. After all, who doesn’t want a good laugh and that too on the weekend? One felt cheery and emancipated after the one hour spent listening to these queens.

There is a demand for not just many such performances but also for bigger venues to organize them in. Obviously, most of us would worry about the security and wonder how soon it would draw the ire of religious lobbies.