Nuclear crisis management folk may ponder the advice given by the 66th United States Secretary of State, Condolezza Rice, to India and Pakistan when trying to avert a nuclear crisis during the 2001-2002 military Standoff, “acknowledge the right of others to do what we had done in responding to the attacks on the twin towers (using military force) but also to convince them not to actually do it.” It’s a good line with a touch of gravitas – and when confronting the escalating nuclear crisis between India and Pakistan – it excuses the U.S for wading into Afghanistan after 9/11; forgives deadline-induced diplomatic talks, perspective and a balance of military powers required to prevent nuclear rivals going to war. 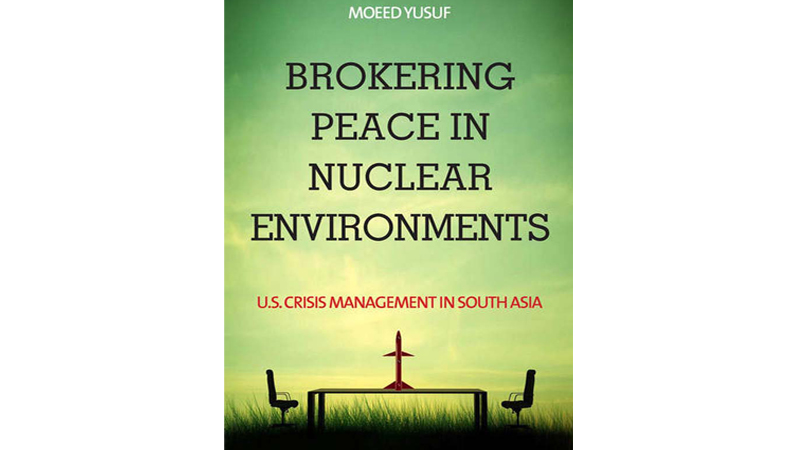 The line, used in Moeed Yusuf’s new book, Brokering Peace in Nuclear Environments, an original historical account of the diplomatic dialogue used by the U.S with Pakistan and India to avert a nuclear crisis. The account is a complicated tale of counter-insurgency, high politics, military standoffs and duplicity. Played out between the regional rivals India and Pakistan.

Yusuf, an expert on U.S. policy towards South Asia, is a deft guide through a maze and carefully structured account of a modern-day “Great Game” played out since the nascent powers first tested their nuclear weapons in 1988. A year after which, bickering between them over disputed territory in Kashmir sent a shock wave through the Western world still convalescing from the Cold War.

His range of sources is stunning. Footnotes reference interviews with U.S., Pakistan and Indian officials, as well as documents. Highly sensitive conversations are reported to add a rich context to the 300 page account.

Pakistan’s nuclear weapons are seen by the Western World as just as perilous as Pyongang and Tehran’s. Devised before Iran and North Korea, they remain a huge concern to the West. Pakistan’s chief nuclear scientist A.Q. Khan reportedly provided invaluable assistance to galvanize both Tehran and Pyongyang‘s nuclear programme – and there were some suspicions Pakistani scientists assisted the Afghan Taliban and Al- Qaida.

Yusuf reflects on India and Pakistan’s complex military operations, political stance and the Kashmir conflict. From the Kargil crisis, to the 2001- 2002 military standoff and the Mumbai crisis, he details the crucial role taken by the U.S. as third-party meditators to step in, lead and “crisis -manage the situation.”

It is riveting to read a book by a writer that includes all the masterful trickery that encompasses the rules of diplomacy. A detailed account of how the U.S. averted a nuclear crisis between Pakistan and India; using clever diplomacy, manipulation and strategy to contain the increasingly fraught tensions expounded from both countries during the conflicts. The U.S. commitment to resolving the three crisis is commendable: it included abandoning their own foreign policy objectives post 9/11 in Afghanistan; thus, acting as an imperative conduit, that without intervention would have seen the crisis deteriorate and an alternative history written.

Heading international efforts to manage the 2001 – 2002 Military standoff, quoting the 65th United States Secretary of State, Colin Powell, hinting at the mood of the international community when managing the crisis – Powell describes a duty roster “for who is going tomorrow to keep these clowns from killing each other.” The U.S. and the U.K had devised a roster, that in the event of crisis escalation, a high-ranking U.S., or British official could be deployed to the region at short notice.

Conversely “Despite the mischief perceived by each side behind their mutual woes,” both countries continued to respond to messaging delivered by the U.S. – Yusuf describes the unhealthy dependency developed on the U.S. by both countries to resolve tensions, “India knew it had shifted the onus on extracting tangible results from Pakistan to Washington,” Yusuf writes.

This “shift” to the U.S., Yusuf asserts, has stymied “dispute resolution” between India and Pakistan who remain uncommitted to resolve the two major issues of contention – terrorism and Kashmir – both conflicts he predicts, will eventually escalate into another nuclear crisis – “with every future conflict threatening a more complicated crisis to manage.”

Moreover, “Pakistan has faired badly when you reflect on history,” looking back at the decades-old conflicts – unlike “India that has gained international support and sympathy.” Yusuf argues there is little incentive now for India to dedicate themselves to conflict resolution, “we are more likely to see a more aggressive military strategy,” He argues.

Although, the book asserts the Western assessment of a nuclear crisis: as an exaggerated threat, manifesting from baggage carried over by the Cold War; the account failed to address the genuine trepidation felt by Western powers; that the region remained a crisis away from blundering into an accidental war that could escalate into an international nuclear crisis. Richard Armitage is quoted as saying during the 2001-2002 standoff, “the international community was frightened to death that we were on the verge of nuclear war.”

Consequently, Yusuf argues that if Pakistan wants to evolve from history, it must take responsibility for its role, not blame other entities – but seek solutions to conflicts that will aid its progression into a credible regional power. The book is essential reading for young Pakistani scholars who want to shape the future international narrative of their country.

Yusuf’s account transcends the bickering and recriminations of the South Asian rivals to provide a refreshing strategic approach to conflict resolution. This book is an absolute must-read for all policy makers managing nuclear crises that hope to make a mark on conflict management strategies for their country.