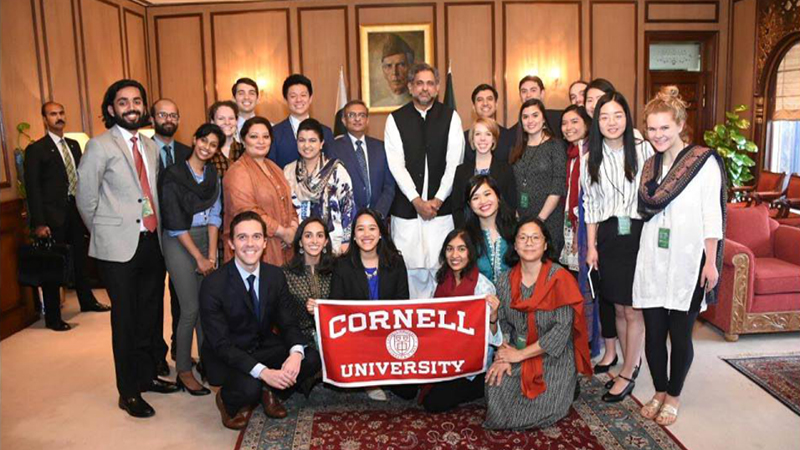 Most foreigners tend to imagine Pakistan as home to unfriendly, conservative people, a monolithic, insular culture, and to some of the most dangerous radical outfits of this world. But two Pakistani students at Cornell University, USA—Mohammad Zohair Javed and Shan Ahmed attempted to bust the myths about Pakistan by organising a trip to the country for their peers at Cornell.

The trip itself involved around 18 students from Cornell — bone of the most prestigious universities in the world—and who hailed from different backgrounds. Govinda Hancock, for instance, is an Australian American who wished to visit Pakistan to “better understand this important Muslim majority Nation.”

Arturo Castellanos, a Mexican student studying law at Cornell, meanwhile, describes Pakistan as the “most stimulating and magical country” he has ever visited. Prior to this trip, he held the same view of Pakistan that the Western media so unabashedly disseminates.

Emily Liao, an American citizen and an MBA student at Cornell, vividly describes her time spent in Lahore. She says, “We rode wildly colourful tourist bikes within the Walled City of Lahore, stopped to watch mud wrestling, and tried to hold our dancing bones back while listening to the drumming of the dhol.”

Shan Ahmed and Zohair Javed, thus, deserve immense plaudits for organising a trip that showcased not only Pakistan’s cultural diversity and natural beauty, but also the daily struggles of the common people. One of the first stops in the trip, for instance, was to a village on the outskirts of Lahore where our guests were “introduced to people from a rural background so they do not just get to see urban Pakistan, but also meet people in a rural setting,” as Zohair Javed said.

The participants landed in Lahore on the 30th of May of this year, with their visits beginning the following day. Their first visit was to the acclaimed Lahore Museum, where they witnessed the history that has shaped this part of the world. The Museum trip was followed by the inimitable experience of Wagah’s flag lowering ceremony—where our guests witnessed first-hand the intense patriotism that has come to define our country.

Other activities the group covered in Lahore included a visit to Lahore’s Old City including the Lahore Fort and the Badshahi Mosque, as well as visits to the National College of Arts (NCA) and to the Lahore University of Management Sciences (LUMS). Our guests also had a chance to have dinner in Lahore’s acclaimed Food Street, thus witnessing the culture, history and the vibrant culinary tradition of this unique city.

Emily Liao, an American citizen and an MBA student at Cornell, vividly describes her time spent in Lahore. She says, “We rode wildly colourful tourist bikes within the Walled City of Lahore, stopped to watch mud wrestling, and tried to hold our dancing bones back while listening to the drumming of the dhol.”

Emily’s eloquent description, in fact, perfectly captures the multitude of emotions one goes through as one experiences Lahore. In the midst of this euphoria, moreover, the students remember the hospitality and the love they received from the common Pakistani.

Priscilla Lee, for instance, remembers her interaction with Pakistanis in the following way, “I so appreciated the simple but warm social interactions I experienced—we met many friendly people along the way.”

The group then drove to Islamabad on the 3rd of April, where they met Ali Jahangir Siddiqui, Pakistan’s Ambassador to the United States, and a fellow Cornell Alum. Zohair and Shan, in fact, would like to thank Mr. Siddiqui for helping organise the entire trip. The participants also met former Prime Minister Shahid Khaqan Abbasi and held a very frank question answer session with him. Our Mexican friend, Arturo, reminisces about these interactions and claims he could “feel the power of change in Islamabad.”

Brian Guo, a business student at Cornell also highlighted his time in Islamabad and said, “Some of the organised meetings with the Prime Minister, Chief of Army Staff, Ambassador Designate to the US (a Cornell Alum), the lead activist for civil rights, Mohammad Jibran Nasir, and Babar Ali, the business mogul that developed and grew the private sector, definitely provided memorable experiences.”

The group then headed to Hunza on the 4th of April, possibly beginning the most breath-taking part of their tour. In Hunza, they visited the historic Baltit and Altit Forts and also visited Ciqam, a skill development centre that trains women in carpentry and masonry. The students thus witnessed not only Pakistan’s natural beauty but also became acquainted with the region’s local economy. 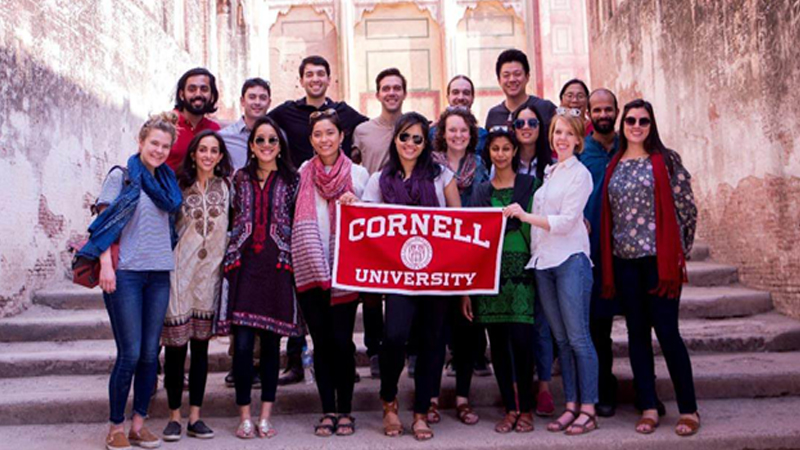 Their tour then took them to a visit to the famous Attabad lake on the 5th of April, along with a visit to the country’s iconic Passu Cones. Sharlene Castle, another participant, said about the trip to Hunza, “visiting Hunza was incredible. I didn’t know that Pakistan had such beautiful, varied, scenery and getting to see that part of the country was lovely.” Sarah Cartagena, meanwhile, perfectly described Hunza when she said, “I have never seen such an incredible landscape as I did in Hunza. It was as if [it was] photo-shopped to perfection.”

Our guests then returned to Islamabad on the 6th of April, and headed straight for Remount Depot, Mona, where they witnessed a special polo match that had been arranged for them. They then visited the Director General, Inter-Services Public Relations and the Chief of Army Staff, General Qamar Bajwa in the General Headquarters, Rawalpindi on the 7th of April.

The students remember their interaction with the top brass of the army as highly comfortable, informal and enlightening. Both the COAS and the DG ISPR answered the students’ questions and dispelled many of the suspicions they harboured of Pakistan’s military.

The participants then capped of this fascinating tour with a visit to Faisal Mosque and with a dinner in Monal, and then flew back to New York City on the 8th of April, with their lives and perceptions of Pakistan forever changed.

As Brian Guo said, “My view of Pakistan is definitely one of positivity now,” while Emily Liao claimed, “I’m not sure what Americans think when they think of Pakistan, but I don’t think hospitality tops the list of a blanket perception. I think there was something innocent and lovely that permeates the country, and I was surprised by how excited people were to simply have us visit.”