PTI leads in all three constituencies of Islamabad

* Imran Khan leads the race from NA-53, Asad Umar from NA-54 g Early morning voters were the most enthusiastic, queuing up even before 8am, however as the day progressed, the turnout became slow, owing to the hot weather conditions 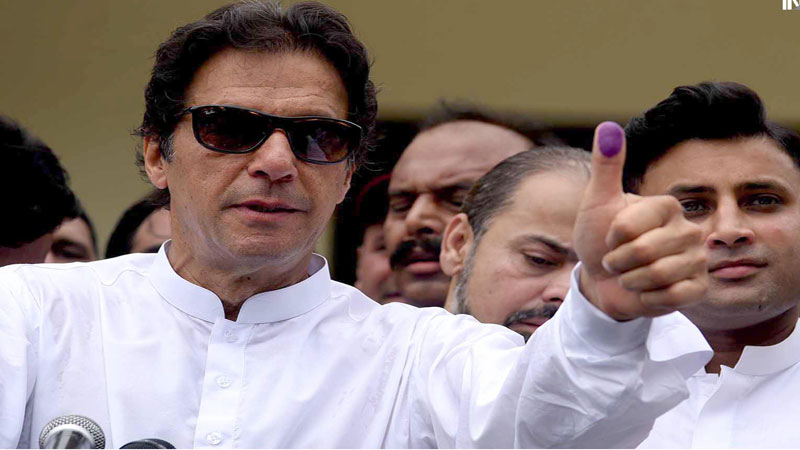 ISLAMABAD: From NA-53, former PM Shahid Khaqan Abbasi and PTI Chairman Imran Khan are the bigwigs but according to the latest results, Imran Khan is leading the race.

According to unofficial results, PTI is leading while PML-N lags behind in all three constituencies of Islamabad. PTI candidates Raja Khurram Nawaz and Asad Umar have taken a lead in NA 52 and 54 respectively.

In their excitement and eagerness to cast vote, many people started showing up at polling stations even before the set time of 8am.

Children, women, men and people with disabilities held flags and posters of the parties they were supporting and stood in front of their polling stations where the workers of various political outlets had also established their camps.

One noticeable thing was that Pakistan People’s Party camp was absent. The early morning turnout saw a lot of enthusiastic voters but as the day progressed, less and less voters showed up. After 4pm, there were more female voters than male. More than 200 female voters who had arrived late, waited outside the polling stations but couldn’t cast their vote due to limitation of time.

According to an official of the Election Commission of Pakistan, the turnout at NA-53 was 45 percent to 52 percent.

Karishma Mahboob, who had travelled all the way from the United States to Pakistan, just a day ago, couldn’t cast her vote due to absence of a Pakistani CNIC.

Other than Karishma Mahboob, 25 families had flown all the way from Saudi Arabia, United Kingdom, United Arab Emirates and the US, with most of them in favour of Pakistan Tehreek-i-Insaf (PTI). 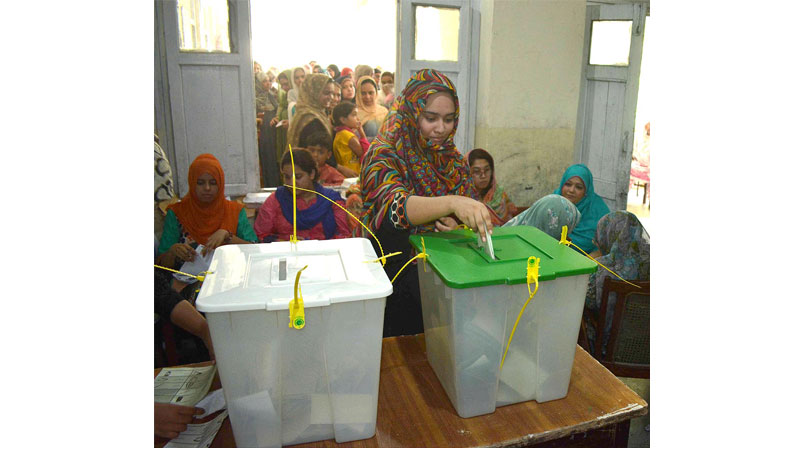 The security officials on the ground performed their duties flawlessly, also helping out elderly and disabled people to cast their vote without any difficulty.

One shocking aspect of the election was the most of the minorities were not even listed in the booths and many had to return home, for instance Zare Masih, a Christian, arrived at her designated polling station but couldn’t cast her vote due to lack of record in the documents.

On ground, the PTI camp was more active than the PMLN one whereas Tehreek-i-Labbaik Pakistan (TLP) and Allah-o-Akbar Movement camps remained silent and even closed their camps and returned home soon after the polling stations shut down.

An 80-year-old woman, Shahla Awan, who had come all the way from Abbottabad to cast her vote, along with her family, voted for PMLN while her two daughters voted for PTI. She added that her daughters were forcing her to vote for PTI but “I will vote for PMLN as former prime minister Nawaz Sharif has been the only leader of Pakistan that helped the country to move forward towards development.

The polling on NA-53 remained successfully peaceful as the voters lauded the friendly behavior by the police officials. Businessmen who had come out to vote, while talking exclusively to Daily Times, informed that they were voting for PMLN.

A local resident, Talha, also while talking exclusively to Daily Times, said that in the last two elections, he had voted for PMLN, but this time he was supporting TLP.

“I believe Nawaz is a great leader but he recruited Ahmadis in his official staff and also challenged the oath of the finality of the prophet,” he said.

As for the results, internal rifts among PML-N have benefited mainly two political parties’ contenders PTI and Mutahida Majlis-e-Amal (MMA) in the constituency.

A polling station near eastern bypass in Quetta in first half of the day can be termed as another reason for the unimpressive turnout. According to reports, at least 30 people, including six policemen and two children, lost their lives. The incident created atmosphere of fear and panic among the people.

The PML-N fielded its candidate Anjum Aqeel Khan in NA-54 while Asad Umar contested on the PTI panel in this constituency. Mian Aslam was from MMA while Ismat Shah Jahan was on the panel of Awami Workers Party (AWP).

The AWP represents the left and remains the only party that gave a clear plan on women empowerment and other pressing issues throughout its election campaign as well as its official election manifesto. However, most part of this constituency falls in rural areas of the ICT and therefore little presence of AWP supporters was observed on the surveyed polling stations.

According to sources, PML-N faced internal conflicts in this constituency after the ticket was awarded to Anjum Aqeel Khan. Some key supporters of the party switched their loyalties after the decision. An estranged leader of PML-N Hafeezur Rahman Teepu, who was chairman UC Budhal, is no more with the party now which created a huge loss for the party as he has a large number of vote bank in the village area while the most part of the constituency has been put in this after recent delimitation by ECP. Hafeezur Rahman Teepu who was contesting independently has been backed by main traders’ circles of the ICT while his decision only shortened the votes of PML-N.

Unlike some conservative village areas of the country, there was significant number of women also come out to cast their right to vote.

According to a letter written by Umar, to Islamabad’s District Returning Officer on Monday, 13 polling stations falling in NA-54 were considered highly sensitive. Some of these stations are of Mera Sumbal Jaffer, Badhana Kalan, Tarnol, Shah Allah Ditta, Golra and Sanjgani.

According to the ECP, out of 786 polling stations of the federal capital, 26 were declared highly sensitive, 87 sensitive and 673 normal. The polling ended at 6pm and fortunately no untoward incident was witnessed.