Bilawal Bhutto — the leader among politicians

By his less than a month long electioneering, young Bilawal Bhutto has turned out to be the most experienced and mature politician of them all 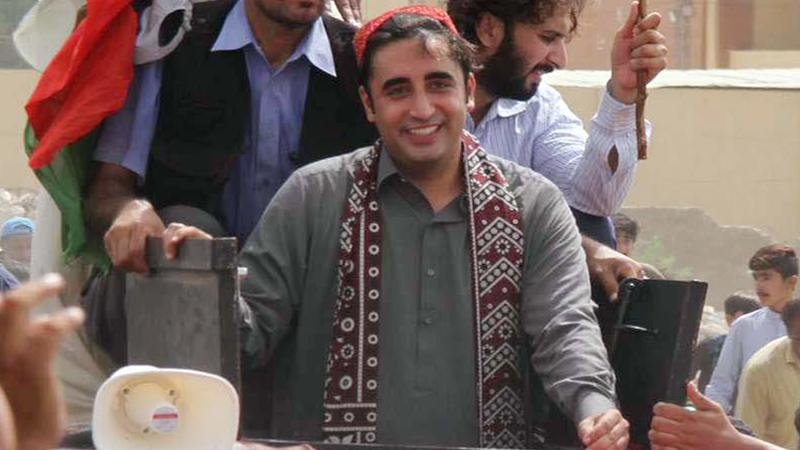 Nawabzadah Nasrullah, one of the last vestiges of our lost civilised culture of politics, and famous for his penchant for Urdu poetry and witty remarks, was once vying to coble a political alliance against the then government.

With Turkish cap perched on his head and hukkah simmering before him, he was sitting with Shujaat Hussain when he was asked “politics remained your cup of tea before and after partition. What difference do you feel in the then politics and politics now?”

The elderly Nawabzadah jerked pipe of the hukkah, took a long sigh and lamented, “that time I used to sit with political stalwarts like Nehru, Abul Kalam Azaad, Mohammad Ali Jinnah, Attaullah Shah Bukhari, Mahatmah Gandhi and their likes and now I am sitting with these jugglers.”

I think the same miserable episode of decadence encounters our generation.

My late father used to tell me about his long journeys to attend political jalsas and rallies right from Balakot to Rawalpindi and Lahore. In astonishment, I used to ask why would he make such a tiring journey just to listen to abusive language, character assassination of the opponents and stinking jugglery.

He used to reply, “things were different at that time as we were not lucky enough to go to universities to learn enough politics and rights. Whatever I learnt about politics, constitution, fundamental rights, I learnt through these jalsas.” He used to fondly remember and exactly quote excerpts from ZAB’s speeches.

Nowadays, the self-proclaimed ‘leaders’ and saviours of the down-trodden use such foul language in their speeches that PEMRA and Election Commission have to ban them. Resultantly, the threads of respect, civic sense, sobriety, culture, etiquette and civilisation have worn out from our social fabric.

However, in this politically abusive gala, one shrilled voice beats the tympanic membrane of my ear. Neither character assassination, nor abusive language, nor false accusation, nor political buffoonery, nor hollow rhetoric. A very composed, confident, persuasive and politically canvassing voice of PPP Chairman Bilawal Bhutto.

Many analysts used to say that Bilawal was not politically mature.

“He is too young to comprehend the complexities of Pakistani politics. He can’t stand the sizzling heat of July and August as he is used to comfort and cozy weather of London. He has been brought up in palaces, how can he peep into thatched mud houses in the nook and corner of country?” some would say.

While others would claim: “He is a pampered child, how can you expect political shrewdness and politically incisive cognitive abilities from him? He is not a Bhutto. He is not a good orator. He is just a puppet and a poster boy as his strings are being pulled by ‘corrupt Zardari’.”

The PPP Chairman has proved them all wrong. In the topsy-turvy political landscape of Pakistan, Bilawal drew attention when he interacted with international media at Davos and HardTalk at BBC.

Bilawal revived the reminiscence of ZAB speaking at security council meeting in 70s; confident, composed, full command over diplomacy and language, starring into the eyes of addressees and delivering his message without any murmur and spooning.

Having seen Nawaz Sharif fumbling papers in his hands and Imran Khan stammering while giving nonsensical answers to the HardTalk anchor’s pointed questions, Bilawal’s political maturity was a refreshing change.

The nation saw partially fledged Bilawal leaving his nest and out-flying his over-fledged political rivals. By his less than a month long electioneering, young Bilawal Bhutto has turned out to be the most experienced and mature politician of them all.

He has got guts to call a spade a spade while addressing the issues of Talibanisation, stands on the right side of history while taking on the establishment, takes sides with the oppressed while discussing religious persecution, holds out her mother’s illustrious life while encouraging women to play their due role in society and remains articulate on the mark with well calculated and thought out words while responding to the pinching questions of the journalists.

The Bilawal who roars like a lion while promising to carry his mother’s legacy on is seen sobbing while offering fateha at Bilour House in Peshawar and Sarawan House inQuetta.

The fledgling Bilawal, in the political aviary, sprinkled splashes of shame on all hooters when on the incidents of shahadat of Haroon Bilour and Siraj Raisani, he declined to make any political statements.

On this occasion his words were, “you may put political questions to me on other occasions because I cant I cant sloganeer while standing on the graves of my illustrious countrymen.”

It was a tight slap to all so called propagandists in the garb of analysts and his political opponents. His composure, maturity and empathetic heart reverberates in every inquisitive mind that Bhuttos need not be apprentice for politics and sacrifices.