After ten successful years as Pakistan’s most popular music program and franchise, Coke Studio will be introducing a new web-based module, Coke Studio Explorer, in the first week of July. In an exclusive interview for the Daily Times, Ali Hamza and Zohaib Kazi, the producers of season 11 of the series and the new module, talk to Ally Adnan about the concept, content, goals, and making of Coke Studio Explorer.

A module named ‘Coke Studio Explorer’ is being introduced with Season 11 of the show. What is it about?

Ali Hamza: Coke Studio Explorer takes Coke Studio to different parts of Pakistan and uses music to explore the diverse cultures, locales, traditions, and values of the country and celebrate the spirit of its people. The program is centered around a number of amazingly talented and driven musicians whose songs will do Pakistan proud and help put the unique music of the country out on the international landscape.

Zohaib Kazi: After ten years, we felt that Coke Studio needed to innovate and search for talent wider and deeper than it had in the past. As producers, that is what we tried to do with Coke Studio Explorer. More importantly, we tried to construct a module that will bring people together. We are in an election year and the political climate of the country is both charged and polarised. We hope that Coke Studio Explorer will help add some love and amity to the atmosphere and bring people together, using the tremendous power of music.

In order to properly document the music of Pakistan, we developed a mobile music recording system for Coke Studio Explorer and traveled all over the country to record musicians live and in their indigenous settings. We added additional tracks and did the mixing in our studios but the primary tracks were the ones recorded in the field. It can be said that Coke Studio Explorer packages and presents authentic folk stories in a modern and urbanised manner.

The concept of Coke Studio Explorer appears to be very similar to that of Zohaib Kazi’s seminal series Fanoos. How are the two different?

Zohaib Kazi: In Fanoos, we limited ourselves to recording musicians on location. We do much more in Coke Studio Explorer by highlighting the culture, stories and ethos behind the music. After presenting the musicians in their home locations, we bring them to our studios and record them in the traditional style of Coke Studio, as well. I think people will enjoy listening to the musicians perform in two very different settings.

What musicians are featured in Coke Studio Explorer?

Ali Hamza: The program features five (5) sets musicians, each one from a different region.

The first one is a duo of Kalash girls, Ariana and Amrina, from the Chitral district of Khyber-Pakhtunkhwa. They sing native folk songs but have been exposed to and appreciate popular international music. Their act is very charming. We have Vishnu and Shamu Bai, two musicians from Dewan Lal Chand in Sindh, who sing devotional songs, known as bhajans, that they learnt from their father. Their singing is unique and very powerful.

Zohaib Kazi: Three Baluchi musicians, Darehan, Shayan and Mangal, present throat singing in the unique music known as Nur Sur. These songs are traditionally performed at festive occasions and deal with themes of love, longing and separation. Their music is as powerful as the Tuvan singing of Mongolian monks. Qasamir, a band of four musicians from Kashmir, performs surreal songs dealing with love, beauty and harmony in Coke Studio Explorer. A lot of people talk about their love for Kashmir and its cause but few have heard the language of the region. The program will change that in its own small way. We have tried to capture the true essence of the language by recording the poetry of famed Kashmiri poet, Peerzada Ghulam Ahmad Mahjoor, in his homeland. We are confident that people will love the sound of the Kashmiri songs. The fifth performer is the Pakistani-Canadian Mishal Khawaja, whom we found on Instagram. She has a unique, refreshing take on urban music and sings with a lot of passion. Her act is likely to win a lot of praise and accolades.

The music in Coke Studio Explorer was recorded live on location and the addition of supplemental tracks, sound engineering and mixing were done in the studios. Did the original musicians participate in the work that was done after the original recordings?

Ali Hamza: No, they did not.

Zohaib Kazi: We are holding our breath to see their reaction to the final recorded tracks.

How were musicians selected for Coke Studio Explorer?

Ali Hamza: We established the criteria for selection before embarking on our search for musicians. The musicians had to be relatively unknown. They had to represent a unique aspect of the culture, history and spirit of Pakistan. And, they had to be talented. The selections were made in the field – in a natural, freewheeling and largely unrestrained manner – using the criteria that had been established in the beginning.

Zohaib Kazi: The search for musicians was both extensive and expansive. It covered the remote mountains of Kalash, the scenic valley of Muzaffarabad, the vast landscape of Baluchistan, and the deserts of Sindh not mention the the infinite virtual terrain of the internet. A lot of time, effort and energy went into the search which was, fortunately, both productive and rewarding. We are very pleased with the results. 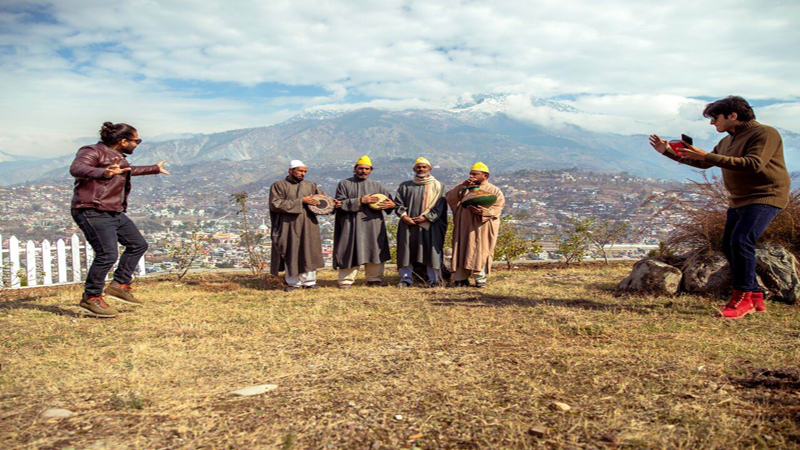 What challenges did you face while working on Coke Studio Explorer?

Ali Hamza: We travelled far and wide in our search for musicians and dealt with a lot of the challenges associated with the adventure of travel in unchartered territories. These included dealing with long rides, lack of reliable cellular service, freezing temperatures, poor sanitation facilities, and the absence of proper accommodations but the whole process was a lot of fun. We really did not let the challenges faze us.

Zohaib Kazi: Unlike Coke Studio, the program was recorded in the field. It was not easy to work in an uncontrolled, mostly outdoor environment. We had to often record amidst the sound of children, farm animals, tractors, the environment, and a lot else. We had to work with people whose language we did not always understand. And, we had to deal with unexpected problems like loss of power, internet and light. Yet, the time that we spent out of the studios was very enjoyable. We loved having to think on our feet and addressing problems with ingenuity, spontaneity and inventiveness.

What pleasures did the making of Coke Studio Explorer afford the two of you?

Ali Hamza: Traveling and exploring Pakistan was a pleasure. It helped me think out of the box and got my creative juices flowing.

Zohaib Kazi: I loved meeting people from remote areas of Pakistan and hearing their stories. Visiting Kashmir and experiencing the unique beauty of the region and its people was a genuine pleasure. I enjoyed getting to learn the story of Kalash first hand and meeting the Dards. They are truly remarkable people with a fascinating history. I also felt a sense of accomplishment after recording Nur Sur in Baluchistan. I do not believe that it has been done professionally in the past.

The two of you are well-known musicians who have been involved with Coke Studio in the past. How did your training, knowledge and experience help in the making of Coke Studio Explorer?

Ali Hamza: I have worked with Coke Studio in the past but mostly as a musician whereas Zohaib was a member of the production team.

The experience afforded me an understanding of the making of the program and, possibly, made things a little easier than they would have been if I was totally new to the show. The truth, however, is that both Zohaib and I are driven by our love for the music, culture and people of Pakistan. If the program is successful – and we sincerely hope that it is – it will be mostly because of that love and not really because of our training, knowledge and experience as musicians.

Zohaib Kazi: Our individual understanding of music is very different from one other. We appreciate and approach music differently, and, our skills sets are complementary. As a result, we were able to make different, but equally valuable, contributions to the making of Coke Studio and Coke Studio Explorer. I believe that the program benefitted from the union of our diverse and, if you will, completory skills and abilities.

How did you divide the tasks and responsibilities of producing Coke Studio Explorer divide amongst yourselves?

Ali Hamza: We did not divide tasks and responsibilities between ourselves. Instead, we worked together as a team and supported each other’s vision and ideas.

Zohaib Kazi: There really wasn’t a formal division of work between the two of us. We did most of the work together and, even when working alone, consulted with the other.

Coke Studio Explorer will be a web-based program. Why is it not being aired on television channels?

Ali Hamza: Coke Studio Explorer will debut on the web but may be shown on television at a later stage.

Zohaib Kazi: A final decision has not been made in this regard. The program will be aired on television if that would help the program achieve its goals.

What are the strengths and unique features of Coke Studio Explorer?

Ali Hamza: Coke Studio Explorer is a veritable celebration of the diversity of the talent, culture and geography of Pakistan.

Zohaib Kazi: The talent pool, the human stories and the diversity.

Do you feel that Coke Studio Explorer will be as popular as the regular program?

Ali Hamza: Yes, I do. The program will entertain and educate. It will instill a sense pride amongst viewers and give them a positive sense of identity. I am hopeful that it will help develop a favorable international narrative and image for our country.

Zohaib Kazi: I believe that the stories that we tell in Coke Studio Explorer are its greatest strength. I think they will strike a chord with viewers and make the module as popular as the regular program.

How does it feel to be a few days away from the release of a new – and untested – module of an immensely successful program?

Ali Hamza: We are happy and excited that the new module will be released soon but our work is far from done. There is a whole season of the regular program left to wrap up and, hopefully, another one to plan!

Zohaib Kazi: Coke Studio is an immensely popular series and producing the show, along with a completely new module, came with a lot of responsibility. People have very high expectations of the show. We hope that the programs we have produced will live up to the expectations. We are waiting for the verdict of the viewers.