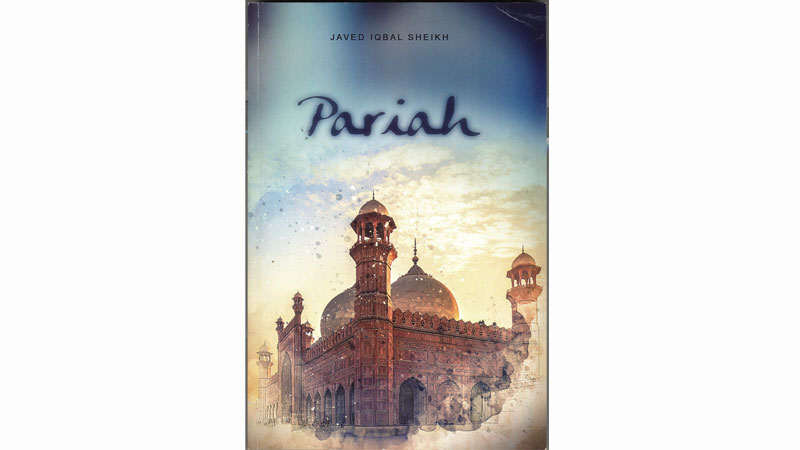 ‘Pariah’ is a short story of the mini storms that struck Pakistan and left an impact on the history, culture, society and the people. It is written by Javed Iqbal Sheikh. The author is serving member of District Judiciary of Punjab, Pakistan having experience of six years practice as an advocate. This book is first ever published work of the author printed in Pennsylvania USA by Dorrance Publishing.

The novel will take you into the eras of 1970s till late 1980s, from the separation of East and West Pakistan, rule of Zulfiqar Ali Bhutto and to the regime of Military Dictator Zia Ul Haq. The advocates of martial-laws might disagree with some parts of this book, but even they would find it difficult to deny it. Despite the sentimentality of the subject, the flow of book is not melancholic, it is written in flowery and rich literary language and the novel speaks of the mountains, fields, flowers, doves and pigeons.

You will be carried away and gradually lost into the lovely bonding of the father and son, and then subtly experience the changing political scenario of the country

The protagonist of the novel is Zikarya, a small contractor and labourer who traveled to different northern and hilly areas of Pakistan. His wife has passed away and lives with his fourteen year old son and nephew who is also an orphan. Pariah reflects the love between Zikarya (father) and Aon (son) along with their affiliation with a leader who gave hope to all classes of society for a good life and a prospering future. Thus the novel has two folds of the father son love and sentiments attached with the leader.

Then are the chapters where the political reigns of first elected Prime Minister of Pakistan Zulfiqar Ali Bhutto and the Military Dictator Zia Ul Haq are penned down and through Zikarya and Aon the author effectively sketches the feelings of the common men and their love for Bhutto. Trust me you will be carried away and lost into the lovely bonding of the father and son and will subtly experience the changing political scenario of the country. The novel explains the reactions of war of 1971 and how it was telecasted on radios and on TV for the public. The novel also outlines the outrage of the people living in developed cities and slums towards the untimely political murder of Zulfiqar Ali Bhutto. Well, I haven’t seen those eras but by reading this novel I could get familiar with the fan following of the leader Zulfiqar Ali Bhutto really was. This book allows us to get into the details of how the social values from a modern living style turned conservative. The heart touching point in the book is about how brutally Bhutto was treated in the prison cell, how he was taken to be hanged and what were the reactions of the general public over that.

I think we need to read this book to know the political facts of the country and decide on our own that how martial law and dictatorship ruined the prospering country. What were the reactions of the masses on the hanging of Bhutto and why it was called a political murder? You will find all aspects in this one novel which I highly recommend you to read. At present on the death anniversaries of Bhutto or Zia we see many TV channels debating over their fatality but none of them discusses the impact of those eras on the history, culture and society. I think it’s a good read for eager readers of literature and fiction.

The author states, “An active volcano has its own periods of dormancy and eruptions –beyond the control of its victims. The tyrant’s rule supposedly ended after the death of the military ruler in 1988 but the people are still trying to find the ways to explain his impact on the culture and history of the nation. Despite the enormity of the loss of a generation, this is a country that still advocates a manipulator of the worst kind. Like an epic poem, Pariah preaches love for humanity and God. It is a depiction of love bond within blood and beyond. It is a reflection on friendship and the story of an era and how a nation keeps on living”.

Voltaire, a French enlightenment writer, historian and philosopher, said, “History should be written by a philosopher”. I agree with this statement as the history written by the historians under the kind auspices of the rulers is always wrong, it does not include the sentiments of the masses especially the common men who associate themselves with the characters and their valued promises. History needs to be written from the people’s’ point of views too and this is what Javed Iqbal Sheikh has done in his novel ‘Pariah’.