Being a woman in Pakistan is not easy 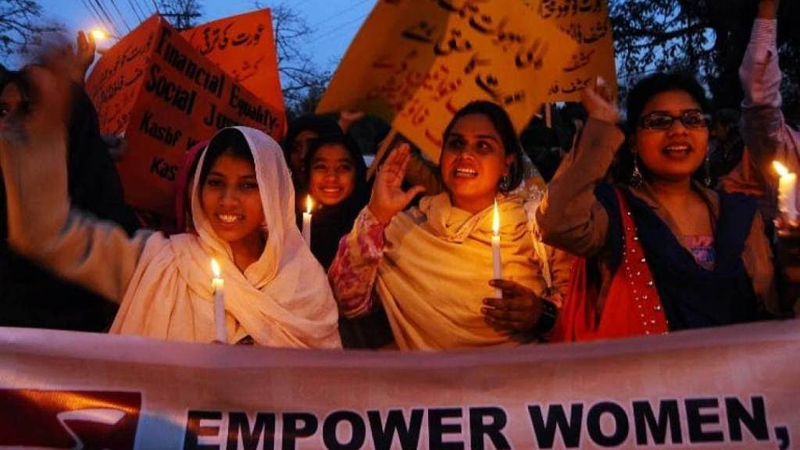 We have been taught and told many times that in the pre-Islamic Arabia, girls were not wanted as a child. They practiced a shocking custom of burying a female child alive. It was with the advent of Islam that Arab as well as other women were liberated. They were recognised and treated as equals and they had rights. And the birth of a daughter was celebrated as much as that of a son.

Then what is it that I see in our society? In the past year, more than 300 babies have been found dead in garbage heaps in Karachi, with 99 per cent of them found to be girls. A four-day-old was found dead with her throat slit. Another newborn was left on the steps of a mosque to be stoned to death when a cleric assumed it was an ‘illegitimate baby’.

If a woman in Pakistan survives at birth, for many do and thus making up half of the population, she battles many attempts which threaten to take away her life. She may be made to suffocate under age old traditions by being denied the right to education

Two conflicting details, both disturbing at the same time, emerge from these facts. In almost all the cases where newborn babies were dumped heartlessly in filth, they were born out of wedlock. To hide the shame and guilt of an act which cannot be justified in an Islamic society, the proof is discarded where others leave waste and leftovers. Since abortion in Pakistan is only permissible for saving the life of the mother, surgeries of such nature which are carried out in Pakistan, when there is no complication in the mother’s health, are performed by quacks in shady corners of cities.

The first disturbing fact of mothers abandoning their offsprings – whether a woman commits the crime to lessen the burden of her illicit relationship or to conceal the humiliation of rape – mostly points to burgeoning sexual frustration in our society. The causes and their impact are a separate debate.

The other disturbing fact is that 99 per cent, that makes almost all of these ill fated newborn babies, were girls. Does the humiliation of an illegitimate child – a remnant of lust or violence – lessen when the child is a boy? Do less fingers point at a rape victim or survivor of a relationship by choice when the consequence is a male child? The answers to these questions lie in the centuries old mindset which legislation, awareness, education and most importantly, not even the influence of Islam has eradicated.

Sons are preferred over daughters because they are still considered to be the helping hands of their parents. It’s another fact that the ‘helping hands’ may grow up to succumb to the irresistible lure of intoxicants or may simply choose to part ways and ignore their family ties of birth. Yet one more fact may also be noticeable, that those daughters who are kept away from school since they are to be married off at the first opportunity available, may from early childhood share the burden of their often abused mothers in their housework or menial jobs.

Sons are prized over daughters because when they marry, they add to the wealth of their families in the form of their wives’ dowries. Daughters are a burden, since in this case, the cost of dowry is to be borne. As a matter of fact, any cost borne on a daughter is futile, as after getting married she is expected to leave the house.

Sons are preferable, because no matter how much they indulge in any evil of the society, it is not a source of shame for the family, as they are merely enjoying their birth rights as a ‘mard’. Daughters are a source of shame, because whether an offence committed by them in a consensual manner or forced upon them, dishonours a family’s position in the society. And it is often to restore this very damaged ‘honour’ that daughters pay for with their lives.

Even if her life is spared at birth, a woman growing up in Pakistan is at risk of getting killed. If she is not privileged enough like few in this country, including myself who can write on this topic, she may not survive. If she is not brave or rather lucky enough, like Malala Yousufzai or Mukhtaran Mai, she may not be able to stand up against those who threaten her. She may be strangled to death like Qandeel Baloch or Sana Cheema, who after growing up years by her choice, was forced to succumb to that of her family for the biggest decision of her life. She maybe killed by her husband, like Saira the first female Careem driver in KP, out of sheer jealousy.

If a woman in Pakistan survives at birth, for many do and thus making up half of the population, she battles many attempts which threaten to take away her life. She may be made to suffocate under age old traditions by being denied the right to education. She may suffer at the hands of a friendly neighbour or relative in childhood, who robs her of her innocence. She may die a million deaths when paraded like cattle in front of prospective bridegrooms, only to be rejected over dowry deals. She may be scorched alive if the deals do not meet her in-laws expectations or even before that happens, she dares to refuse an agreed proposal. She may walk through fire everyday when through thin or thick veils, she brisks through strange hands and glances rummaging her body. She may live a new life every day, only to die each time, when her husband takes away all she has – her earnings, her dignity, her soul.

A millennium and a half later, we have forgotten the teachings of our religion. An infant girl, who is to grow up to be a mother, under whose feet lie the heaven, is tossed in a heap of garbage, while we chant glories of Islam at school admonishing ancient Arabs for burying girls alive. We might as well scrap the lies and deceits we print in our textbooks when in practice, we fail to respect a woman. Killed at birth or in youth, womanhood in Pakistan is not a celebrated fact. It is a crusade which it’s bearer, the woman, bravely wages against society. It will be a woman, who would one day, bring an end to all battles against herself.