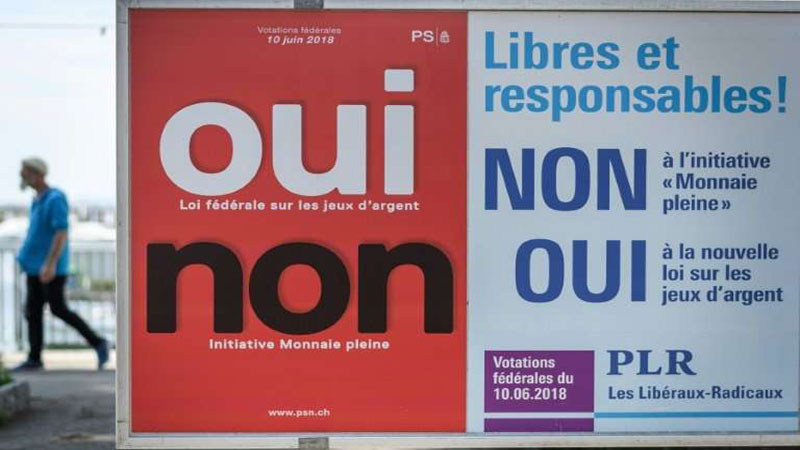 Swiss voters will decide on Sunday whether to back a new gambling law designed to prevent addiction and allow some online betting, or reject what opponents say amounts to internet censorship.

Recent polls indicate a clear majority plan to support the new law, which has already been passed by both houses of parliament, and now is being put to a high-stakes referendum.

The Swiss government says the Gambling Act updates legislation for the digital age, while raising protections against addiction.

If approved by voters, the law would be among the strictest in Europe and would only allow casinos and gaming companies certified in Switzerland to operate, including on the internet.

This would enable Swiss companies for the first time to offer online gambling, but would basically block foreign-based companies from the market.

This aspect of the law in particular spurred a coalition, made up primarily of the youth wings of various political parties, to gather more than the 50,000 signatures needed to launch a referendum.

Opponents have slammed Bern for employing “methods worthy of an authoritarian state”, with a measure that they claim is “censorship of the internet.”

“This sets a very dangerous precedent,” Luzian Franzini, co-president of The Greens’ youth wing and head of the campaign against the new law, told AFP.

Swiss Justice Minister Simonetta Sommaruga, however, insists that allowing only Swiss-based companies to sell gambling services is “indispensable” to ensure that everyone in the space adheres to strict rules, like blocking known addicts.

According to Addiction Switzerland, some 75,000 people in the small Alpine nation of 8.3 million inhabitants suffer from gaming addiction, costing the society more than half a billion Swiss francs (half a billion dollars) annually.

Bern also wants all of the companies’ proceeds to be taxed in Switzerland, with revenues helping fund anti-addiction measures, as well as social security and sports and culture programmes

“Voting ‘yes’ to the Gambling Act would allow us to stop this hemorrhaging,” she said.

According to GREA, an association that studies addiction, Swiss gambling and betting companies pulled in nearly 1.7 billion Swiss francs in 2016, of which more than half went to “the public good”.

But opponents claim Switzerland could make more money by issuing consensions to foreign companies that agree to be regulated and taxed. cAnd they charge the new law will actually drain away revenues, since it raises the threshold for taxable winnings to over one million francs, compared with 1,000 francs today.

Franzini said the law represents a windfall for Switzerland’s casinos, which had put “huge amounts of money into campaigning”.

He claims the “big difference in campaign money” was the main reason why opponents trail in opinion polls, with the latest survey showing 58 percent support for the law.

The 18-29 age group was the only one clearly opposed to the law in the gfs.bern poll.

“You could say there is a generation gap,” Franzini said, noting that the average age in the parliament that drafted the law is 53.

“They may not really have understood what this could do to the internet.”

Switzerland’s new gambling law is one of several issues facing popular votes Sunday at the national, regional and local levels as part of the country’s famous direct democratic system.

Voters will also be asked if they support a “sovereign money” initiative, which would legally bar any institution besides the central bank from creating new money.

Today, Switzerland’s central bank issues about 10 percent of the money in circulation, with the remainder issued virtually by private banks and other institutions when they provide credits to clients.

Monetary Modernisation (MoMo), the group that launched the initiative, worries that this system allows institutions to lend out more — sometimes far more — than they hold in their reserves.

This creates an unfair and unstable banking system that can fall prey to crises like the one the world suffered in 2008, the group argues.

“Sovereign money in a bank account is completely safe because it is central bank money,” MoMo explains on its website.

“It does not disappear when a bank goes bankrupt. Finance bubbles will be avoided because the banks won’t be able to create money any more,” it said.

In southern Valais canton, polls indicate that voters will snub a bid for the town of Sion to host the 2026 Winter Olympics.

Switzerland, home to the International Olympic Committee, has not hosted the Games since 1948.