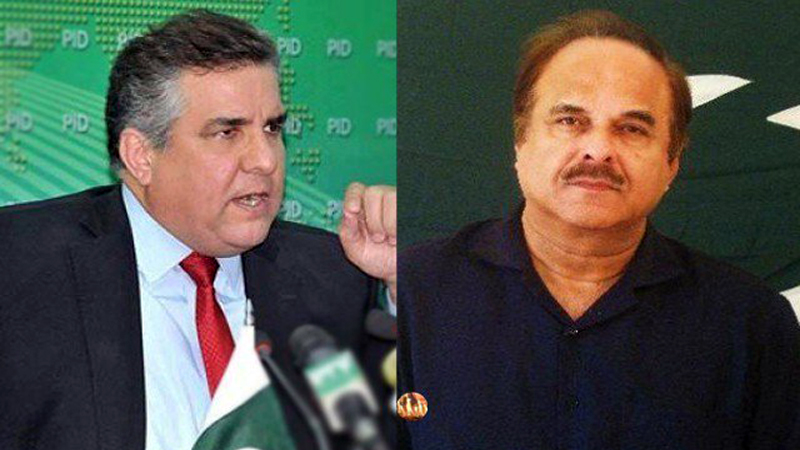 Business on the TV set was as usual – the incoming guests discussing the controversies of the day, breaking news announcements – with a lack of novelty news, the talk show was set to wrap up without much ado. But it didn’t. The big news was not about what the guests had said or even the topic under discussion, but what had unfolded on the set. Yes, this about what happened at recording studios of Geo Television in a discussion programme hosted by Muneeb Farooq on the evening of Tuesday, May 22, barely two hours before it was aired at 11pm.

As a debate between Federal Minister Daniyal Aziz and Pakistan Tehreek-i-Insaf (PT) leader Naeemul Haque (soon after the new rapprochement between the network and the PTI) reached a feverish pitch, Mr Aziz said something which indicated that the PTI harboured thieves in its ranks. If one watches the video clip carefully, it becomes clear Mr Aziz had not personally labelled Mr Haque a thief. But even if we presume that he had called Mr Haque a thief, the latter’s inordinate response was not only worse (Mr Haque uttered a word we find below our dignity and journalistic ethics to publish) but he went on to slap the federal minister. You have to give credit to Mr Aziz for not only refraining from slapping him in return, but also for not replying in kind to the leader of the party of “change”.

Pakistan Peoples Party leader Dr Nafeesa Shah, one of the guests on the show, had rightly walked out off the set, maintaining the finest tradition set by her leader Shaheed Benazir Bhutto. After the recording ended around 9pm, two hours before the show would actually go on air, nobody from the Pakistan Muslim League-Nawaz or the PTI requested the network not to air the episode. The network decided to air the slapping scene in its news and the programme itself by simply muting the abusive slur by Mr Haque.

Geo has been recording its shows at least a couple of hours for quite some time since it came under fire by the powerful establishment of the country. It had every opportunity not to air the slapping scene and still report the event in news. But it didn’t.

So why didn’t PTI request the network to not air it? Why did its chief Imran Khan not take any action against its leader who has acted as a bully on more than one occasion? Why did the party trolls celebrate the disgusting action? Senior journalist Fahad Hussain explained it one word: hubris. As pathetic it may sound, that is the sad reality of today’s Pakistan. Barely a week before the Parliament’s term comes to an end. What does it say about the election at times of huge acrimony? We will have to wait and see.

Why did the PML-N and Mr Aziz not try to stop the scene from being aired? Because it gave them a good chance to prove their moral superiority. Why would you want to lose a God-sent opportunity to get a leg up on your political rival in an election year?

Let’s look at what the network did. It aired the footage because it wanted to milk every rupee of the advertising revenue it would get. Jo Dikhta Hay, Wo Bikta Hay (the more views you get, the more money you make), has been the order of the day since the medium started dominating the scene, some decade and a half ago.

And that is what the network that dominates the TV spectrum decided to do. Lo and behold, every network picked it up and the news flooded the media, social media included. It has been aired over and over and over.

Nobody would argue against reporting the odious scene, but it could have been reported in more than a dozen ways without airing footage of the actual scene. What our media managers did not realise or, perhaps, did not want to realise is this: It is becoming party to speeding up the desensitisation of the society. It is simply the nemesis of ethical journalism. Journalism is not about free expression but restrained expression. That is why we have the institution of editor who decides what would be published/aired and what would be not.

Free media is reined in by its own ethical code that enables it to exercise the people’s right to know on their behalf. Not for the fear of the state (it is not any pillar of the state) but only in the best interest of the public at large. It is clear that the media house decided to air it not in public interest but in the interest of its financial balance sheet. It was the continuation of the un-ethical and irresponsible journalism being practiced on the box for over a decade. For the PTI, which has recently unfurled its 100 days plan before the public, one can only hope the silly scene is not a vile trailer of the ugliest movie to hit the screens in the event the party actually comes to power.