64 die due to heatstroke in Karachi 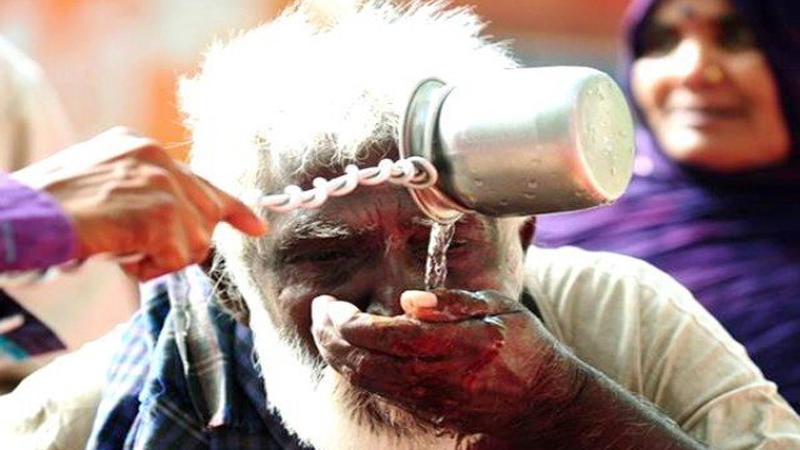 KARACHI: Two Edhi mortuaries in Korangi and Sohrab Goth areas of Karachi have received a total of 114 dead bodies, including 64 of people who died due to heatstroke and heat fatigues, since Saturday evening, Faisal Edhi told Daily Times.

However, according to Incharge Edhi mortuary Sohrab Goth, Imran, the number of deaths could be much higher as there are dozens of other mortuaries run by several private philanthropists, religious organisations and state-run morgues in the city, but no one yet knows the exact number of bodies these mortuaries and morgues have received in last three days.

Majority of the people died at home as they were not shifted to hospital on time. 64 people, who are said to have died due to heatstroke, are of different age groups, ranging from as young as 16 year to as old as 78 years.

“At Edhi mortuary Korangi, we usually receive 10 or 11 bodies every day, but since Saturday evening, we have received 34 bodies, while around 30 dead bodies were received at Sohrab Goth centre in last three days and these people died due to heatstroke and heat fatigues” Faisal Edhi told Daily Times over telephone.

Majority of the deceased were residents of different colonies of Landhi and Korangi town.

Sohrab Goth mortuary in-charge told that around 30 dead bodies were received since Saturday evening. “Though we do not record the cause of deaths in our register, but I have talked to the families and almost all of them have told the reason for deaths was heatstroke,” said Imran.

On Thursday, Pakistan Meteorological Department (PMD) issued an advisory saying that Karachi will be hit by heatwave from Saturday, May 19 and no sea breeze is expected.

“Hot to very hot weather is likely to prevail in Karachi during next 5-6 days and maximum temperature is expected to remain in the range of 40-43 degree Celsius during this period,” read the advisory, adding that the sea breeze was likely to remain cut-off.

Moreover, due to the holy month of Ramzan, most of the people are fasting, while the situation has also worsened due to acute water shortage and prolonged power shutdowns.

Among the deceased whose bodies were received at Edhi mortuary, Sohrab Goth, one was Tayyaba Shiraz, mother of one and resident of Badar Chowk, Orangi town. Talking to Daily Times over telephone, Tayyaba’s husband Shiraz Ahmed said that she was preparing food for Iftar in the kitchen when she collapsed all of sudden and died on spot. “She got severe heatstroke and died within no time,” said Ahmed.

Another deceased was identified as 87-year-old Shabeer Ahmed, resident of Lyari town, who was living with a relative. His relative, Yousif, said that he was at home when he suffered heatstroke. “When his condition worsened, we rushed him to a hospital but he died on the way,” said Yousif. His body was taken to Edhi mortuary, Sohrab Goth.

Another individual who passed away due to heat stroke was identified as Aamir Habib, father of 6 and a tailor by profession. Aamir’s brother Sajjid told Daily Times that he suffered from heatstroke and passed away before they could take him to the hospital. “He was working at home during a prolonged power shutdown, therefore he suffered from heatstroke and died,” said Sajid.

In 2015, Karachi was hit by one of world’s deadliest heatwaves that killed over 1,200 people and left around 40,000 with heatstroke and heat fatigues, however, independent sources said that the number of deaths were higher than the official count. Faisal Edhi, head of Edhi Foundation, estimated that there were more than 15,000 casualties in the city.

According to experts, a heatwave alert is when the city witnesses temperatures five degree Celsius above average levels for more than five continuous days. Since Karachi is a coastal city, it gets sea breeze around the clock that helps the city cool down during intense heat spells. But if the Arabian Sea also witnesses air depression, than the sea breeze to city cuts off causing deadly heatwaves.

Pakistan is sixth worst victim to climate change and several international bodies have warned that the country will be hit by deadly heatwaves in the coming years. With increasing population, rising number of vehicles, massive cutting of urban forest, massive use of concrete along with acute water shortage and prolonged power cuts, it is warned that Karachi is more vulnerable to heatwaves in the near future.