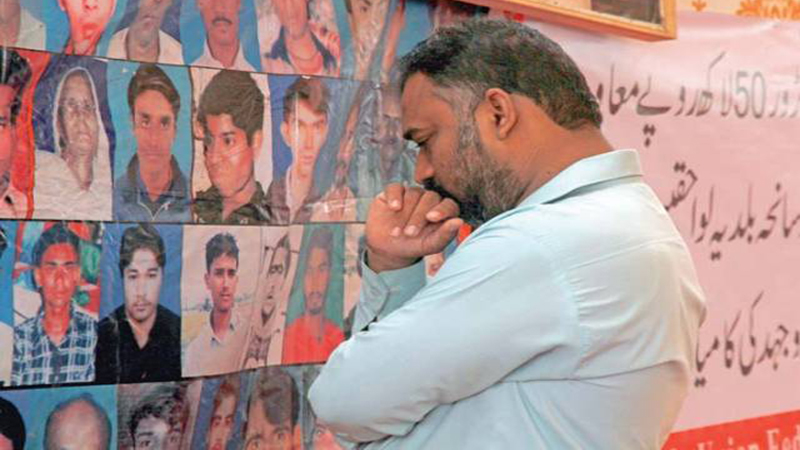 KARACHI: The families of all 209 victims of the Baldia Factory fire incident have started receiving long-term compensation, from the amount provided by the German textile buyer KIK, at a ceremony presided over by Labour Minister Nasir Hussain Shah and attended labour leaders as well at Arts Council of Pakistan, on Saturday.

International Labour Organisation (ILO) country director Ingrid Christensen, who played a key role in finalisation of documents for distribution of long-term compensation to the victims, was also present at the ceremony.

Over 250 workers had lost their lives in a deadly fire at the factory located in SITE Baldia industrial area on September 11, 2012. The main buyer, German company KIK Textilien, had provided US $ 1 million immediate relief as a result of signing of an MoU between KIK and PILER, which was distributed through Sindh High Court’s Commission headed by Justice (Retd.) Rahmat Hussain Jaffery. As an obligation under MoU, the KIK later provided US $ 5.15 million as long-term compensation. The ILO received the money and after calculation of pension rates, now it has started distribution through the Sindh Employees Social Security Institution (SESSI) of the provincial Labour Department.

Speaking on the occasion, the ILO country head said more than two years have passed since all stakeholders started work together for the long-term compensation for the victims’ families. “We’re happy that funds have been transferred and being distributed through SESSI.”

He appreciated the role of Pakistan Institute of Labour Education and Research (PILER) and other stakeholders. She also thanked to the Oversight Committees for their support.

She also thanked victim families for their passion and tolerance in such difficult situation. She said neither ILO, SESSI or Labour Department had charged any fee in the process, and they would not charge any in future either.

Labour Minister Nasir Shah also congratulated the stakeholders and victim families. He said the provincial government will construct a monument to honour the memory of the deceased. He said provincial government had already announced to observe September 11 as the Occupational Health and Safety Day every year.

PILER’s Executive Director Karamat Ali said it was a collective struggle of many organisations and victims families, who fought their case through international advocacy. He underlined the need for continuation of the struggle for workers rights. He said the EOBI pension to the victims’ families should also continue and in this regard, talks will be held with the department concerned.

He said ILO provided technical support in provision of long-term compensation to the victims, especially in determination of the pension rate. He said according to ILO, the living wages in 2012 were at Rs. 25,500 and if we add inflation, these wages should be around Rs. 31,000. He demanded to fix Rs. 30,000 as minimum wage for the unskilled workers.

Senior lawyer Faisal Siddiue, who represented PILER in Sindh High Court cases pertaining to Baldia Factory, said it was important to recognise that what we had achieved was because of a joint struggle, particularly of victims’ families’. He appreciated the role of the government and said in this case provincial government had played a very positive role. Now SESSI has to play an important role, he added.

He said without ILO’s intervention this landmark agreement was not possible. The German government had also played a key role in facilitating and focusing on compensation to the victims. He also appreciated the role of German company KIK, who not only accepted its responsibility but also provided compensation.

He, however, regretted that factory owners didn’t do anything for the victims’ families. “Nor they were arrested or fined, and the state and business community including chamber of commerce facilitated them to ran away out of the country.”

Siddiqi suggested building a Center of Excellence or a museum at the site of Ali Enterprises so the victim families can go there to pay homage to their loved ones.

He also suggested formation of a committee that can ensure enforcement of health and safety laws.

Saeeda Khatoon, Chairperson of Ali Enterprises Factory Fire Affectees Association, thanked everyone who contributed in the struggle. She said we can’t bring back to our martyred but can take care of their families.