Apart from various international conventions which have been ratified by Pakistan, the Constitution, Supreme Court rulings and Acts of Parliament also forbid the use of forced labour

Forced labour persists in all forms in almost all spheres of life in Pakistan. It is a sort of orderly suppression, in which the powerful develop vicious circles and the weak turn into imprisoned toilers, deprived of all fundamental human rights. It also refers to circumstances in which persons are forced to work through the use of violence or intimidation, or by subtler means such as collected debt, retention of identity papers or threats of denunciation authorities. Also, ILO defines forced labour as: “all work or service which is exacted from any person under the menace of any penalty and for which the said person has not offered himself voluntarily.”

Pakistan is a signatory to the relevant ILO Convention No.29 on ‘Forced Labour’, which was ratified in 1957, ILO Convention No 105 on ‘Abolition of Forced Labour’ ratified in 1960 and also ILO Convention 182 that was ratified in 2001 on ‘Worst Forms of Child Labour’. Moreover, Pakistan has also ratified: a) The 1956 UN Supplementary Convention on the Abolition of Slavery, the Slave Trade, and Institutions and Practices similar to Slavery; b) The 1989 UN Convention on the Rights of the Child, Article 32 of which guarantees children’s protection from economic exploitation and from performing any work that is likely to be hazardous or to interfere with the child’s education; and c) Philadelphia Declaration adopted by ILO in 1944 that stresses upon the member states to observe the principles regarding freedom of association and expression and work without exploitation and compulsion.

The issue is that of non-implementation, and is rooted in lack of political will or inability to implement the law

Since 1947, five labour policies have been announced by Pakistan government in the year 1955, 1949, 1969, 1972, 2002 and 2010. The tragedy we have is that more is said in the acts, policies and constitution, but less is implemented. Failure to implement can simply be comprehended by looking at overall country’s situation regarding bonded labour or all other kinds of labour and works. The poor who labour in the industries, agriculture, factories or in the mills are not given their due right of minimum wages; of whom, women are especially targeted, with low wages compared to men in all walks of life.

Moreover, the Constitution of Pakistan contains a range of provisions with regards to labour rights found in Part-II: Fundamental Rights and Principles of Policy. The Article 11 of the Constitution prohibits all forms of slavery, forced labour and child labour; Article 17 provides for a fundamental right to exercise the freedom of association and the right to form unions; Article 18 describes the right of its citizens to enter upon any lawful profession or occupation and to conduct any lawful trade or business; Article 25 lays down the right to equality before the law and prohibition of discrimination on the grounds of sex alone; Article 37(e) makes provision for securing just and humane conditions of work, ensuring that children and women are not employed in vocations unsuited to their age or sex, and for maternity benefits for women in employment; and Article 38 seeks socio-economic well-being of the people by raising their standard of living through adequate livelihood with reasonable rest and leisure. 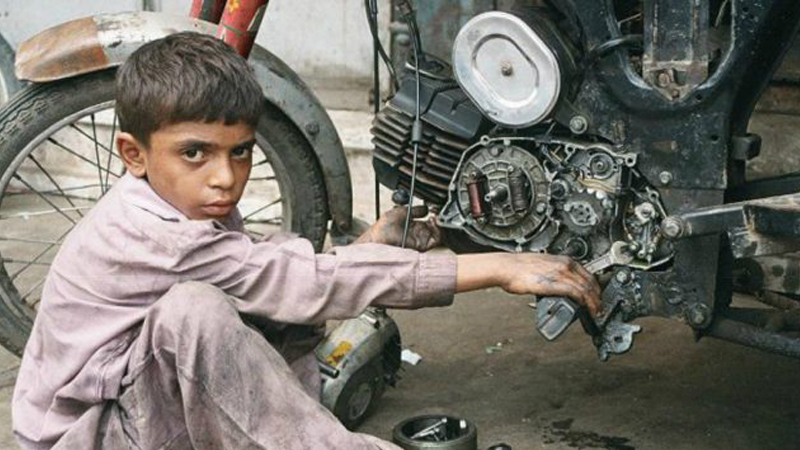 Besides, under this act, vigilance committee can carry out these functions: to advice the district administration on effective implementation of the Act, help in the rehabilitation of released and freed bonded labour, keep an eye on the working of the law, provide the bonded labourers such assistance as may be necessary to achieve the objective of the law, establishment of a complaint office and require the employer to provide information or any documents to perform its functions.

The government has also created a Bonded Labour System (Abolition) Fund which finances projects meant for training of the released bonded labourers. Further, this fund provides legal and financial assistance to the bonded labourers and family members. The Governments of Punjab and Khyber Pakhtunkhwa have also established Legal Aid Service Units (LASU) under above-mentioned fund to assist bonded labourers legally.

To curb the curse of forced labour from Pakistan, we need to build the capacity of various stakeholders which are involved in creating awareness among far-off rural poor communities. There should be strong policy level consultations and advocacy so that the concerned institutes and departments get vigilance and seriousness of the problem. More industrial and economic zones need to be initiated in the country to get away from increasing bondage labour as if there will be more industrial zones the chances of the labour force can be reduced. Moreover, training of government officials can be developed in record keeping as well as in enhancing their monitoring and vigilance mechanisms. Apart from various international conventions which have been ratified by the country, the Constitution, Supreme Court rulings and Acts of Parliament also forbid the use of forced labour. The issue is that of non-implementation and is rooted in either political unwillingness or inability to implement the law.