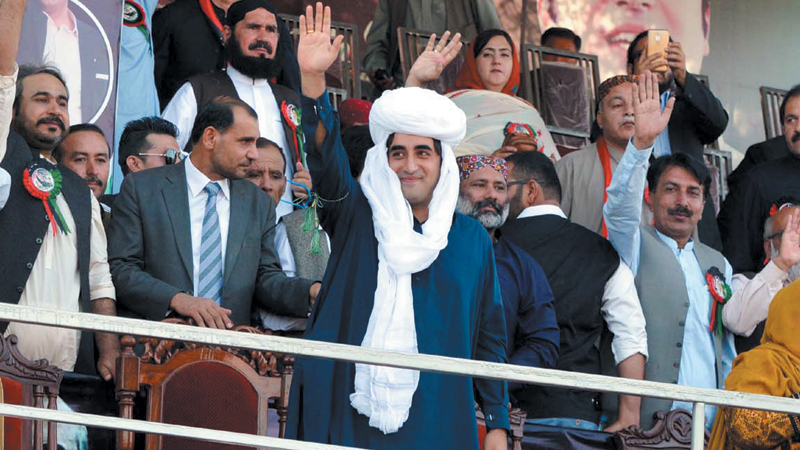 Quetta: “Those who haven’t lost loved ones don’t care if the National Action Plan (NAP) is not implemented. We have lifted bodies of our leaders and workers who lost their lives to terrorism. We will keep raising our voice until the NAP is fullyimplemented,” Pakistan Peoples Party chairman Bilawal Bhutto Zardari said on Friday.

He was speaking at a jalsa in Quetta.

“I am from an oppressed family and I know the pain of those who have lost their loved ones. Our politics is based on remembering our martyrs. I assure the Hazara community that their martyrs will never be forgotten,” he said, adding that he won’t rest until justice was served to the persecuted community.

Bilawala said ever since the assassination of his grandfather Zulfikar Ali Bhutto in late 1970s, ‘Bhuttos’ had been killed in every decade.

On arriving in the city, the PPP chairman held meetings with members of the Hazara community.

At the jalsa, Bilawal lashed out at his political rivals, saying that they were unaware of the pain of losing a loved one.

Bilawal said thousands of innocent people were being killed in the country, but no one paid heed until hunger strikes were staged.

He said PML-N quaid Nawaz Sharif and PTI chairman Imran Khan were engaged in a battle of egos and they were concerned just with power.

The PPP chairman further said that efforts to turn central Punjab into the hub of country’s politics in the wake of coming elections would be foiled. “Efforts are being made to make GT Road a centre of political activities,” he said, adding that Balochistan remained on top of the PPP government’s agenda when the party was in power.

On the other hand, the PML-N had done nothing for the people of the province, he said.

Bilawal dismissed allegations that his party had bought votes of Balochistan lawmakers in the Senate polls, saying that desired results could also be achieved through dialogue and by addressing genuine concerns of politicians. He said the PPP’s opponents didnt realise that all one needed to do sometimes is to reach out to people and to address their concerns.

The PPP chairman assured the people of Balochistan of getting benefits from the China-Pakistan Economic Corridor (CPEC) if his party was elected to power in this year’s general elections. “You will be offered job opportunities if you vote for PPP. We will make Gwadar port an exceptional port.”