Despite fire-fighting at full steam, blaze at textile mills continued past 24 hours 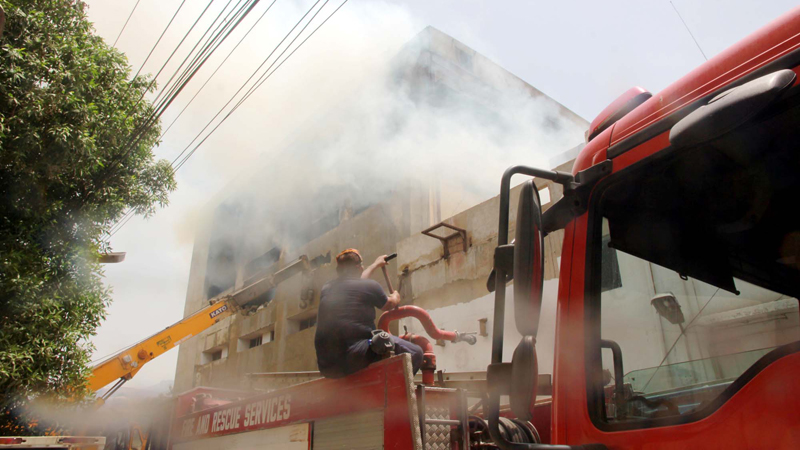 KARACHI: The firefighters remained unable to completely put out a third-degree fire at a textile mill in one of the industrial areas of the city despite the passage of 24 hours around 8pm on Friday.

The fire had started on Thursday night at the Lucky Textile Mills, located near the Lucky One Mall on main Rashid Minhas Road within the limits of Federal B Industrial Area police station.

Even after the passage of 24 hours, fire fighters said that they could not give any timeframe in which the fire would be extinguished.

“It is a third degree fire,” says Tehseen Siddiqui, chief fire officer of the Karachi Municipal Corporation. “We have been unable to control the blaze despite hectic efforts.” Siddiqui said that the mill’s administration called some firefighters from a private firm who broken a wall to move inside but the move backfired. “By breaking the wall, they provided a passage to oxygen in the atmosphere outside to flare up the fire.”

Fire fighters from the entire city, including those of Pakistan navy were participating in the effort by the time this report was filed. An extra contingent of law enforcers was also present at the site to avoid any untoward incident. Rescue teams and at least 15 firefighters of the fire brigade and three of the Pakistan Navy were busy in dousing the fire that had turned goods worth millions of rupees into ashes. No loss of life was reported in the incident as there was no worker at the industrial unit at the time of the incident.

Federal B Industrial Area SHO Sajid Javed said that no loss of life had been reported in the incident, adding that the cause of the fire had yet to be ascertained.

Following the fire, the electricity of the nearby residential areas was cut-off. K-Electric officials said that they would be able to restore the electricity only after the fire brigade had completed its work.

Residents of the area, however, demanded that their supply from the industrial unit should be disconnected and should be connected to a residential feeder to avoid such incidents in the future.