How the establishment is pushing Pakistan towards another civil war

By ignoring the genuine grievances of the Pakhtun, Baloch and Muhajirs in Pakistan, the establishment is repeating the same mistakes it made that led to the dismemberment of Pakistan in 1971

There has been a complete blackout of the Pakhtun Tahaffuz Movement (PTM) in the Pakistani media. The PTM, one of the largest movements in the country’s history, is a culmination of the efforts of ordinary people as opposed to a mass demonstration organized by any political party. Young activist, Manzoor Pashteen, is the latest victim of engineered social media campaigns, accusing him of being a ‘traitor’ and ‘blasphemer’. In fact, social media accounts, of Internet bots and those masquerading as journalists, have consistently strived to discredit and slander the PTM by trying to link it to Indian intelligence agencies (an age-old tactic of quelling dissent in the land of the pure).

By ignoring the genuine grievances of the Pakhtun, Baloch and Muhajirs in Pakistan, the security establishment is repeating the same mistakes it made that led to the dismemberment of Pakistan in 1971. The rhetoric that was proudly used as a propaganda tool back then is similarly being adopted now. Instead of this rhetoric and anti-state labelling, the solution to this conflict is rather straightforward, considering the basic nature of the demands of the PTM, namely ending enforced disappearances (which are already illegal under the Constitution) and safeguarding the rights of the Pakhtun as equal citizens of Pakistan.

There have been extrajudicial killings of the Pakhtun and Baloch for decades now and there has been no real change on ground vis-à-vis the security establishment’s policy towards these marginalised and oppressed groups. Now that these people have finally had enough and are demanding that they be treated with dignity, the State has decided to ignore their voices by deflecting from its own excesses.

Let us not forget that the only transition from one democratic government to another took place as recently as the year 2013. The establishment is not going to let go of its power and influence without a fight — even if their methods of warfare push the country into a civil war

As if this situation wasn’t alarming enough, another pot is bubbling just waiting to explode. The Tehreek-i-Labbaik Pakistan (TLP) sit-in in Lahore ended after over a week with complete capitulation of the state apparatus to the organisation’s fascist designs. Their leader, Khadim Hussain Rizvi, is a proclaimed offender with whom the Pakistani military concluded a ‘peace agreement’ just a few months ago, after his party’s 21-day-sit-in in the federal capital. That a handful of the TLP activists, here and there, are able to bring the whole country to a standstill give the impression that Rizvi is being used to destabilise the civil government on the alleged pretext of blasphemy.

While all this has been going on, a media channel allegedly sympathetic to recently disqualified Prime Minister Nawaz Sharif got taken off air, while both the government and the Pakistan Electronic Media Regulatory Authority (PEMRA) denied having ordered that censorship.

One wonders if this is all part of the ‘Bajwa doctrine’ — the ‘off-the-record’ briefing by the Chief of Army Staff to a select group of media personnel on the supposed threats faced by Pakistan, and how the military intended to protect the judiciary against any threats. 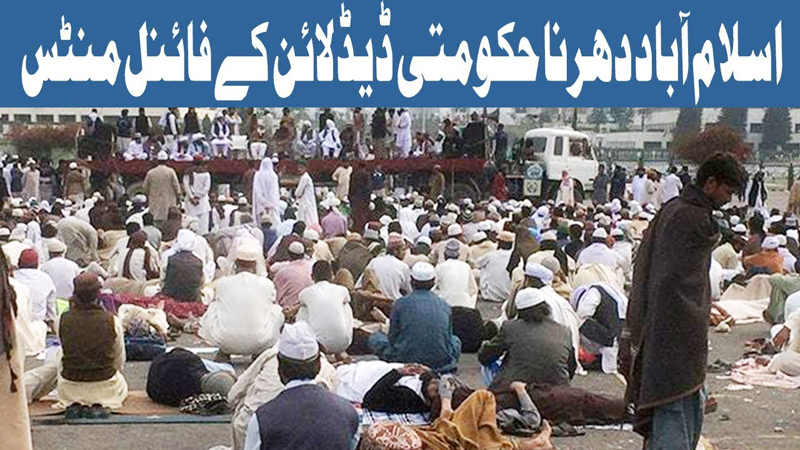 It is no secret that the security establishment in Pakistan has been a sacred cow, above any and all criticism, immune from accountability by elected institutions, and the self-styled custodian of Pakistan’s ‘national’ interests. As per this narrative, journalists, academics, intellectuals or anyone even remotely critical of the establishment’s disastrous policies (in supporting extremists, destabilising democracy, etc.) has been abducted at random, tortured, murdered, or has simply ‘disappeared’.

As the civil government desperately holds on to the very little power in its hands, the establishment is preparing for full-blown chaos that allows them to sweep in as the chosen messiahs for the umpteenth time in Pakistan’s history. Unfortunately for the establishment, this is perhaps the first time in our history that ordinary people have spoken up in support of civilian supremacy, clearly pointing the finger at the former for the damage it has done to the State’s institutions.

Of course, such awareness needs to be systematically crippled through new and improved propaganda tactics, including but not limited to extending support to the judiciary. The military-judiciary nexus is, however, not a novel partnership in Pakistan. After all, previously judges in Pakistan have even taken oath under military dictators.

But someone on the outside (or even those who continue to buy the security-centric narrative) may wonder: what is all this chaos being fuelled for? The answer lies in a bird’s eye view of two things: budget allocations and corporate interests. The army in Pakistan has numerous business interests, including in fertilizer, cement, property development, banking, dairy, poultry and the list goes on. On top of their private commercial activity, they are also allocated massive shares of Pakistan’s budget without any debate.

Let us not forget that the only transition from one democratic government to another took place as recently as the year 2013. The establishment is not going to let go of its power and influence without a fight — even if their methods of warfare push the country into a civil war. But the question Pakistanis should be asking right now is not whether they fear a civil war but whether they are willing yet again to choose chaos in the long-term for a false sense of order in the short-term?

The writer is a lawyer. She Tweets: @ImaanZHazir